Almost a month ago, from today, I made a bearish call on iShares MSCI Brazil Capped ETF (EWZ). As most of you may know, a bearish call on EWZ is the same thing as a bearish call on Brazil’s currency and principal equity index (iBovespa). My bearish call is not the type of call where the investor could generate alpha by shorting EWZ but the type where an investor would be better off investing in a less risky index like the S&P 500, for example (think Sharpe ratio).

EWZ’s benchmark is the MSCI Brazil 25/50 index, which gives investors exposure to Brazil’s Blue-Chip stocks and its currency (“BRL”). During times of economic turmoil, the FX-rate and index become strongly correlated, thereby doubling an investor’s risk. Several companies in this index have been involved in political corruption over the past five years. Please be aware of all the risks associated with investing in an emerging market.

Every Saturday, I update the model inputs that I use to calculate EWZ’s target price. While doing so, I noticed that the Brazilian Real (BRLUSD) had lost more of its value than the Argentinian Peso (ARSUSD) on a year-to-date basis.

The time frame used to calculate the returns in Figure 1 is from 01/31/2020 to 08/31/2020. I choose this period in hopes of measuring the effects of COVID-19 on Latin America’s largest economies. Figure 1 shows that BRL, ARS, and MXN were down 21.3%, 18.5%, and 13.7%, respectively. As I said earlier, what caught me off guard was that the Brazilian Real underperformed the Argentinian Peso during the period. 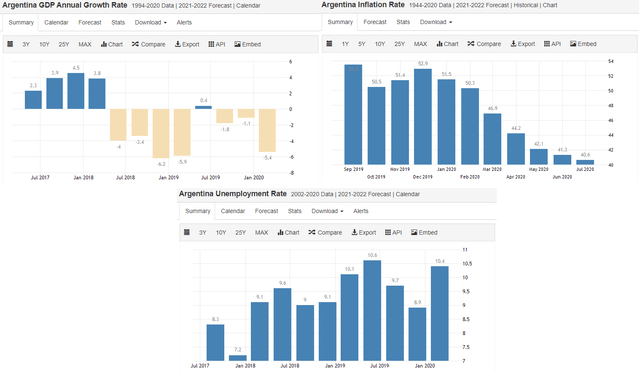 Argentina’s GDP has been on a steady decline since mid-2018. In 1Q 2020, its GDP decreased by 5.4%. “It was the sharpest contraction in a year, amid the coronavirus pandemic,” was what Trading Economics reported on the data. In the Americas, 1Q 2020 was when the adverse effects of the coronavirus began (mainly in March), but its full impact was felt in Q2 2020. Trading Economic analysts believe that Argentina’s GDP will decline in Q2 and Q3 by 14% and 8%, respectively. Over the past four quarters, TE analysts have been overly pessimistic about Argentina’s GDP forecasts on average by 130bps. I wouldn’t be surprised if estimates come in at -12.7% and -6.7% in Q2 and Q3, respectively. Even then, Argentina’s GDP in Q2 2020 will have declined more than Brazil’s.

Inflation has been steadily declining since December 2019. The Central bank’s benchmark interest rate policy has been putting downward pressure on inflation. Argentina’s unemployment rate rose to 10.4% in Q1 2020 and is expected to reach 11.3% in Q3 2020. 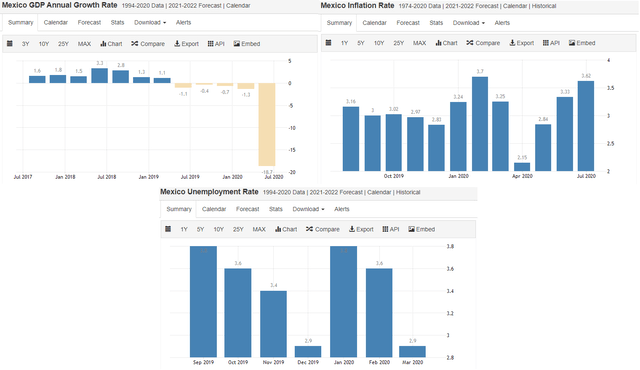 In Q2 2020, Mexico’s GDP decreased by 18.7% due to the adverse effects of the coronavirus on industrial, retail, construction, and hospitality sales. According to Analysts at Trading Economics, in Q3 2020, GDP should decrease by 10%. A 10% decline in GDP is almost as much as how much Brazil’s GDP declined in the second quarter, which was the most negatively affected by the coronavirus.

The country’s inflation rate has been steadily increasing due to an increase in prices of housing and utilities, miscellaneous goods and services, and healthcare. 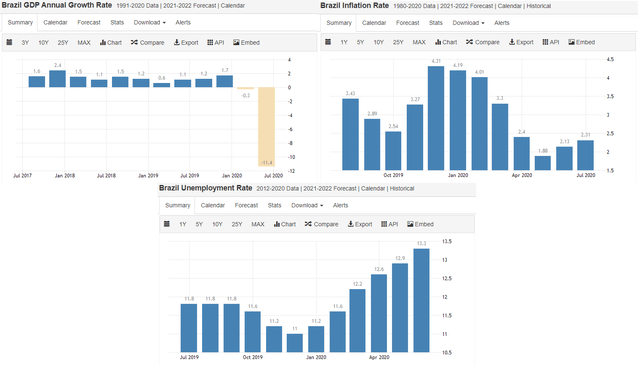 Brazil’s GDP decreased by 11.4% in Q2 2020, and analysts believe it will decline by 8% in Q3 2020. Inflation has slowly increased over the past few months but easily within the Brazilian Central Bank’s inflation range target. Brazil’s GDP and inflation are both doing better than those of Mexico and Argentina.

For those that do not know, seasonality is present in the Brazilian unemployment rate. Usually, seasonality tops out in March of every year, but this year it kept going due to the pandemic. Analysts believe that the unemployment rate will top out at 13.7% in August, 40 basis points higher than June’s rate. The highest unemployment rate has ever been was 13.7%, and this occurred in March 2017. In Brazil, from April until August is the harvest period for the majority of Brazil’s essential agricultural products.

A study by the World Bank found that countries whose debt-to-GDP ratios exceeds 77% for prolonged periods, experience significant slowdowns in economic growth.

Of the three countries in Table 1, Argentina is the only one with a debt-to-GDP ratio above 77%. Brazil is very close to surpassing 77%, with a current ratio of 75.79%. Mexico’s debt-to-GDP is at 45.5% and has continuously been declining since 2016. One problem with the data in Table 1 is that it is only updated every year. The second problem is that we know these ratios will be worse in 2020 because of the stimulus packages that increased debt and the coronavirus that decreased GDP.

It is probable that Brazil’s debt-to-GDP ratio in 2020 will be higher than 77% but still should be better than Argentina’s ratio.

Based on the data in this article, I believe the market is being too pessimistic on the Brazilian Real. In 1H20, Brazil’s GDP decreased less than Mexico’s and Argentina’s GDP (Argentina’s 2Q20 GDP is based on TE and my estimates). Brazil’s Inflation rate is under control and at the lower end of the BCB’s inflation target policy range, while Argentina’s inflation rate is still in the double digits. Brazil’s debt-to-GDP ratio puts it in between Argentina and Mexico, yet its currency was devalued more than Argentina’s. Based on the data, I believe that the Brazilian Real should be down by about 15% (R$ 5,00) and not 21.3%.

If you like what you read, please “Follow” me via Seeking Alpha. I typically only cover the Brazilian markets, the Robotics Industry, and the Food Industry.

DexCom’s (NASDAQ: DXCM) success can be attributed to the rapid adoption by the diabetic community of its innovative continuous glucose monitoring (“CGM”) system. This disposable device worn on the body continuously downloads the patient’s blood […]

Last week, I made the argument that the GBP/USD would likely see more downside from here. With the current UK government proposing an Internal Market Bill that overrides certain agreements agreed with the EU in […]