Warren Buffett has pulled the trigger on $6 billion of investments into Japan’s five biggest trading houses. The FT described them as “century-old commodity specialists that are increasingly transforming into global venture capital and private equity businesses”.

This is article is one of a series of five where I go over the Sogo Shosha. In this article, I’m going to look at Marubeni Corp. to ascertain what attracts Buffett to these names. It is the fourth installment in a series on the Japanese trading houses. You can read the first installment on Mitsui & Co. here, the second installment on Itochu Corp. here, the third on Mitsubishi Corp. here and the fourth on Sumitomo Corp here.

First, let’s look at what Marubeni Corp. is actually engaged in. All the trading houses are basically conglomerates that were historically more geared towards commodity-related activities. But all the houses have been diversifying beyond those industries. Often, the houses have hundreds or even in excess of a thousand stakes in businesses. Some are considered subsidiaries and are consolidated if the company holds a 50% or larger stake. Stakes between 20% and 50% are accounted for using the equity method.

Under normalized circumstances, companies like Helena Chemical company and the 75% stake in Aircastle alone could be worth close to $10 billion by themselves as independent publicly traded companies.

All the houses are very focused on reinventing themselves with an eye towards the future. In Marubeni’s case, it looks at a number of growth themes. The company doesn’t specifically lay out which sectors it is going to invest in (which I prefer as it leaves a more opportunistic approach dependent on how the future unfolds). But it does identify these themes, image below comes out of its annual report, and there’s nothing really surprising there:

The company does specifically state it is looking to grow towards 300 billion yen of net income per year in 2021. That’s a lot more than it’s currently doing but it has achieved 240 billion in past years.

To call out a few governance things I’m not thrilled with the performance-based compensation formula. It is based on a sum of consolidated net profit and core operating cash flow. I like per share metrics better. These metrics encourage empire building and discourage share repurchases.

I think it is commendable that the firm tracks metrics like female employees in executive positions. But 5.9% is painfully low. To add some context, Catalyst estimates 29% of execs on a global basis to be female.

I’m impressed with the company’s long-term direction and believe it stands out among the houses. The company specifically calls out a shifting balance of world powers as a global change towards 2030 and expects disruptions to be the status quo. It also views change as offering opportunities and is highly focused on threats to existing business models. In my humble opinion, it is a huge advantage if management recognizes the limited shelf life of its businesses and strategies. That will allow them to manage assets appropriately and make the most of them. Instead of endlessly trying to prop up zombie businesses.

Finally, the company paid fines in 2012 and 2014 to settle government cases related to alleged bribery of Indonesian and Nigerian officials according to its Wikipedia.

On to some of the positives, here’s a quote from the annual report that spoke to me:

We extensively engaged in frank discussions with employees, who have built our existing business models, asking them how long they expect those business models to last under an organizational structure based predominantly on product verticals, the conventional trading company framework. We were told that current business models would survive for another 2-3 years, 4-5 years or in some cases 10 years but there were few business models that frontline employees were confident would survive beyond 10 years.

This demonstrates the ability of management to be reflective and allow criticism. Threats can be signaled in time. The estimates seem incredibly bearish to me. Maybe these sorts of timelines are true if we’re talking about products that are not adapted at all but a lot of businesses in Marubeni’s segments like aircraft leasing or retailing farmers products are not all that prone to instant disruption. I still applaud the fact they’re assuming the business are under constant threat.

The company intends to generate operating cash flow (excluding divestments) of about $11 billion in the next three years. That’s a lot on a market cap of $10.76 billion and $27 billion of enterprise value. By my estimate, if it gets anywhere close about $9 billion of that would truly be free operating cash flow (ie no reinvestment needed to sustain the cash flows). It is likely to plow most of that money into debt reduction and further investments but also promises a 25% payout ratio of its income through dividends.

Management also talks about flexible buyback programs depending on what the growth investment pipeline looks like. I’d love it if they would execute buybacks based on the company’s discount to intrinsic value but maybe that’s too much to ask for.

Marubeni’s price appreciation has lagged its book value accretion since the financial crisis.

Earnings and cash flow didn’t quite grow to the same degree.

Its return on equity currently looks terrible but since the previous financial crisis, it actually did really well on that front.

Several segments are suffering quite a bit from the COVID-19 induced stress.

The last financial metrics I want to highlight are its large cash position and debt positions related to its equity value. The company has $23 billion in debt and $6 billion in cash. Its 3-year debt trades at a yield-to-maturity of about 1%. In other words, the bond market sees no problems here. Interestingly both the cash and debt are slowly coming down over time.

Overall, the valuation looks highly attractive. On a price to earnings level, it trades at 6.4x earnings, at 0.74x book value, and at 3.73x free cash flow.

It is very well possible that these metrics understate the value of some of the underlying businesses. One interesting asset Marubeni owns as a result of historical accumulation is a collection of western and Japanese art and kimono’s. The Western collection includes painting like La Bella Simonetta by Boticelli. 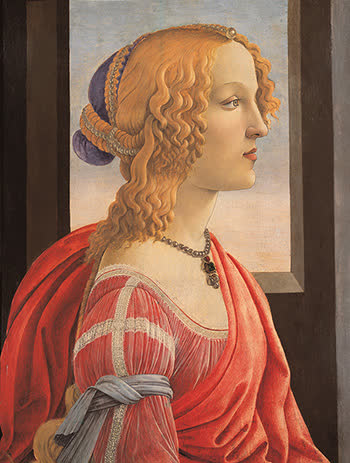 I don’t know much about art but understand something like that is not impossible to go for $10-$30 million.

A fair amount of the book value consists of cash which is a very solid underlying.

Personally I like this trading house the best among those I’ve reviewed. Except for this year, the numbers look quite good. It is trading at a deep discount to book although not to the degree of Sumitomo Corp. Management is reflective and thinking about the corporation’s vulnerabilities. It also laid out some audacious goals that can be achieved. If it even comes close I don’t understand why it would be trading at such low multiples. Meanwhile, it pays a dividend of about 5% while promising to maintain a payout ratio of 25%.

Check out the Special Situation Investing report if you are interested in uncorrelated returns. We look at special situations like spin-offs, share repurchases, rights offerings and M&A events. Ideas like this are especially interesting in the current late stages of the economic cycle.

Disclosure: I/we have no positions in any stocks mentioned, but may initiate a long position in MARUF over the next 72 hours. I wrote this article myself, and it expresses my own opinions. I am not receiving compensation for it (other than from Seeking Alpha). I have no business relationship with any company whose stock is mentioned in this article.