Similar to many investors, selecting investments is like a game of chess whereby my pieces or in this case my capital is essentially limited. Whilst I still believe Exxon Mobil (XOM) makes a suitable contrarian income investment, it does not mean that superior investments cannot subsequently be found, which in this case has been the relatively underfollowed USA Compression Partners (USAC), hereon referred to simply as USAC. It would be more beneficial to take advantage of the superior investment right now instead of ignoring it simply because of insufficient additional capital.

The exact operational nature of their businesses is obviously different with Exxon Mobil being a diversified oil and gas supermajor that also produces various downstream refined products and chemicals. This sits in contrast to USAC who specializes in the midstream industry through providing high horsepower compression units that are crucial in the production and transportation of natural gas.

Despite these clear operational differences, they both have similar underlying forces that drive their returns, being demand for fossil fuels. So this means that unless either faces a black swan event, if the tide rises and lifts Exxon Mobil, then it too will lift USAC and vice-a-versa. This situation means that there should be at least a moderate, if not a strong, positive correlation between their future returns in the medium to long term, which leads to the second reason.

There are currently significant uncertainties surrounding the future for the oil and gas industry, both in the short and long term. If USAC has a terrible long-term future, it would almost certainly stem from natural gas production permanently collapsing. This would almost certainly only happen if demand enters into a fast secular decline as the world moves away from fossil fuels to clean renewable energy quicker than expected.

Under this hypothetical scenario, there is no realistic reason to expect that Exxon Mobil, who has been often criticized for focusing on fossil fuels, is going to be performing materially better than USAC. Natural gas is often promoted as the cleaner of the fossil fuels that in theory has the brightest future and thus under this same hypothetical scenario, demand for oil would also decrease massively and thus not provide any refuge. When looking at the short-term uncertainties, they largely stem from the economic uncertainties created by Covid-19 and the path forward towards a hopeful recovery in the coming years, which leads to the third reason.

This latest downturn has been very tough for many companies across virtually every industry and this certainly was no different for Exxon Mobil who has faced such an impact to their earnings that their legendary dividend is now sitting in danger of being reduced. This is one of the starkest contrasts between these two potential investments, with USAC seeing their operating cash flow and revenue during the first half of 2020 remaining essentially unchanged year on year, as the graph included below displays. 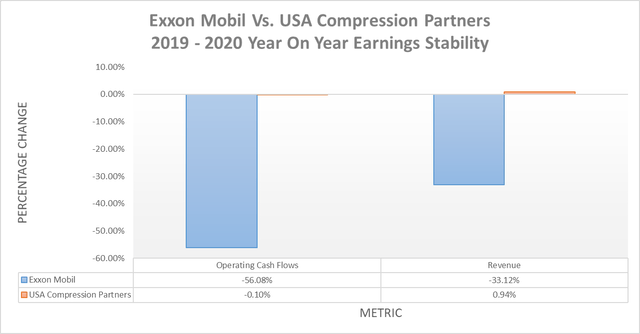 When looking at these two potential investments, the first aspect that many investors will notice is the spread between their dividend and distribution yields. Although the high 8.83% dividend yield from Exxon Mobil is much higher than historically normal, it nonetheless is still dwarfed by the 18.78% distribution yield offered by USAC, as the graph included below displays. 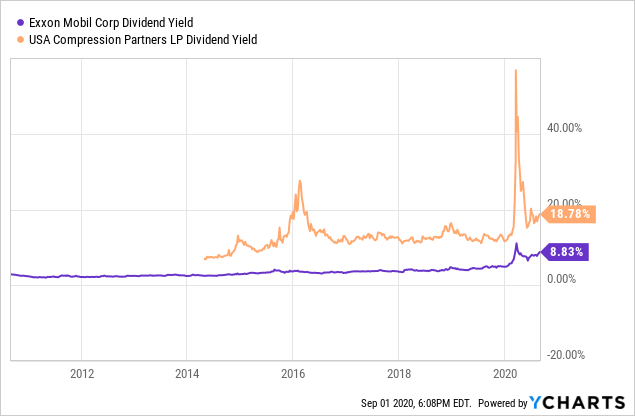 The spread between their relative yields is so extreme that even if USAC halved their distributions, their yield would still exceed that of Exxon Mobil even if they manage to defy the current pressure and thus sustain their dividends. It seems as though that the proverbial clock is ticking for the latter as discussed in my previous article and thus their bullish scenario is for their dividends to be sustained. Meanwhile, based upon my previous analysis, it appears that USAC can possibly sustain their current distributions but at worst they would share a similar bearish fate as Exxon Mobil. This ultimately means the relative outlooks for the sustainability of their dividends and distributions are quite similar in terms of safety, which feeds into the fifth and most important reason.

Regardless of the income that they offer investors, the whole purpose of investing is acquiring assets at less than their intrinsic value and thus generating alpha. Since they are primarily desired by income investors, their intrinsic values were estimated by using a discounted cash flow valuation that simply replaces their free cash flow with their respective distribution and dividend payments.

To illustrate, the results of a Monte Carlo Simulation have been provided with a wide range of 121 different cost of equity assumptions for both individual scenarios. It can be seen in the graph included below that their individual split between intrinsic values above and below their current share or unit price is still more favorable for USAC than Exxon Mobil. These are very impressive results for the former and thus indicate that their unitholders face less downside risk even if they were to suffer a bearish outcome versus a bullish outcome for those holding Exxon Mobil. 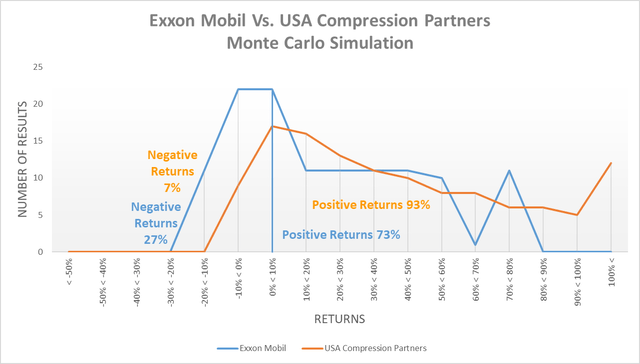 The Monte Carlo Simulation utilized a wide range of 121 different cost of equity assumptions, which include expected market returns from 5% to 10% and risk-free rates from 0% to 5%, both of which used 0.5% increments. The 60M Betas utilized were 1.03 (SA) for Exxon Mobil and 1.36 (SA) for USA Compression Partners.

Similar to other aspects of life, the construction and maintenance of an investment portfolio often require changes as more information comes to light. Whilst I still believe that Exxon Mobil offers investors a desirable contrarian income investment, USAC is simply so attractive that when markets next open, I plan on dumping my Exxon Mobil shares to fund the purchase of their units. Following this analysis, I believe that upgrading my rating on USAC to very bullish is appropriate whilst maintaining my bullish rating on Exxon Mobil.

Notes: Unless specified otherwise, all figures in this article were taken from Exxon Mobil’s Q2 2020 10-Q and USA Compression Partners’ Q2 2020 10-Q SEC Filings, all calculated figures were performed by the author.

Disclosure: I/we have no positions in any stocks mentioned, but may initiate a long position in USAC over the next 72 hours. I wrote this article myself, and it expresses my own opinions. I am not receiving compensation for it (other than from Seeking Alpha). I have no business relationship with any company whose stock is mentioned in this article.

This is about the sector Yes, it’s possible to point to specific companies, like Hammerson, or Land Securities, who are being and will be impacted by this. Intu of course has already been driven over […]

Welcome to the peak bearishness edition of Oil Markets Daily! Fundamentals do not determine when markets top or bottom, sentiment does. And this week’s media headlines have been nothing but bearish for oil and the […]