Acceleron Pharma (NASDAQ:XLRN) in 2019 became a commercial stage pharmaceutical company when Bristol Myers Squibb (NYSE:BMY) started marketing Reblozyl for anemia associated with beta-thalassemia. Acceleron developed and licensed Reblozyl to Celgene, which was then absorbed into Bristol Myers. I look forward to seeing a good Reblozyl royalty ramp when Acceleron reports Q3 results around November 4, 2020, and I will cover that briefly. The focus of this article, however, is the potential of sotatercept, which has become clearer lately. Currently, Acceleron has not licensed this potential therapy, which means it can either commercialize it itself or demand a premium if it does license it out.

Reblozyl (luspatercept) generated royalties of $11.1 million for Acceleron in Q2 2020, up from just $1.5 million in Q1. Bristol Myers reported $63 million in Reblozyl sales in Q2. Neither Bristol Myers nor Acceleron broke down sales or royalties by disease type. The beta-thalassemia anemia indication started generating sales in late Q4 2019. The MDS (myelodysplastic syndromes) anemia indication was approved by the FDA in April, so could have added to Q2 sales. MDS is the much more common indication, so we should see a good ramp in Q3. There should be some sales in Europe in Q3, though, after an EU approval, drugs get reimbursement approval on a country-by-country basis. Canada approved the drug for beta-thalassemia on September 29, which could help the ramp in Q4. Bristol and Acceleron plan to extend the label as well, with lower risk MDS and myelofibrosis being upcoming expansion targets.

Acceleron made a lengthy sotatercept presentation on October 2. Based on positive Phase 2 data for PAH (pulmonary arterial hypertension), Acceleron is planning to launch the STELLAR Phase 3 trial before the end of 2020. It will treat 284 patients randomized between their prior PAH therapy and that therapy with sotatercept added. The primary endpoint will be change from baseline in six-minute walk distance, at week 24. A key secondary endpoint includes two add additional components, improvement in functional class and RV (right ventricle) function, as shown on this slide: 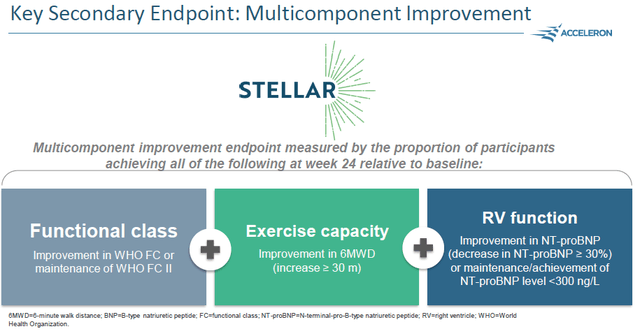 In addition to the main STELLAR trial, two other Phase 3 trials will be conducted to enable label expansion. HYPERION is an early intervention study, and ZENITH is a later intervention study. Both of these trials should start in the first half of 2021. But data from these trials should not be necessary to gain regulatory approval of sotatercept. Acceleron also expects data from the open-label extension portion of the Phase 2 study to be updated in the first half of 2021. More data from early studies will also be released at the American Heart Association Congress in mid-November this year.

It should be noted that the therapies for PAH, referred to as background therapies when patients are taking them before and during the trials, are not very effective. There are no cures, a majority of patients do not reach treatment goals, and long-term survival is limited. Sotatercept has a mechanism of action that appears to have the potential to reverse the disease. If approved, that will make it very attractive for patients and their long-term care.

PAH is not a common disease. There are perhaps 1,000 new cases in the U.S. each year, though many cases likely go undiagnosed. The original sotatercept label will not cover all cases. But, given the deadly nature of the disease and its rarity, pricing of the drug will likely be high, with little resistance from payers. Once on the drug, patients are likely to stay on it, unless a better drug becomes available. So, revenues could be significant, at least for a company of Acceleron’s size. The timing of first revenue depends largely on how quickly the STELLAR trial can be enrolled, and management has not projected an exact timeline, but it could be in late 2022 or early 2023.

In Q2 2020, in addition to royalties from Reblozyl, Acceleron earned a $25 million milestone payment from Bristol Myers. Backing out the milestone payment, cash used was about $43 million. I expect the burn rate to decrease going forward as Reblozyl revenue ramps, but there may be some increase in expense as well. In any case, the cash and equivalents balance at the end of the quarter was about $390 million, so the company should have cash to operate for about two years, longer if royalties ramp significantly.

We are coming up on Q3 results, and Phase 3 results for sotatercept are likely over a year away. In the short and mid-term, the ramping of Reblozyl royalties and the expansion of that label will be the key factor in determining the stock price of Acceleron. Note that Acceleron, at the closing price of $110.11 on October 6, 2020, had a market capitalization of about $6.6 billion. Also note the closing price was near the 52-week high of $114.87, so short term volatility in the down direction is possible. However, given the significant royalties likely from Reblozyl and the significant chance that sotatercept will get regulatory approval after Phase 3 trial results are reported, I believe Acceleron will continue to climb in valuation over the next five years.

Disclosure: I am/we are long XLRN, BMY. I wrote this article myself, and it expresses my own opinions. I am not receiving compensation for it (other than from Seeking Alpha). I have no business relationship with any company whose stock is mentioned in this article.