The airline industry has been hit hard by the lasting impacts of the COVID-19 crisis. A decline in air travel has caused many airlines to drastically cut capital expenditures, leading to a near-complete decline in demand for new planes from Boeing (BA). While Boeing is in a very weak position and may struggle to keep its equity value from declining further, the company’s suppliers are generally being hit the hardest. Notably, Spirit AeroSystems (SPR), which is down about 75% this year.

Fortunately, SPR had about $2 billion in cash at the end of last quarter and a bit more than that in working capital. The company also recently priced a $500 million debt offering at 5.5%, which is to be used for general corporate purposes. This gives it very strong liquidity in a difficult situation. SPR has relatively high financial debt, but it did receive covenant relief until 2022. That said, it is unclear if the airline industry will rebound soon. If so, the company may drive itself into a deep financial hole that will harm its equity value.

In reality, SPR has little control over its sales. Its sales are largely dependent on Boeing’s aircraft sales, which depend on airline ticket sales. So far, airlines have lost a staggering $77 billion during the first half of 2020, and the IATA does not expect to see a recovery until 2024.

Data from the airline reporting corporation ArcCorp shows that total domestic and international sales they’ve processed remain down over 90% this year despite the time that has passed since lockdowns began: 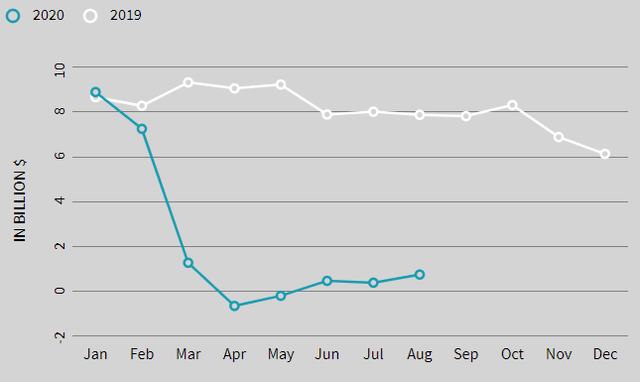 Sales tend to decline during later months, so they are unlikely we see a recovery for some time. It remains very unclear how long it will take air travel to rebound. Early on, many claimed there would be a rebound by summer. However, today, that date is being pushed back by years.

Most importantly, many businesses have normalized communicating through video. Surveys suggest that many large corporations do not believe they will ever see the same levels of air travel expenditures as had did pre-COVID-19. Business travelers account for at least 12% of airline revenue, but they’re twice as profitable as others.

The simple fact is that consumer and business interest in air travel is very low, far lower than necessary for airlines to turn a profit. Even if there is an airline subsidy bill to protect them (which is looking increasingly unlikely for the time being), the money will only be used to slow the intense bleeding. It is unlikely to be enough to cause them to lift CapEx to the point where Spirit AeroSystems’ revenue returns to normal.

Put simply, it seems unlikely that SPR will see a full recovery for years. This is also assumed by analysts who, on average, do not expect the company to see a revenue recovery until 2024:

Can Spirit AeroSystems Take The Hit?

Current analyst expectations assume SPR’s income will be negative until Q2 2022. I concur with this sentiment, as it aligns with the outlook for air travel as a whole. The total expected forward loss from COVID-19 is currently $3.2 per share ($336 million), which is on top of $3.07 in losses that have already occurred. Given SPR’s working capital over $2 billion, it has the liquidity to afford such losses, even if they are higher than analysts currently expect.

If we take this as a base-case outcome, Spirit AeroSystems may be an attractive company. It usually generates $350-750 million in annual profits and is only valued at $2.11 billion. Sure, the company will lose about two years’ worth of earnings, but it is borrowing at relatively low rates given its situation, so the cost of the added debt is quite low. If Spirit AeroSystems’ earnings return to the normal range, it would have a long-term forward P/E of only 3.5X-7X, which is extremely low.

Of course, this is predicated on its lenders being forbearing. In June, the company was at risk of breaching covenants, but had a relief amendment that meant its total leverage ratio would not be tested until Q1 2021 so long as it kept revolver borrowing limited (see 10-Q pg. 27). Quite frankly, it does not seem entirely likely that SPR’s 2021 EBITDA will be great (if even positive), which means it is still at risk of an eventual covenant breach.

Still, the company is making efforts to reduce costs. Its revenue is largely dependent on whether or not the demand for Boeing’s 737 MAX is restored and if there is an airline bailout package. Even if these do not occur, Spirit AeroSystems is likely to recover in full eventually, so creditors will likely remain relatively lenient.

If we assume Spirit AeroSystems’ lenders will continue to work with the company and demand for air travel eventually returns, the stock is likely undervalued by at least 50% based on forward valuation. Indeed, it could be an attractive deep value opportunity.

Still, there is extreme uncertainty today. The company, Boeing, and airlines are all making very significant changes which could change SPR’s outcome. There is also uncertainty regarding whether or not the U.S government will directly support airlines. This will likely continue until year-end, and until clarity is evident, SPR is likely to remain at a suppressed level.

Put simply, SPR has favorable upside potential, but it might be best to wait and see before buying. If the stock gains positive momentum and news volume relating to the airline industry declines, I may jump aboard.

If you’re looking for (much) more research, I run the Conviction Dossier here on Seeking Alpha. The marketplace service provides an array of in-depth portfolios as well as weekly commodity and economic research reports. Additionally, we provide actionable investment and trade ideas designed to give you an edge on the crowd.

As an added benefit, we’re allowing each new member one exclusive pick where they can have us provide in-depth research on any company or ETF they’d like. You can learn about what we can do for you here.

Disclosure: I/we have no positions in any stocks mentioned, but may initiate a long position in SPR over the next 72 hours. I wrote this article myself, and it expresses my own opinions. I am not receiving compensation for it (other than from Seeking Alpha). I have no business relationship with any company whose stock is mentioned in this article.

Additional disclosure: Would buy SPR on a breakout.

2/2 © Reuters. The logo for ConocoPhillips is displayed on a screen on the floor at the NYSE in New York 2/2 By Arunima Kumar (Reuters) – ConocoPhillips (N:) on Monday agreed to buy U.S. […]