The 1stUS presidential debate didn’t bring much of surprises to investors in terms of candidates’ economic and foreign policy prescriptions. Post-debate polls suggest that Joe Biden continued to lead, with Trump’s approval rate falling. Looking ahead, market focus might shift back to the fundamental elements until the 2nd presidential debate takes place on 15th October.

A better-than-expected US ADP jobs report, alongside reignited US fiscal stimulus hopes boosted market confidence. The September ADP job reading came in at 749k, higher than a 650k forecast (see chart below). The August figure was revised up to 481k from previous reading of 428k, pointing to a gradual recovery of the private employment market. This Friday’s non-farm payrolls report is of high importance too. Economists’ sees some 850k non-farm jobs created in September, a revision down from the previous month’s reading of 1.37 million. 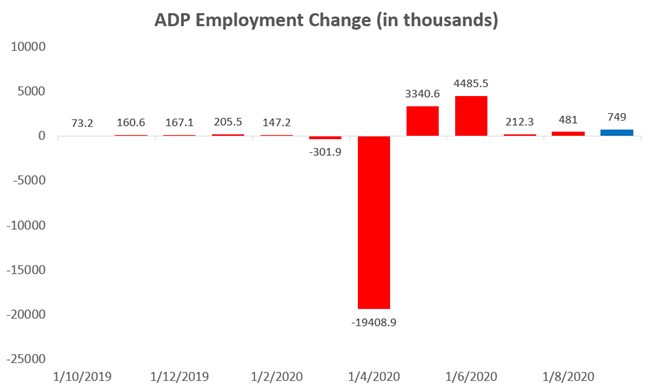 Asia-Pacific markets may follow the US leads higher, as the futures market suggests. The Tokyo Stock Exchange said that it would suspend trading in all stocks, due to a glitch in its system to distribute market information.

Traders face a fairly packed calendar today, with South Korea’s balance of trade, a string of EU and US Markit manufacturing PMIs, and US inflation among top market events. Read more on our economic calendar website. 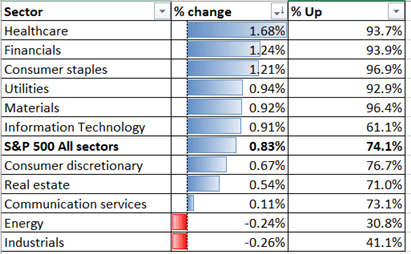 Technically,the S&P 500 index has likely broken above its 20-Day Simple Moving Average (SMA) line, penetrating into the upper Bollinger Band for the first time since it entered into a consolidation in early September (chart below). This may suggest a potential trend reversal should the index stay within the upper Bollinger Band in the next few days. an immediate resistance level can be found at 3,380 – the 50-Day SMA line. The MACD indicator has likely formed a bullish crossover, pointing to more upside potential.