The Australian Dollar surged higher against its major counterparts as the Reserve Bank of Australia “decided to maintain the current policy settings, including the targets for the cash rate, the yield on 3-year Australian Government bonds, and the parameters for the expanded Term Funding Facility”.

With the RBA retaining its wait-and-see approach to monetary policy in the near-term, the risk-sensitive local currency could continue its outperformance given that “the Australian Dollar remains just a little below its peak of the past couple of years”.

Moreover, the central bank believes its current “policy package is working as expected and is underpinning very low borrowing costs and the supply of credit to households and businesses”.

However, with the RBA remaining “committed to do what it can to support jobs, incomes and business” and reiterating that “it will maintain highly accommodative policy settings as long as is required”, there is a distinct possibility that further easing could be on the table by the end of the year.

Nevertheless, the absence of additional monetary policy and the lack of concern regarding the exchange rate’s current levels may buoy the Australian Dollar and potentially spark a resumption of the uptrend extending from the March doldrums.

Attention now shifts to the Australian Government’s Federal Budget announcement later today, with Treasurer Josh Frydenberg expected to announce a record deficit and a staggering amount of fiscal support in an attempt to drag the nation out of its first recession in 29 years.

Frydenberg has committed to substantial government support until the unemployment rate is “comfortably under 6%”, adding that “obviously the deficit will be fairly significant, and the debt burden will increase, but this is the price of protecting lives and livelihoods”.

Prime Minister Scott Morrison’s government is expected to bring forward tax cuts penned for 2022 and has already announced $7.5 billion in transport infrastructure spending, stating that “we have been working closely with the state and territory governments to invest in the infrastructure that is ready to go and can help rebuild our economy and create more jobs”.

That being said, it remains to be seen if a stimulatory budget can counterbalance the lack of additional monetary support in the short-term and cap AUD’s push higher.

Nevertheless, substantial fiscal support may shore up regional risk-sentiment in the interim and potentially buoy the ASX 200 index.

With the 14-day average of daily coronavirus infections in Victoria falling to 10.6, Australia’s second largest city – Melbourne – could be on the verge of moving to the next stage of Premier Dan Andrews “reopening roadmap” ahead of schedule on October 19, if the state-wide average drops below 5 “and there are fewer than 5 cases from unknown sources in the past 14 days”.

However, recent comments from Chief Health Office Brett Sutton suggest that an early transition may not be a given, stating that “its not a certainty one way or the other [and] we’d have to see exactly where we were at that time, including the trend”.

Moreover, with a further 15 cases recorded in the state today and the virus growth rate climbing back towards 1, there is a distinct possibility that Melbourne will fail to meet the targets needed to ease Covid-19 restrictions.

Therefore, the near-term outlook for the Australian Dollar and benchmark ASX 200 index could be defined by local health outcomes, with Victoria failing to ease restrictions further on October 19 probably hampering the performance of regional risk assets. 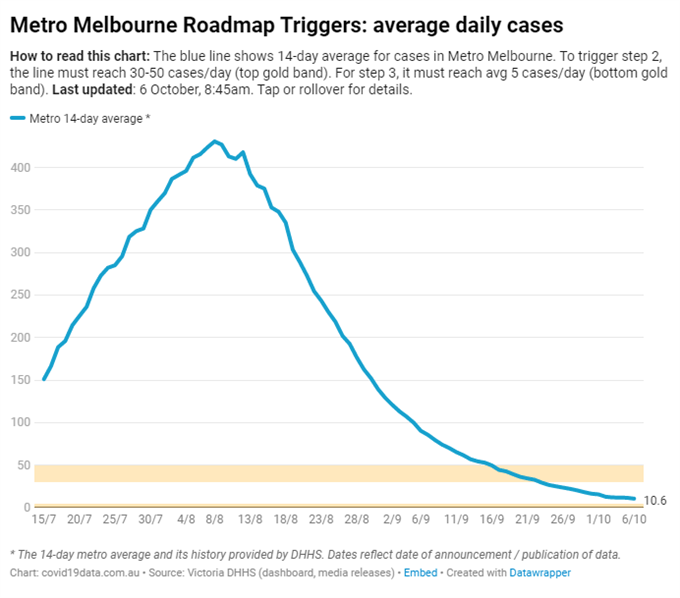 From a technical perspective, AUD/USD rates could be poised to resume their uptrend extending from the March doldrums, if price remains constructively perched above support at the 61.8% Fibonacci (0.7131) and trend-defining 50-day moving average (0.7159).

The RSI’s climb back above its neutral midpoint and a bullish crossover on the MACD indicator hint at swelling bullish momentum, which could ultimately ignite a surge to retest the September high (0.7414) if buyers can breach resistance at the 2019 high (0.7295).

Conversely, a daily close back below the 61.8% Fibonacci (0.7131) could ignite a more sustained pullback from the yearly high and carve a path for price to test support at the sentiment-defining 200-DMA (0.6924).

© Reuters. Denmark stocks lower at close of trade; OMX Copenhagen 20 down 0.85% Investing.com – Denmark stocks were lower after the close on Thursday, as losses in the , and sectors led shares lower. […]