Citigroup is the standout buy

In this article I look at the five-year fundamental track records of the big four banks: JPMorgan (JPM), Bank of America (BAC), Citigroup (NYSE:C) and Wells Fargo (WFC). There is a big valuation gap between these stocks that seems unjustified, and C emerges as the most attractive.

Banks are in a tough spot. But there is value.

The bank sector is down and going sideways, broadly for two reasons that are the product of the Covid-19 crisis: low rates, and high credit risk.

This means bank stocks will be sensitive to signs of hope in the third quarter data. The two sources of potential good news are market driven fee and trading revenues and credit costs, which should fall versus the level of the second quarter, when high provisions were taken in anticipation of losses down the road.

It’s unlikely there will be a lot to celebrate on interest margins, given the prevalence of very low rates over the quarter. In terms of bank specific matters, the market is likely to play close attention to cost and governance guidance from WFC and to discussion of the Fed reprimand for C concerning its risk systems, which have not been updated quickly enough in recent months.

For all the ins and outs of quarterly expectations, JPMorgan’s US bank analysts admit the big picture dominates the medium term (author emphasis).

We expect bank stocks to outperform near term given valuations and earnings expectations – we favor banks with likely stronger rise in fee revenues, such as Truist. Money center banks have recently lagged due to concerns about greater pressure on net interest income – strong markets-related revenues should offset some, such as at Citi. Medium term, bank stocks will be led by the pace of economic recovery and success of a vaccine (as quoted on Seeking Alpha).

These top-down factors apply to all banks. Can we add anything to the medium term opposite stock specific opportunity? The most basic and important ratio for bank stocks, the trusty PE, gives a steer over where to focus. This table uses Nasdaq consensus survey data and market pricing (google).

The EPS estimates behind the above PE ratios are based on a partial recovery of EPS in 2021 and a full, if unspectacular, recovery in 2022.

OK, so we know that if that plays out (and it isn’t unreasonable) then the risk premium demanded by the market for owning bank shares will come down as well and the stocks should command higher multiples. 12-14x current year earnings before the pandemic was normal for large banks, so investors could be looking at very attractive upside over the medium term if valuations return to those levels.

Remember, under normal economic conditions, these banks try to pay out all of their earnings to shareholders via dividends and buybacks. So the inverse of those PEs represents your shareholder pay-out rate.

Within our sample, C and WFC both seem markedly cheap on 2022 PE vs. BAC and JPM.

You get the same impression if you look at a historical valuation, too. Price/Pre Provision Profit (Operating revenues less costs) for 2019 is nearly 6x for BAC and JPM, 3.7x for WFC and 2.82x for C. The virtue of looking at P/PPP is that it smooths fluctuations due to loan loss provision charges, and can be a clue to value in periods of crisis (to calculate this quickly, take current market cap and divide by operating revenue less non interest expenses for 2019).

The math is simple: If WFC and C can catch up with their peers in the multiple they trade on, and then rerate alongside them, then WFC and C will be the stocks to own among the big four banks.

I’ve written about what each needs to do to improve their prospects in terms of remedying the various challenges they face.

There’s no question that WFC needs to up its game in two areas: costs, given the decline in its efficiency ratio in recent years, and governance, with the Fed needing to see progress opposite customer governance processes in order to lift the asset cap that was imposed on WFC for these shortfalls in 2018.

C faces somewhat lesser challenges, with the impending reprimand by the Fed over its risk system updates the major external pressure on management.

Is the discount justified?

So, there’s some work to be done in the two cheaper banks, at WFC considerably more so than Citi. Does it make sense for them to be so much cheaper than their peers?

Valuation discounts of this magnitude ought to reflect something in the track record. Let’s take a look, starting with revenue performance. The data for the line charts in this article all comes from 10-Q and the financial accounts sections of the annual reports for the years mentioned.

Let’s start with net interest income. This chart indexes the level achieved in 2014 and applies the growth each bank saw on a rolling basis.

As you can see, JPM and BAC are out in front. C and WFC have gone very slightly backwards (1% over the five years in the chart) while JPM and BAC have posted decent growth, especially considering they are massive, mature businesses.

Remember that in the case of C, the bank was restructuring post-2008 until last year, so some of the lacklustre performance in net interest income growth is from shedding businesses. A related factor in this is management focus on restructuring rather than growth. 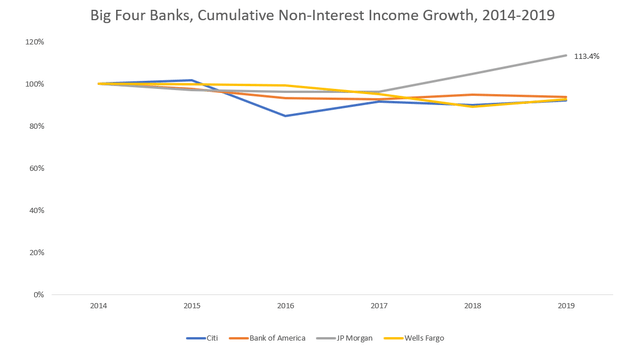 This is a different story to net interest income. BAC has done no better than C and WFC through the last five years. C has shown some higher volatility, which reflects its trading business. But overall, there is nothing inferior about WFC and C in relation to BAC in delivery (or lack thereof) in non-interest income.

JPM, broke from the pack with decent growth over 2018-19. Of course, it has also been very strong in 2020, though that owed a lot to temporary volatility due to the COVID-19 disruption in the second quarter.

The next chart shows non-interest expenses. 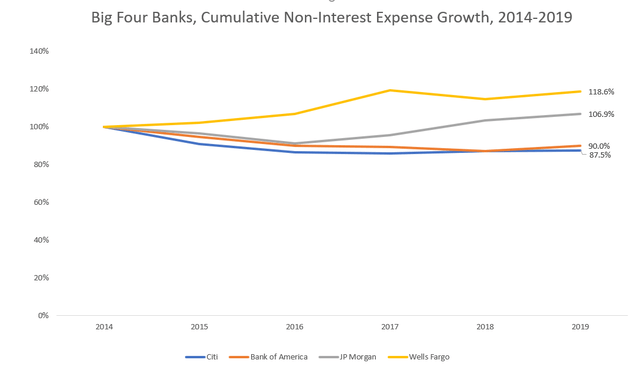 A different story again. In expense management, C and BAC are the stars, with meaty reductions over the five year period in the chart. JPM is no slouch – 7% growth over five years is a strong performance, containing cost growth below CPI inflation. WFC has suffered. Remember, its revenue trends were mildly negative.

Of course, we know the story at WFC. Legal expenses related to its 2016 accounts scandal, and the subsequent need to transform its management practices has coincided with reengineering expenses (the move to digital, system rationalisation), so some of the cost inflation you see in the chart will ebb on its own. But WFC investors have seen the operating margin fall markedly before the ravages of the COVID-19 economy struck in 2020.

By now, you should be noticing that WFC has looked comparatively weak in 2/3 areas we’ve looked at, while C has looked alright in 2/3.

Let’s tie these charts together by comparing expense ratios (the ratio of non- interest expenses over all operating revenue). 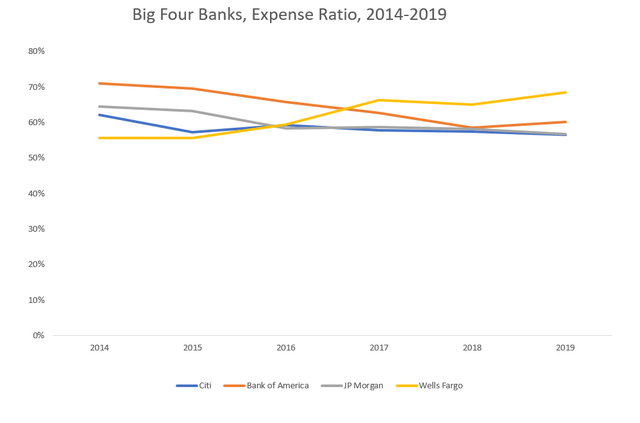 So the fortunes of BAC and JPM, which show strong improvement in their efficiency ratio, contrast with the strong deterioration at WFC. Just as some of the BAC improvement involves 2008 legacy and legal expenses reducing, but also a strong business performance, so WFC reflects rising one-off costs, but also a poor business showing.

But look at C.

It had the second lowest expense ratio in 2014, and held joint lowest (and therefore best) with JPM as recently as last year.

Here’s the result of these operating trends:

What’s in the price?

Let’s go back to our original question about whether the different performance of these banks justifies the current valuation disparities. What else might weigh in?

Consensus EPS forecasts reflect the differing fortunes of these banks in the current pandemic economy.

What we see above is that WFC has had by far the worst Covid-19 experience of the big four, a fact that Seeking Alpha readers are well aware of.

What may be less well known is that C has an even bigger boost from trading than JPM in 1H’20 and compares very well to its two premium peers in overall pre-tax profit. Yes, these numbers are all down, but this is a once in a hundred years recession. And C has stood up, so far, very well when measured against BAC and JPM.

While WFC has had an unrelentingly miserable three years that have become worse during 2020, Citi has really only posted lower growth than its premium peers over time, and, so far at least, has held up just as resiliently in the difficult 2020 economy.

Go back to that efficiency ratio chart. JPM and BAC have been posting strong operating profit growth partly because their efficiency has been moving toward the kind of level enjoyed by C, while WFC has lost pole position and fallen to last place.

I think WFC can reverse its deterioration in operating leverage, but C is ‘already there’ in terms of its operating profit margins.

The question is, now JPM and BAC have gained better operating margins, will their growth slow down and Citi look better on a relative basis?

If we look at asset growth over the last five years, WFC has done quite well, along with BAC, while JPM and C (with bigger wholesale banking activities) lagged to some extent. 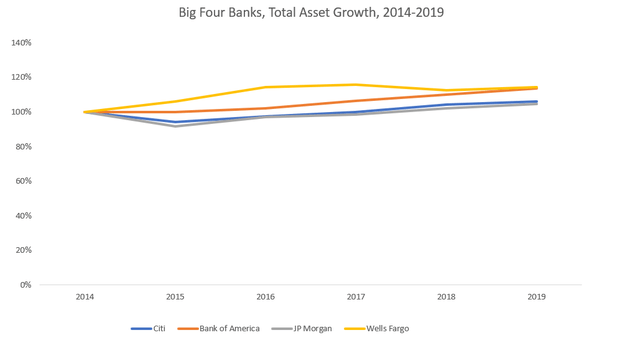 While WFC has been under the asset cap since 2018, C has, in fact, kept pace with BAC and JPM since 2016. Its lower growth over five years reflects disposals and management focus, and it has emerged from that recently. 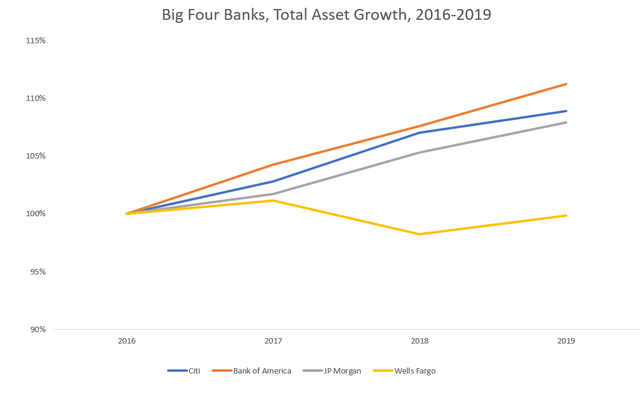 If you’re finding the charts a little much, hold your breath, just one more to go.

Citi has experienced slight pressure on its net interest margin since 2014. Again, this is disposals weighing in after its exit of consumer finance businesses. 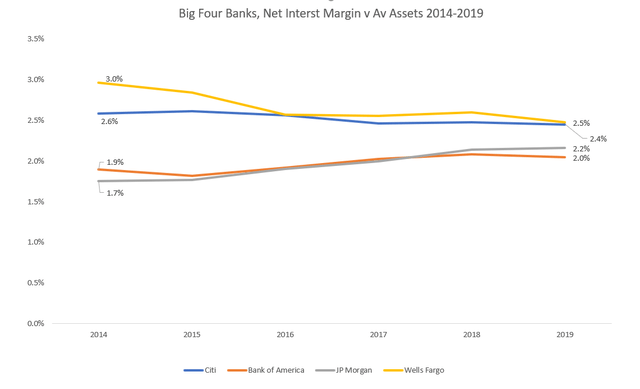 JPM, by growing customer loans within its asset mix from 28% to 35% over this period (2014 and 2019 Annual Report data), has added to what you would expect from a rising rate environment through 2016-18, which is what has benefited BAC in this period.

If you look closely at the chart, you can see that JPM and BAC made most of their progress in interest margin over 2016-17 and since then, C has compared more favourably, while WFC has continued to feel the pressure.

Putting it all together

Bank stocks price off earnings, and the market is most interested in through- the-cycle earnings with normalised provisions, which is why bank stocks can sometimes recover rapidly while provision charges remain elevated in a recession.

There’s no question that WFC is in its own special earnings hell.

C, in contrast, is interestingly poised.

It makes no sense to me for C to be trading cheaper than WFC on 2022 consensus EPS.

If a lack of recent growth is C’s main failing vs BAC and JPM, the management will have a clear slate, come the CEO transition due in February next year, to improve growth from here. An economy recovering from recession should provide a good backdrop.

C is a clear value opportunity on this basis. It ticks most of the same boxes as JPM and BAC, and just needs better relative growth. WFC is also attractive, though it faces a bigger turnaround task than C.

I am opening positions in C and WFC in the next few days.

Disclosure: I/we have no positions in any stocks mentioned, but may initiate a long position in WFC over the next 72 hours. I wrote this article myself, and it expresses my own opinions. I am not receiving compensation for it (other than from Seeking Alpha). I have no business relationship with any company whose stock is mentioned in this article.