The USD/ZAR has traded lower since the Tuesday swing high despite President Trump seemingly reluctant to discuss a new stimulus package. Since then, more positive news has emerged as the administration is keen on agreeing a comprehensive stimulus package.

The daily USD/ZAR chart below highlights the long term downtrend where, more recently, price action has been trading within the broader 17.7500 – 16.0000 range. Such choppy price action may be expected to persist unless price makes a significant move outside of this range followed by continued momentum.

Making use of an analytical technique called multiple time frame analysis, we can zoom into the 4 hour price chart to analyze faster price movements, potential trends or price patterns that may be developing under the surface.

The 4-hour chart highlights what appears to be a bearish flag pattern. This pattern starts with price action moving sharply lower, followed by a temporary higher prices that form a flag before price continues to break below the flag and continue trading lower. 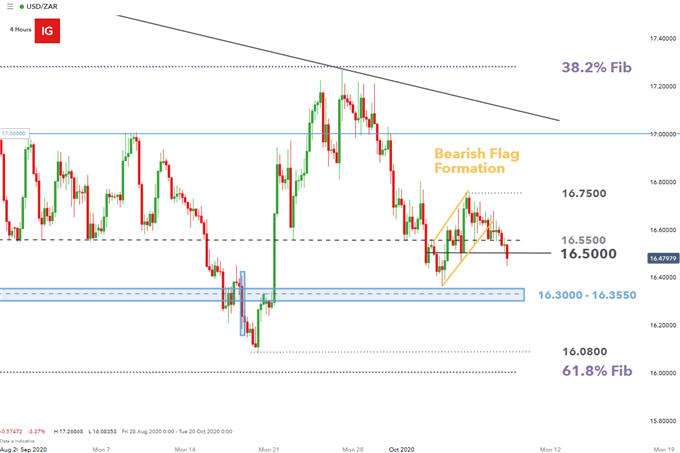 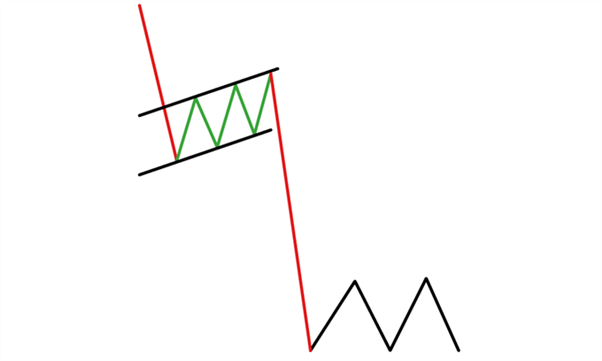 Price has broken below the 16.5000 psych level which opens up the possibility for continued ZAR strength. Furthermore, should the bear flag play out, the first level of support comes in at the zone of support (16.3000 – 16.3550) highlighted in blue, followed by the previous low of 16.0800. Further momentum may then bring into play the 61.8% Fib (drawn form the Jan low to the April high).

However, should market sentiment sour, resulting in capital flight away from EM currencies, there may be a continuation of the choppy price action seen in previous months. A close above the 16.5000 level may spur a move towards the Tuesday high and possibly even the 17.0000 psych level before the 38.2% Fib level becomes resistance.

Discover shor-term scalping techniques for the week ahead

Local and Global Developments at Play

Going into the election the US Dollar is the most short as it’s been in over a decade just one month away from the election. Historical data hints at a reversion to a more neutral stance in USD as the time horizon shortens, which could result in a USD short squeeze (detrimental for the ZAR).

There has been a recent swing in sentiment regarding the proposed stimulus bill even though President Trump advised his negotiation team to walk away from talks until after the elections. Treasury Secretary Steven Mnuchin communicated that Trump is seeking agreement on a comprehensive stimulus package in a call with Nancy Pelosi, Speaker of the House of Representatives.

South Africa has the highest number of COVID-19 cases in Africa. Although numbers have plateaued, the fact remains that the country could see future lockdown measures akin to Europe. However, as vaccine expectations rise, the Rand may be in for further strength should a vaccine be produced sooner rather than later, sparking risk-on flows.

Finance Minister Tito Mboweni is scheduled to deliver the mid-term budget speech later this month. He will have his work cut out for him as SA is currently dealing with increasing levels of public and private debt, struggling state owned enterprises (mainly, SAA and Eskom) and a slowing economy, all of which have all been exacerbated by the economic impact of the coronavirus.

Learn how to prepare and trade on news