If you’re into investing in the mining sector, you should know the above chart very well. This series covers the three projects with the most significant drill interceptions over the past week as well as the prospects of the companies which own these projects. I will use data from the weekly bulletin of opaxe, which can be found on its website. Note that the drill interceptions are converted into grades of gold equivalents using the following formula:

Where AuEq (g/t) is the gold-equivalent grade, z is the number of listed components (e.g. Au, Ag, Pb, Cu, Zn, Li2O, Sn, Co, etc.), ρn and Vn are the mass concentration and market value of the nth component in the list, respectively, and V Au is the market value of gold.

Gold has been chosen as the metal equivalent for all conversions as it is the most widely-used and best-understood benchmark to determine or appreciate the grade tenor of a drilling intercept. – opaxe

1) Arturo South gold mine in the USA

On September 21, Premier Gold (OTCPK:PIRGF) released a batch of drill results from its expansion drilling campaign at the El Nino underground mine which forms part of its 40%-owned South Arturo property. The best interception was 39.6m @ 17.11g/t Au from 80.8m in hole SER20019, which is equal to 678(AuEq.)m. 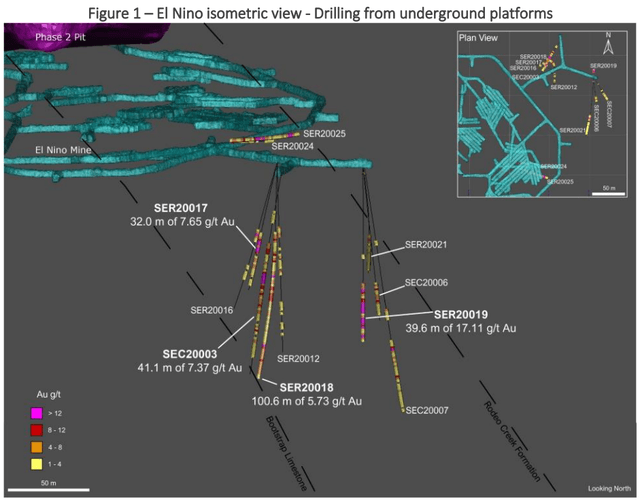 El Nino is located in the northern part of the famous Carlin Trend and the remaining 60% of South Arturo are owned by Nevada Gold Mines. The latter is a joint venture between gold majors Barrick (NYSE:GOLD) and Newmont (NYSE:NEM). 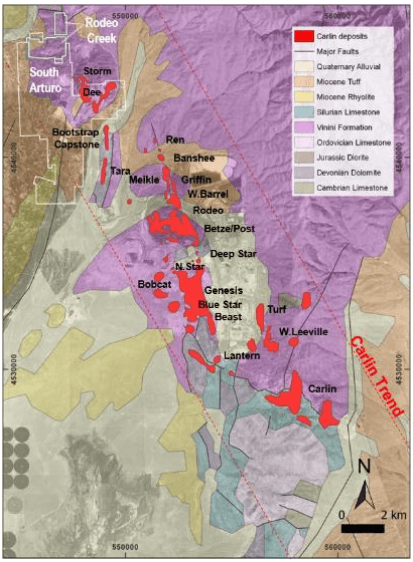 The El Nino underground mine reached commercial production in October 2019, and it produced 4,765 ounces of gold at all-in sustaining costs per ounce of $1,026 in the second quarter of 2020. 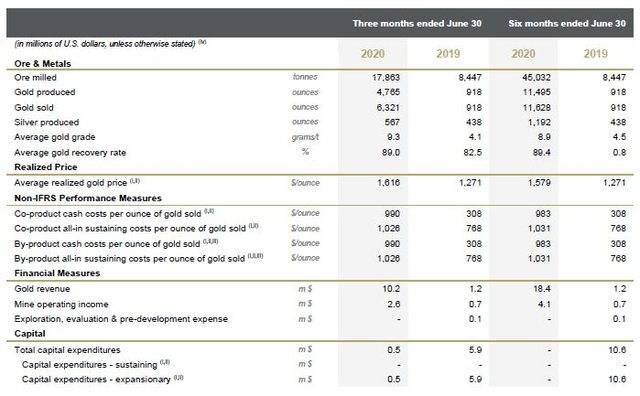 The attributable reserves to Premier from the project stand at 347koz of gold, although these should increase significantly following the completion of the 2020 drilling program. 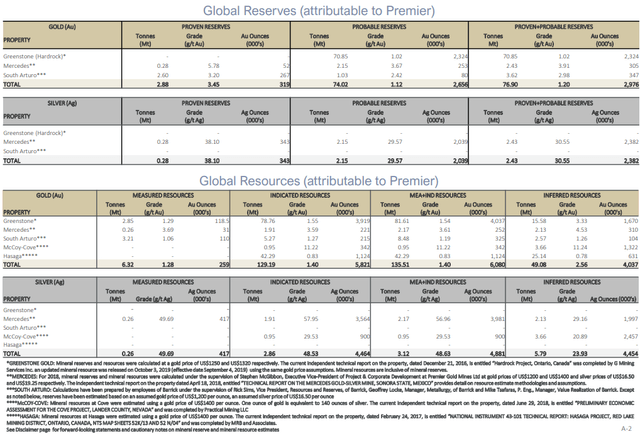 Arturo could soon be listed in a separate company as Premier announced in August that it’s mulling a spinout of its Nevada projects. The new company would also include the McCoy-Cove property.

2) DeLamar gold-silver project in the USA 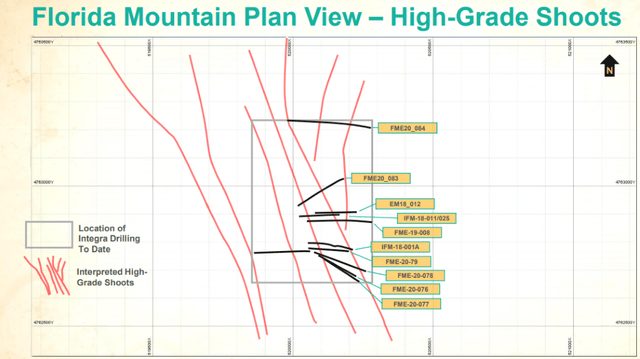 DeLamar is located near Boise in southwest Idaho and includes a historic mine with the same name. The latter produced 1.6 million ounces of gold and 100 million ounces of silver before it was closed in 1998 due to low prices for precious metals. 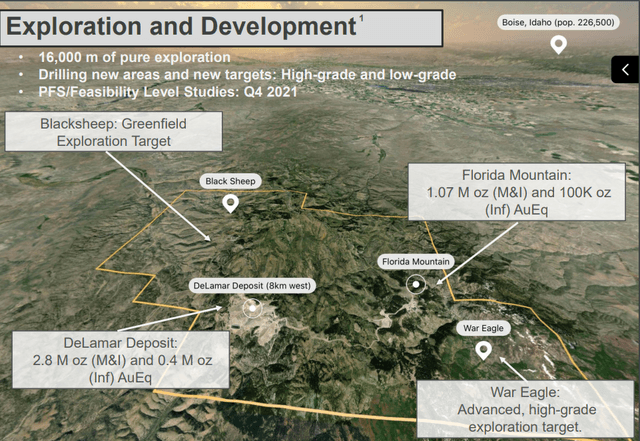 Integra has completed a preliminary economic assessment (PEA) on the project which showed pretty good key economics. At $1,350 per ounce of gold and $16.90 per ounce of silver, DeLamar has a net present value of C$472 million ($358 million) and an internal rate of return of 43%. The initial capex is estimated at $161 million, which I think is small for a gold project of this size. All-in sustaining costs (AISCs) also look good. 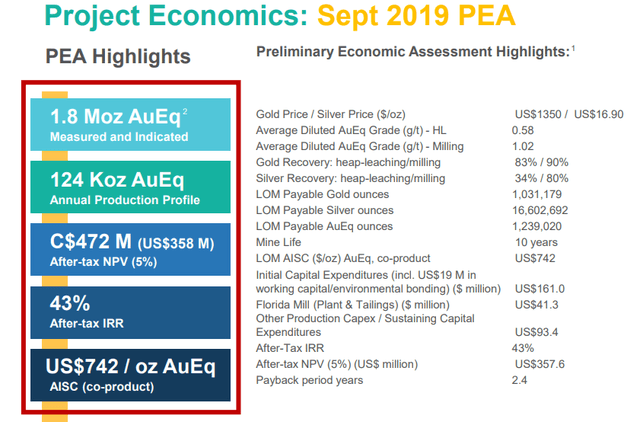 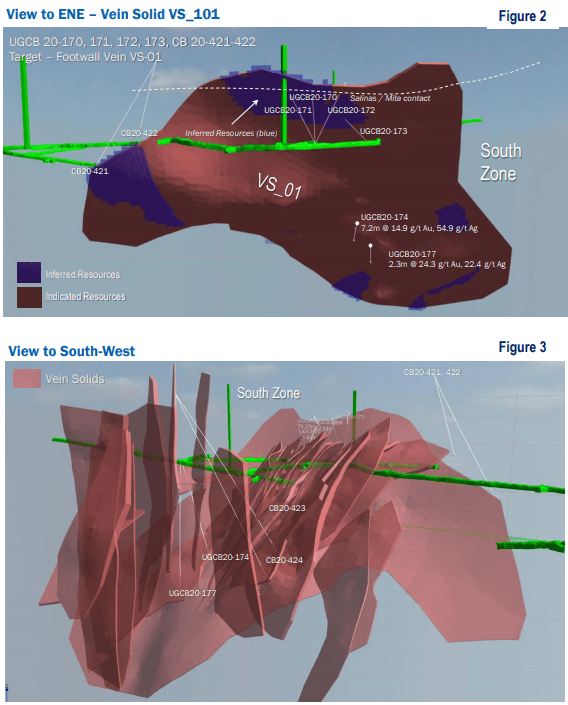 Cerro Blanco is situated in southeastern Guatemala and was acquired in 2017. So far, some $230 million has been spent on the project and underground development is around the 3km mark. 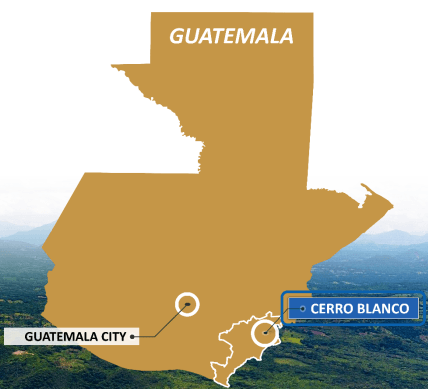 In January 2019, Bluestone delivered a feasibility study on Cerro Blanco, which showed very strong economics. The net present value is $454 million at $1,600 per ounce of gold and the internal rate of return stands at 55%. The initial capex is estimated at $196 million. 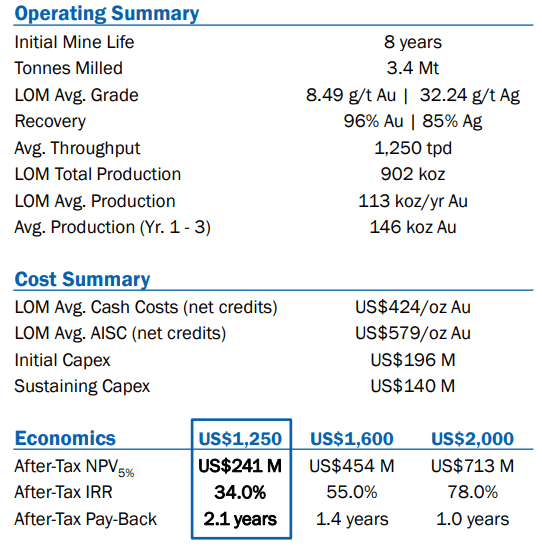 Cerro Blanco currently has 1.41 million ounces of gold resources averaging 10.3 g/t in the measured an indicated category and infill drilling started in November 2019.

Arturo South is a small gold mine in a great jurisdiction, which should have significantly better reserves and resources after the completion of the 2020 drilling program. I think most of Premier’s value comes from its Greenstone project in Ontario, and it could be better to wait for the company to spin out its Nevada assets if you want to get an exposure to Arturo.

Integra plans to restart an old gold mine, and I like this kind of projects as they typically require less capex and are less technically challenging compared to a new mine. Also, a lot of infrastructure and permits are already in place. The company is well-funded at the moment as it closed a $23 million bought deal financing in September. Overall, I think Integra looks undervalued in view of DeLamar’s potential.

Bluestone has an advanced-stage gold project that looks great even at $1,250 per ounce of gold. The key financial figures will improve further thanks to the ongoing infill drilling campaign. Like Integra, the company is well-funded with $58 million in the bank. Another thing I like about Bluestone is that it’s backed by the legendary Lundin family, which has significant experience in developing mines in difficult jurisdictions. The company looks cheap at the moment, but not as much as Integra.

Additional disclosure: I am not a financial adviser. All articles are my opinion – they are not suggestions to buy or sell any securities. Perform your own due diligence and consult a financial professional before trading.