“If you think your boss is stupid, remember: you wouldn’t have a job if he was any smarter.”― John Gottman

In our first in-depth analysis of October, we take a look at a promising CNS play. The shares are still off significantly from recent highs, but appeared to have bottomed and could potentially move substantially higher. A full investment analysis of our new holding follows in the paragraphs below.

BioXcel Therapeutics, Inc. (BTAI) is a New Haven, Connecticut based clinical-stage biopharmaceutical concern focused on leveraging artificial intelligence [AI] to develop therapies in neuroscience and immuno-oncology. The company has two assets in the clinic undergoing evaluation for seven indications. BioXcel was formed as a subsidiary of BioXcel Corporation (now LLC) in 2017 and went public in 2018, raising net proceeds of $54.1 million at $11 per share. With its successes in the clinic to date, the shares currently trade right at $48.00 a share and have an approximate $1.1 billion market cap. BioXcel’s parent still owns a ~34% economic and voting interest.

The parent also developed and still owns the AI platform (named EvolverAI) that is responsible for BioXcel’s candidates. EvolverAI evaluates millions of data points to find additional indications for already clinically validated product candidates where there is substantial unmet need and limited competition. There are over 27,000 active pharmaceutical agents, of which only ~4,000 are FDA-approved and marketed. BioXcel believes both the approved candidates and the failed ones that have been shelved for reasons other than toxicity and can be re‑engineered for different indications. They represent billions of dollars of research, upon which EvolverAI can piggy-back to generate more accurately targeted therapies. By concentrating on already developed compounds, BioXcel spends less time in the pre-clinic; thus, speeding its candidates’ time to market. Its development model isn’t dissimilar to Axsome Therapeutics (AXSM) and Karuna Therapeutics (KRTX), but they lack the big data analytics approach afforded by EvolverAI. 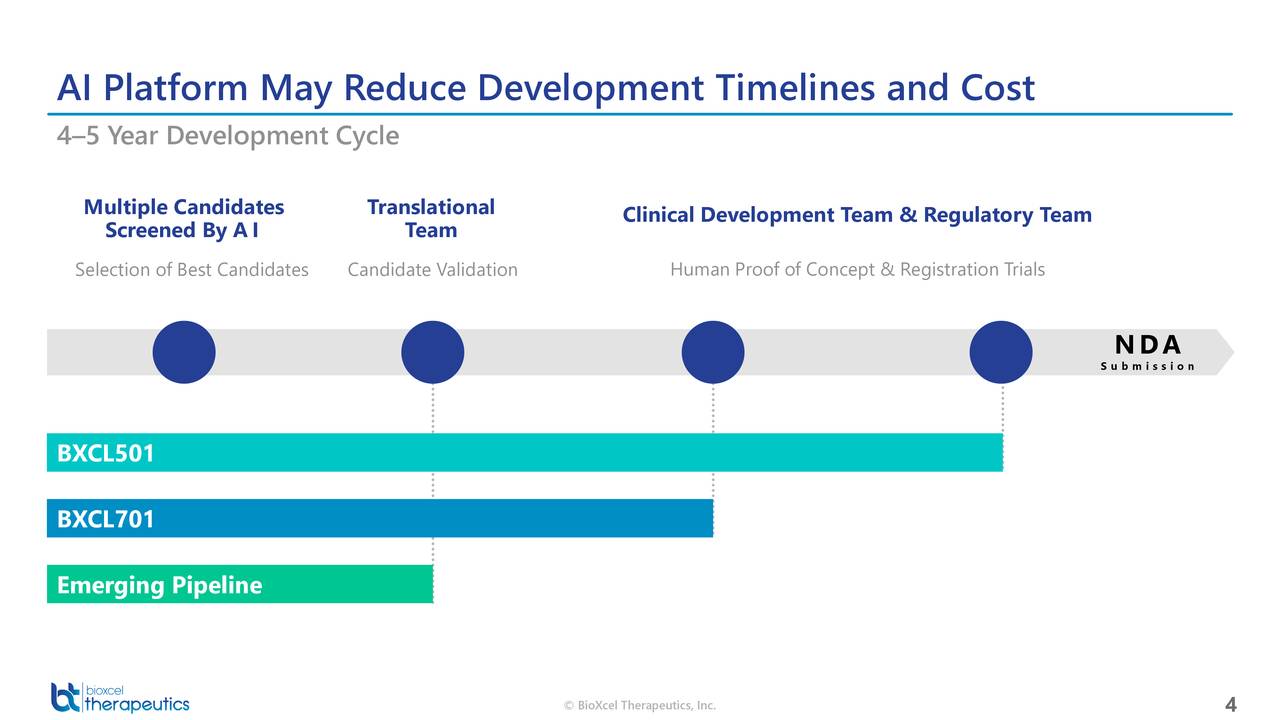 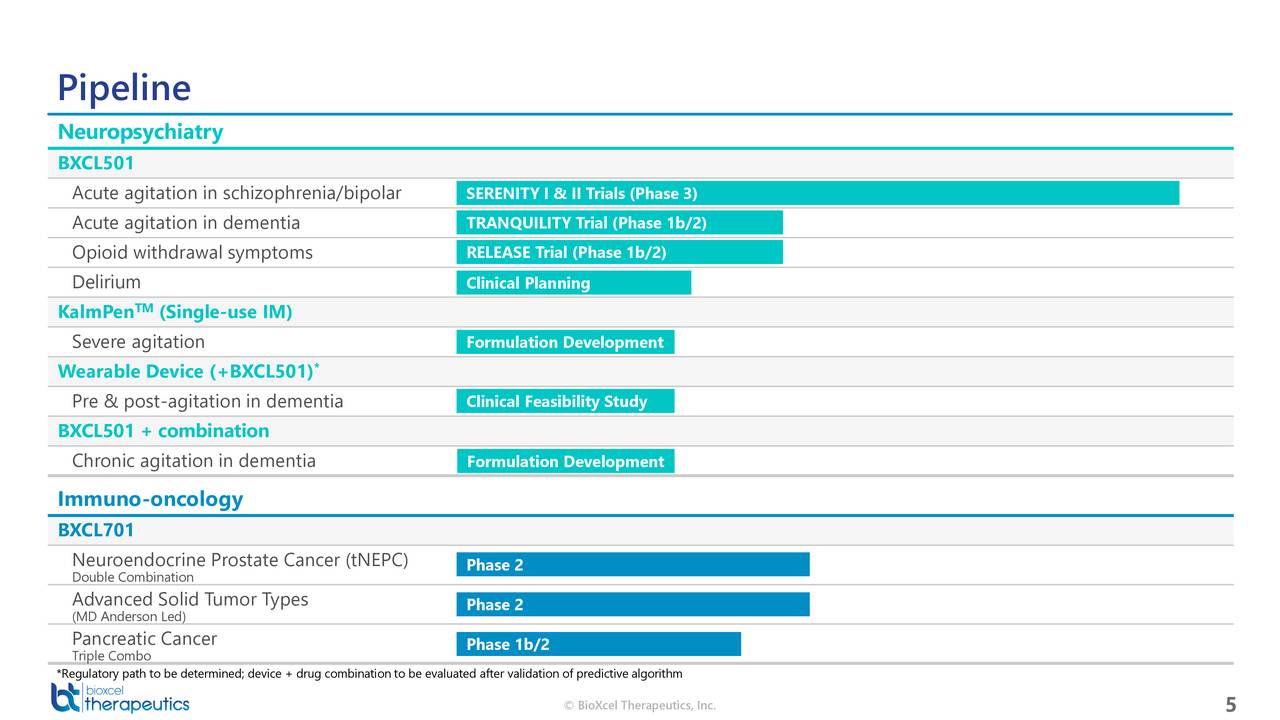 BXCL501. The company’s lead asset is clinical neuroscience candidate BXCL501, a sublingual thin film version of dexmedetomidine [DEX], a α2a adrenergic receptor agonist that prevents the release of norepinephrine. BioXcel has re-innovated Dex as BXCL501 for the acute treatment of agitation resulting from neurological and psychiatric disorders, including schizophrenia, bipolar disorder, dementia, delirium, and opioid withdrawal. Collectively, these disorders afflict over 150 million people globally, with agitation from these disorders affecting ~13.2 million Americans. Dex is the sedative anesthetic Precedex, which has been studied in over 130 clinical trials and prescribed as an IV administered sedative to initially intubated and mechanically ventilated patients during treatment in the ICU since 1999. BXCL501’s novel delivery and Dex’s prior prescription history allows BioXcel to take advantage of the FDA’s 505[B](2) regulatory pathway for speedier approval. 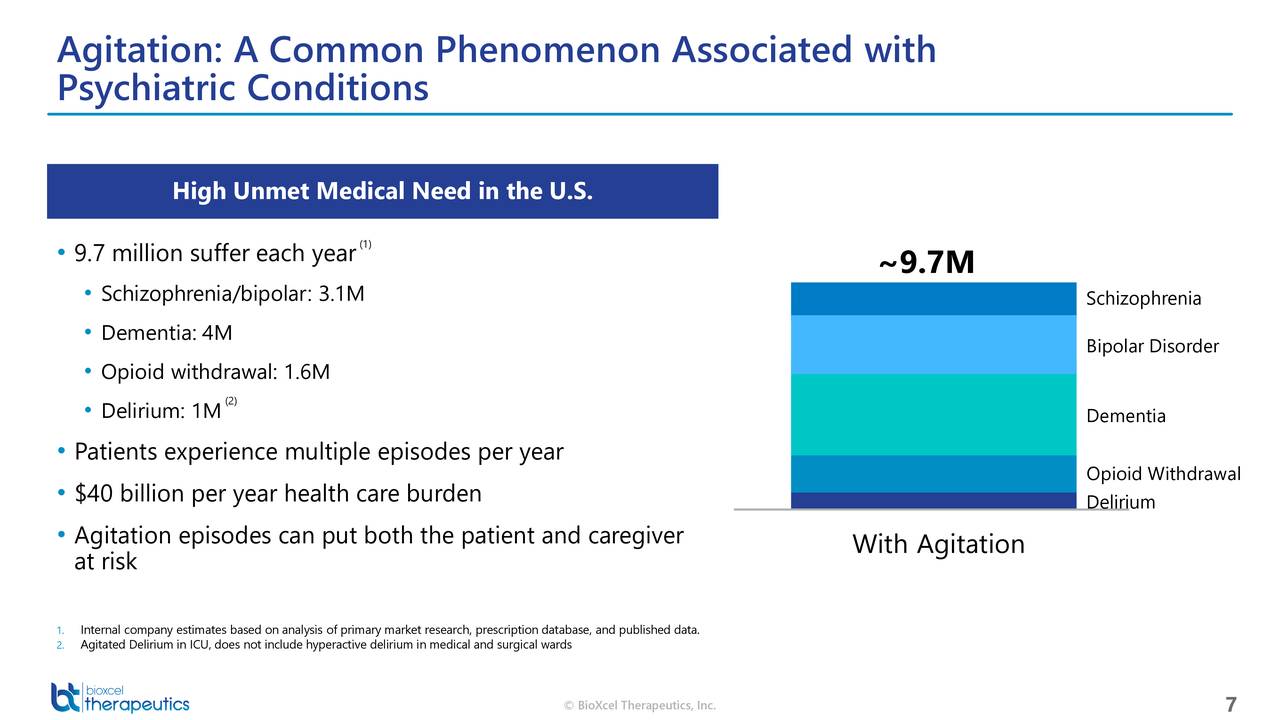 Current off-label remedies for agitation include antipsychotics and benzodiazepines – such as haloperidol and risperidone – which are plagued by safety, compliance, and side effect issues, such as black box warnings for use in the elderly, intramuscular administration – which in many instances requires physically restraining the patient – and excessive sedation. Thus, the opportunity for BioXcel and its non-invasive remedy that provides conscious sedation resembling natural sleep. 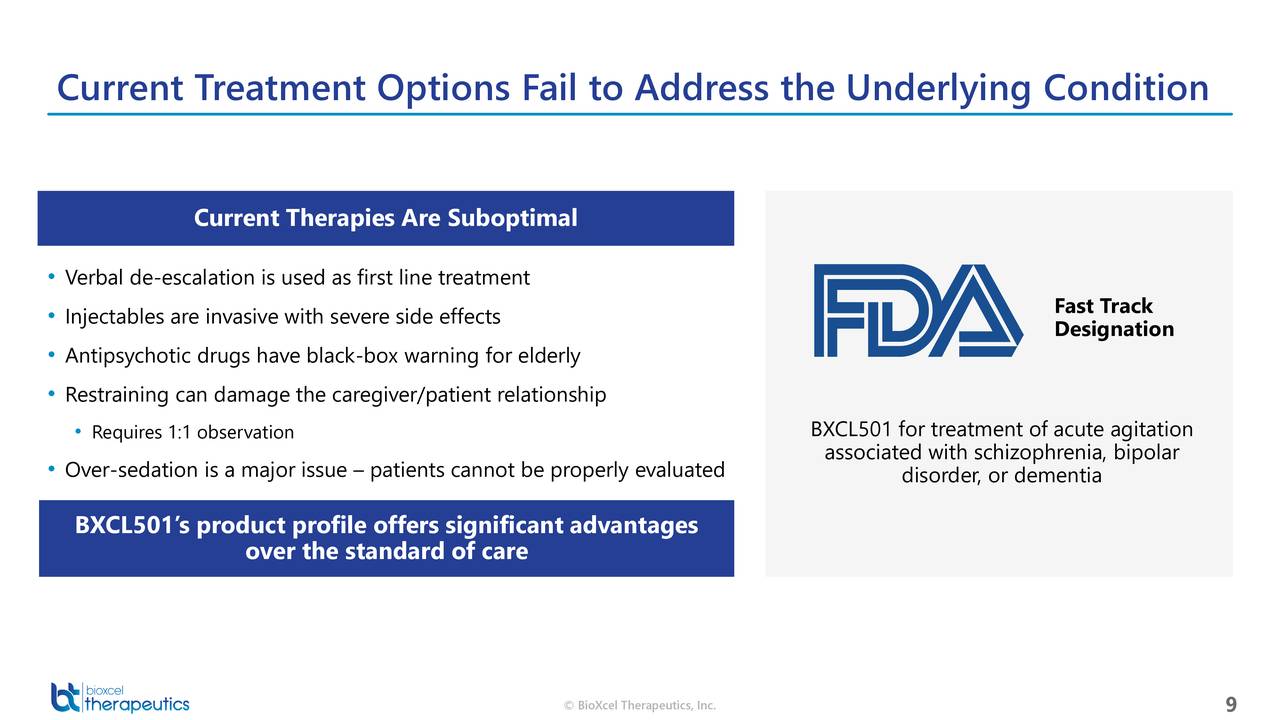 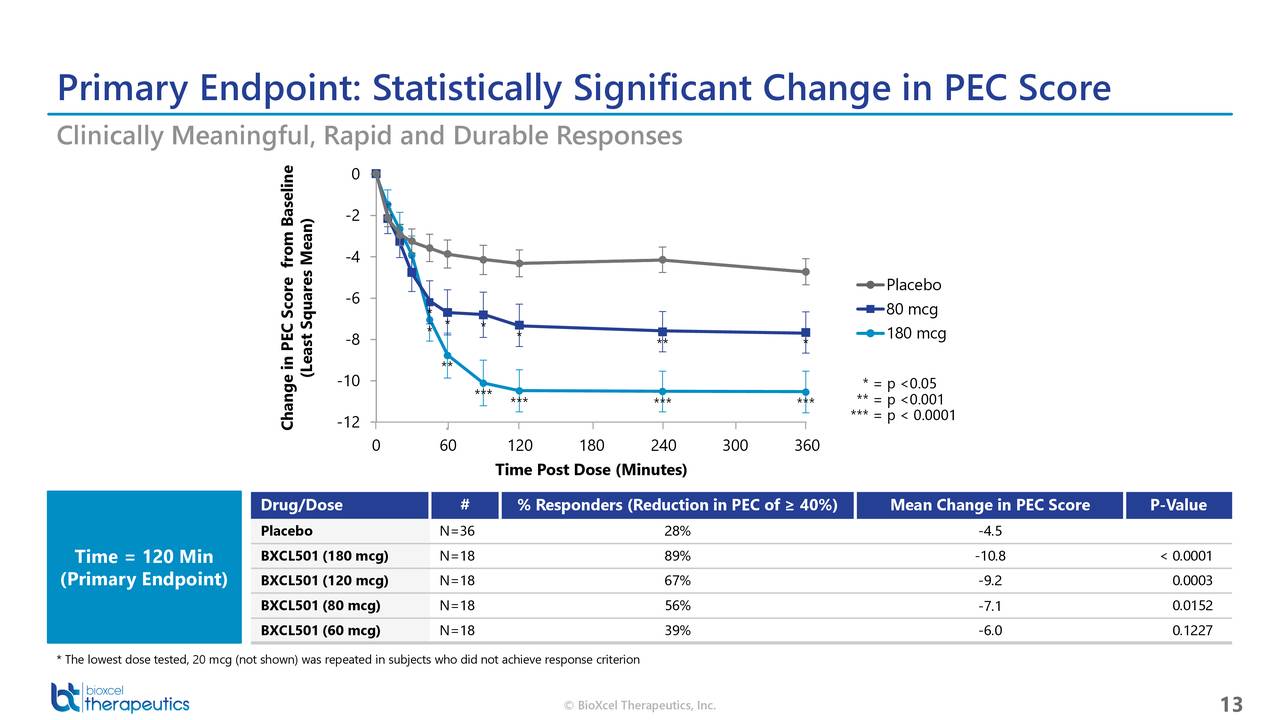 Dissemination of these highly promising outcomes on July 20, 2020 propelled the stock 24% higher (to $64.63 a share) in the subsequent three trading sessions. Armed with compelling data, a strong safety and tolerability profile, as well as a Fast Track designation from the FDA, BioXcel expects to have a pre-NDA meeting with the FDA in October 2020 followed by the submission of an NDA for the treatment of acute agitation in patients with schizophrenia and bipolar disorder – representing a ~3.1 million subpopulation of the 13.2 million total and a $1 billion market opportunity – in 1Q21. 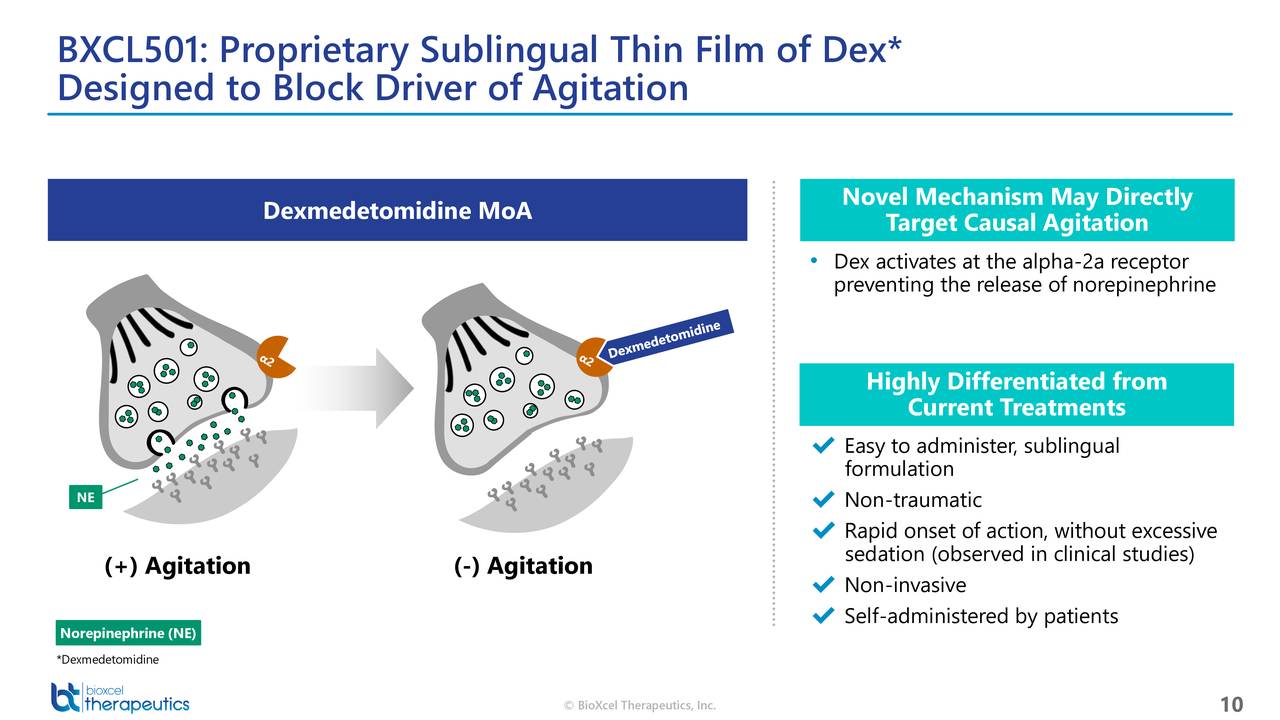 BioXcel also has two other Phase 1b/2 proof-of-concept studies ongoing for agitation in dementia (~4.0 million) and opioid withdrawal (~2.1 million) patients. The dementia trial (TRANQUILITY) is evaluating patients 65 and older at three dose cohorts. The third dose cohort (90 mcg) has been initiated and results are anticipated in 4Q20 or later if the need for an additional dose cohort arises. The opioid withdrawal study (RELEASE) is expected to yield data in 1Q21.

The company also expects to initiate a trial for delirium (~4.0 million) with a population that will include ICU patients with and without Covid-19.

Assuming approval – and short of a manufacturing issue, BXCL501 should be approved – the company is planning a commercial buildout in the U.S. while seeking marketing partners in the EU and Japan. A patent for BioXcel’s lead candidate is expected to be issued in 3Q120 that will extend its IP protection until 2039.

BXCL701. The company’s second clinical asset is BXCL701, an orally administered activator of the systemic innate immunity pathway through the inhibition of dipeptidyl peptidase (DPP) 8/9 and fibroblast activation protein (FAP). This asset has been assessed in over 700 healthy subjects and cancer patients, demonstrating solid tolerability and single agent activity in melanoma patients. EvolverAI determined that DPP 8/9 and FAP are most overexpressed in pancreatic and treatment-emergent neuroendocrine prostate cancer (tNEPC) and as such, BioXcel has elected to pursue those indications in the clinic, initiating Phase 1/2b studies. 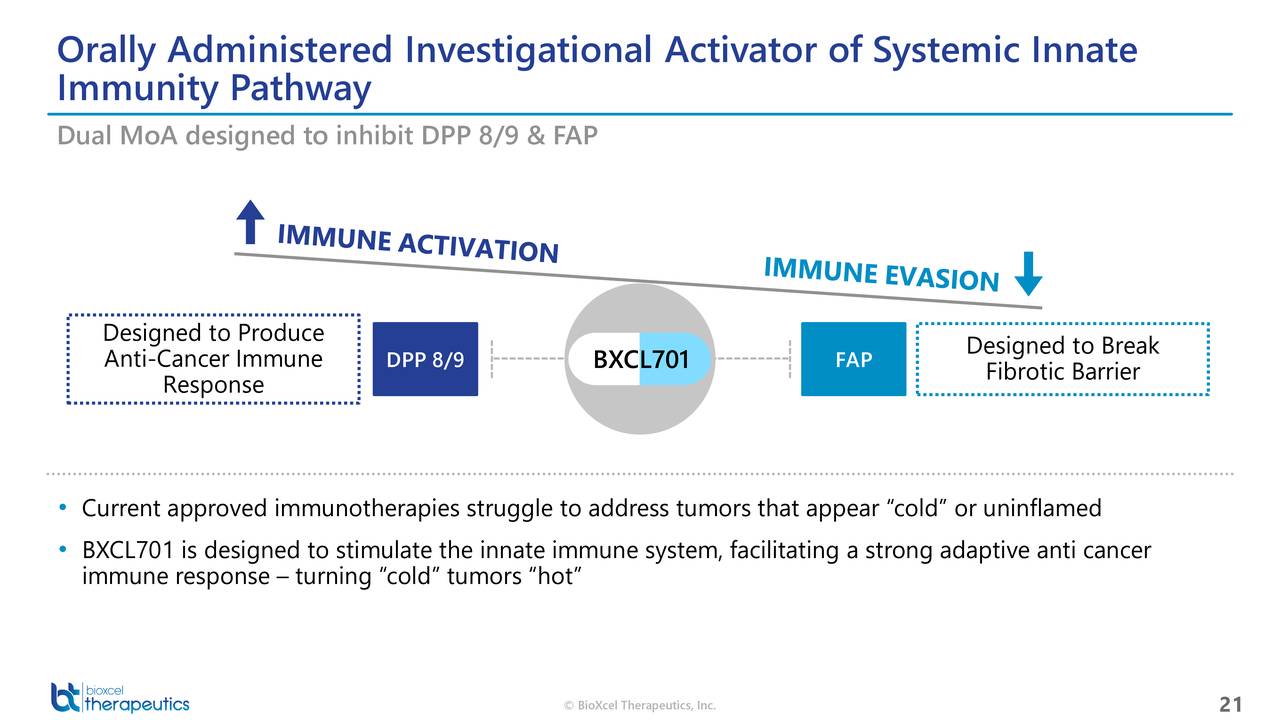 The Phase 2 portion of the tNEPC trial initiated in April 2020, assessing BXCL701 in combination with Merck’s (MRK) PD-1 inhibitor, Keytruda. A separate cohort evaluating the combination in the treatment of castration-resistant prostate cancer (adenocarcinoma) patients who have failed taxane-based chemo and up to two lines of second-generation androgen pathway blockers was initiated on August 4, 2020. Initial data from this study is anticipated in 2H20. Although the tNEPC population is relatively small with ~20,000 Americans progressing to this disorder annually, there are no approved therapies, giving BXCL701 the opportunity to become the standard of care for this indication. 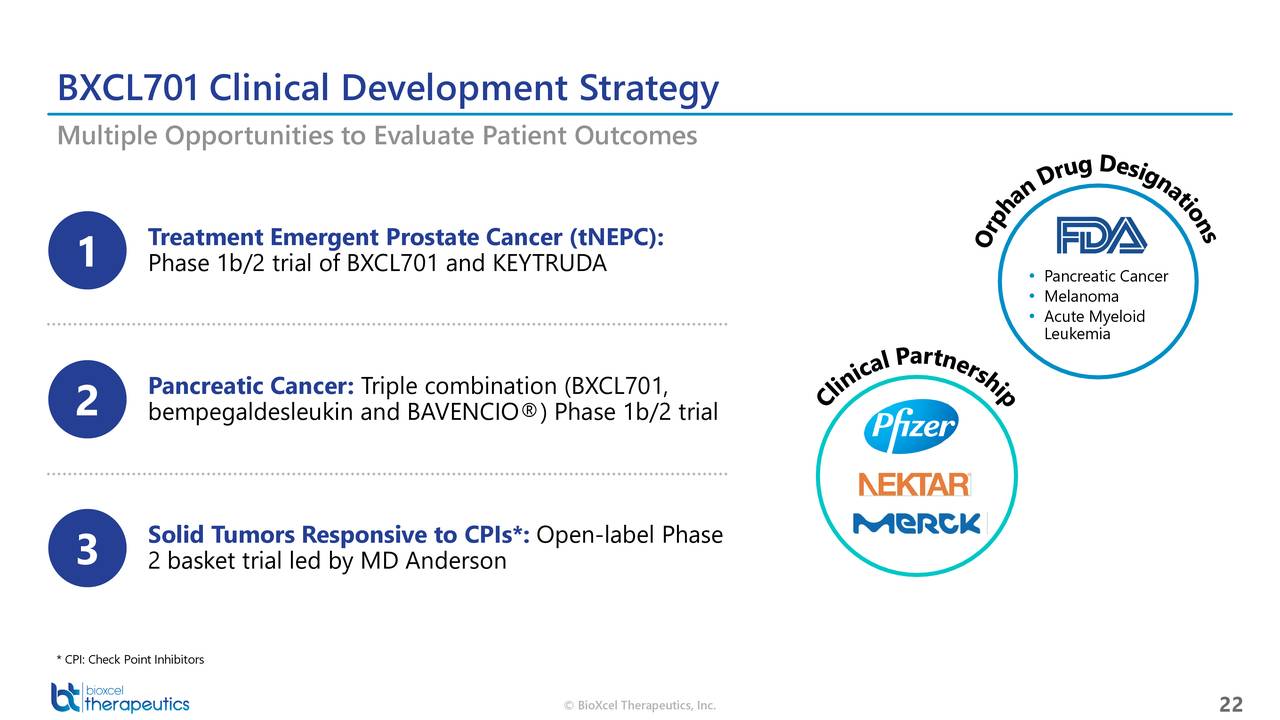 For pancreatic cancer, BioXcel is awaiting the outcome of a Phase 1B safety study involving the combination of Nektar Therapeutics’ (NKTR) immune stimulator bempegaldesleukin and Pfizer’s (NYSE:PFE) monoclonal antibody Bavencio (avelumab) before proceeding into a triple combo trial in 2H20. A mechanism of action study for BXCL701 was initiated in 1H19 with initial data expected by YE20.

In addition to these two specific indications, BXCL701 is being evaluated in combination with Keytruda in patients with advanced solid cancers. The MD Anderson-led Phase 2 open-label basket study consists of two arms: checkpoint naïve patients; and checkpoint refractory patients. Preliminary data are expected by the end of 2020.

BioXcel parlayed its positive SERENITY trial news into a capital raise, executing a secondary in July 2020 that added $187.5 million to the company’s balance sheet at $50 a share. Overall, the company has nearly $250 million cash on its balance sheet, which should be enough to fund operations well into 2022.

Street analysts are effusive in their praise of BioXcel, showering the company with six buys and one outperform rating and a twelve-month median price target of just north of $100. The latest bandwagon rider was Jeffries, who initiated coverage with a buy rating and an $82 price target on September 2, 2020. Price targets have been recently adjusted downward to reflect the ~20% dilution from the secondary, but enthusiasm remains strong.

There is good reason for the enthusiasm. Easily administered BXCL501 is a potential game changer. With a very statistically significant outcome in the treatment of agitation in both schizophrenia and bipolar disorder, it would appear that BXCL501 is attacking the cause of agitation (directly preventing the release of norepinephrine) and not the underlying cause, meaning that is will likely have success in other indications, including dementia and delirium. As such, it has easy blockbuster potential, making BioXcel a likely buyout target. With a novel AI platform (from its parent), another interesting early stage therapy in BXCL701, plenty of catalysts – the most important of which is the TRANQUILITY trial – ~$250 million in cash, and a market valuation of just $1 billion, BioXcel has multi-bagger potential. In fact, if results from TRANQUILITY approach that of the SERENITY trials, the stock should shoot substantially higher.

With that said, data from that trial may not be forthcoming until YE20 or possibly later, making BioXcel a solid name to accumulate on dips in the market or via covered call orders as its option premiums are large and liquid.

“A society gets the criminals it deserves.”― Val MacDermid

Bret Jensen is the Founder of and authors articles for the Biotech Forum, Busted IPO Forum, and Insiders Forum

Live Chat on The Biotech Forum has been dominated by discussion of lucrative buy-write or covered call opportunities on selected biotech stocks over the past several months. To see what I and the other season biotech investors are targeting as trading ideas real-time, just join our community at The Biotech Forum by clicking HERE.

Disclosure: I am/we are long BTAI. I wrote this article myself, and it expresses my own opinions. I am not receiving compensation for it (other than from Seeking Alpha). I have no business relationship with any company whose stock is mentioned in this article.