In my career as equity analyst and Chief Credit Officer, getting the short term right was critical in both positions. For stocks, a great deal of money is invested on the basis of “making quarters”, or near term earnings estimates. There is logic to this: if the market is efficient, a change in earnings versus expectations should lead to a price response. However, the focus on the short term can lead to stocks that become mispriced relative to long term cashflows. As a result, “patient money” has the potential for outsized returns. I am excited to write about one such idea-the apartment REIT EQR-as a “patient long” idea in Seeking Alpha-a forum which includes investors that aren’t always judged in the short term. We are also excited to discuss the following:

Apartments: why we believe problems are not long term

Apartment REITs have not participated in the strong broader performance of the stock market. EQR has fallen 31% year to date through the close October 7. There is a great deal of sense in this, as revenues have declined in the midst of COVID (more about this later in this writeup). However, we believe the issues are cyclical rather than secular for the following reasons:

We believe EQR’s share price EQR’s operating performance has been negatively impacted by an urban exodus due to COVID. Some have argued that this is a larger event related to Millennials aging into more of a single family home owner demographics (see JLL Chief Economist Shares His Millennial Exodus Redux, Mulitfamily Executive, by Ryan Severino, September 22 for more detail). Indeed, there is some truth to this, but we believe the outlook is more balanced. In Exhibit 1 below, we compare the U.S. population growth of 25-34 year olds (which we call the “prime renter” population) versus 35-49 year olds (which we will call the “kids at home” population most likely to own a home) from 1995 through 2025. We note the following:

· Growth in prime renter age is slowing….U.S. 25-34 year old population growth in the United States peaked in the middle of the last decade, and is expected to decelerate to negative growth midway through this decade.

· ….while growth in kids at home is at the highest level in decades, expecting to average over 1% through 2025.

Exhibit 1. Growth in renter age Americans is expected to slow…

As such, the report of the death of apartments has been greatly exaggerated.

If demographics do not drive rent growth, what does? The economy. The Census Bureau has terrific long term data on rent inflation (which is a component of CPI). Exhibit 2 below shows year over year urban rent inflation the last 30 years. Notably, Urban rent growth (the EQR portfolio is split 55% between urban and suburban) decelerated after the last three recessions, and appears to be following the same pattern now. As a result, we believe there is evidence that we are following a normal (although potentially severe) pattern of weaker cashflows during recessions. With the Federal Reserve forecasting GDP growth in 2021, the potential for apartment rent growth to recover is encouraging.

Exhibit 2….but the economy drives results more than demographics 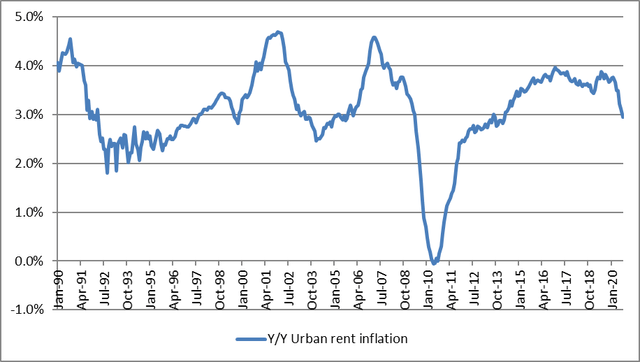 Where do the renters come from without an increase in people of renter age? Please note that in recessions, “doubling up” and living with parents can increase, while the opposite can occur as an economy recovers. Also, corporate housing can be an incremental driver of demand in strong economies (EQR on its 2Q earnings call noted that corporate housing loss has been a drag to performance).

EQR’s markets are in the high cost coastal markets, with the largest exposure in San Francisco (19.8% of stabilized NOI), Los Angeles (19.1%) and Washington DC (15.8%) and New York (14.6%). According to Business Insider, for each of the eight Ivy League Schools, three out of the top four cities to live in were EQR markets. I believe there is too much critical mass for this constant annual migration of talented and well-educated to end.

We believe current conditions will lead to a supply response, which may already be starting. As seen in Exhibit 3 below, TTM housing permits show a dramatic change, where multifamily growth has collapsed and single family has accelerated. Please note this will take some time to impact new completions: the BLS estimates on average it is over two years between permit draw and completion. As a result, the actually number of units under construction according to the BLS is up x% on a year over year basis as of August. However, declining permits today in multifamily could lead to a supply response in 2023.

Exhibit 3. Multifamily permits have begun to sharply decline while rising for Single Family 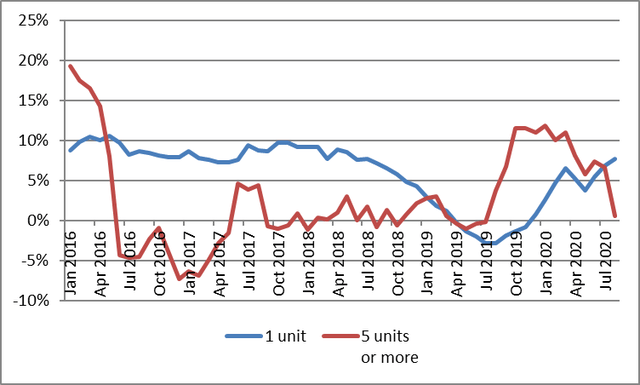 There are two ways to frame the value proposition for EQR: 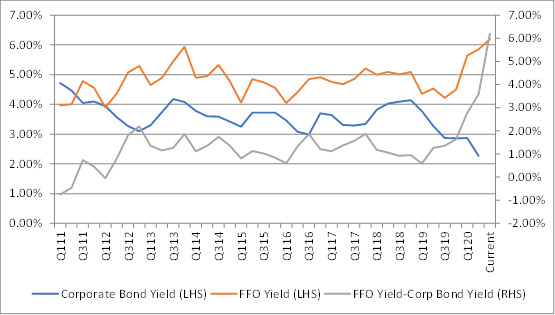 Similar to the bond comparison, forward EQR NOI will be worse than 2Q, but the 100+ basis point spread in cap rate leave a lot of room for error.

We are often skeptical of NAV comparisons as companies are not always incentivized to sell. We are heartened, however, that Sam Zell, the Chairman, was also the Chairman of Equity Office, which was purchased by Blackstone in 2007.

Apartments: when they should perform

The argument above supports a “buy and hold” view on EQR with an admonition there could be some gut checks along the way. However, we offer the following potential guideposts: 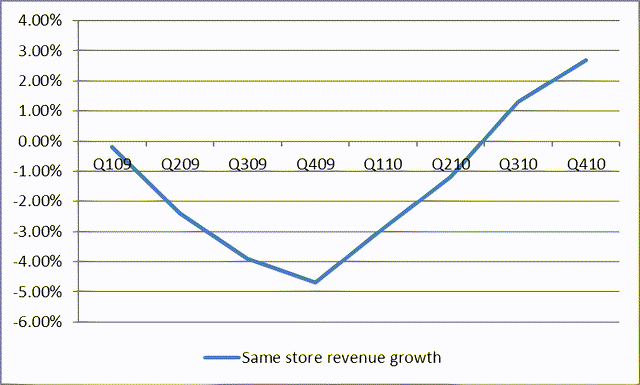 Please note apartments are showing no sign yet that revenues declines are getting “less bad”. A key forward indicator is leasing spreads (the change in rents on signed leases versus the prior year). Leases signed today give a sense of forward revenues.

Recent leasing spread data has not been constructive. We note the following:

Again, this data supports a long over short term argument. We do think conditions today will create “easy comps” in the future (the burn off of concessions was a major support of EQR revenue growth in 2010).

Options and investing in deep value without catalyst

Given the upside catalyst for EQR is potentially years away, and there is risk the stock could trade down in the interim, option strategies (such as covered calls and short puts) can be ways to enhance returns for options with maturities dated ahead of catalyst dates. We offer the following examples using April 2021 dates, which could be prior to widespread vaccine use. Please note option prices used are for illustrative purposes only:

Covered Call (own the stock and sell a call against the position): For illustrative purposes, assume an April 2021 $60 call is priced at $3 when the stock is at $55. There are two potential outcomes:

Short Put (sell a put): For illustrative purposes, assume an April 2021 $50 put is priced at $3 when the stock is at $55. There are two potential outcomes:

We particularly like short puts as a “paid to wait” strategy as it is a good way to be “forced to buy the dip”.

EQR is the classic example of a stock I believe is undervalued due to a significant amount of capital investing on a “beat the quarter” basis. However, this creates outstanding value for investors with a multiyear horizon. I believe in a three year horizon, it is likely the U.S. will return to an expansion, while supply is abating. In this backdrop, EQR’s revenue growth will accelerate against easy comps and investors will be rewarded. We are most emphatic about this relative value versus fixed income and note tax loss sale period could be an opportunity to have a particularly attractive entry point for the stock. Finally, we think buy-write and short put strategies work well in a “paid to wait” strategy.

Disclosure: I am/we are long EQR. I wrote this article myself, and it expresses my own opinions. I am not receiving compensation for it (other than from Seeking Alpha). I have no business relationship with any company whose stock is mentioned in this article.