In the past few weeks, we argued that the lack of stimulus (both monetary and fiscal) has increased the fragility of the stock market, which has been mainly relying on the massive liquidity injections from central banks since the start of the pandemic. Even though some analysts are convinced that the recovery in the stock market was partly associated to the massive improvement in economic data (figure 1), we think that the recent rise in economic surprises indexes could be misleading as most economies were in complete shutdown in the second quarter of this year.

We are confident that the significant reduction in unemployment benefits (from $600 to $300 a week in the US) in addition to the uncertainty over a ‘stimulus agreement’ will be reflected in poor fundamentals in the coming months. Hence, with no help from the government or the Fed (assets have been steady at around USD 7 trillion in the past few months), what could lift up US and global equities in the near to medium term?

China: a quiet government and central bank since COVID-19

Surprisingly, we saw that China, which has been one of the world’s key players to help the global economy recover from the Great Financial Crisis, has been very quiet in the past few months. The size of the PBoC’s balance sheet has remained steady at around CNY 36 trillion (USD 5.4 trillion) since the start of the year (no increase in assets in the past 6 months), which is quite remarkable relative to the other major developed economies. In addition, the government’s interventions have been minor relative to other nations such as Italy or the US.

Figure 2 shows the amount of fiscal and monetary ‘stimulus’ for each economy since the start of the year and ranked them based on the total amount of the country’s GDP (computed by Bank of America in July). We can notice that Italy comes first with a total stimulus of 53.3% of the nation’s GDP, closely followed by Germany (49.5%) and Singapore (42%).

China sits at the bottom tier of the table with a combined fiscal and monetary stimulus totaling 7.2% of the country’s GDP.

But do not forget the rise in Total Social Financing

Even though a significant amount of investors mainly focused on the dynamics of fiscal and monetary policies in China, it is also important to follow the growth of Total Social Financing (TSF), China’s broadest measure of credit and liquidity. Figure 3 shows that the annual change in China TSF reversed from -3.7 trillion CNY in December 2018 to CNY 8.7 trillion in August 2020, which has historically been a positive factor for risk-on assets. 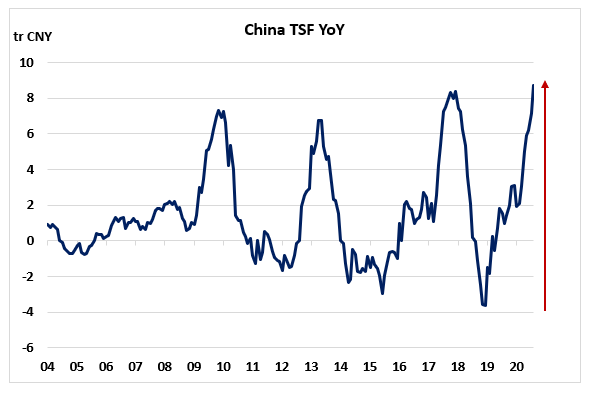 First of all, China TSF has been a good leading liquidity indicator of global equities in the past 10 years; figure 4 (left frame) shows that the annual change in TSF has led world equities by 6 months. In addition, we can notice that the rise in China credit impulse has been also positive for China-sensitive risky assets such as copper or the Australian dollar (figure 4, right frame).

Hence, it will be interesting to see if risky assets will maintain their trend as we are entering the winter period and the uncertainty over a second lockdown is constantly increasing.

The second important leading liquidity indicator we also like to watch for China is the excess liquidity, which we compute as the difference between real M1 and industrial production (note that we use China PPI inflation when we compute real M1 money growth as the PPI shows a better co-movement with the 10y yield than CPI inflation).

As for the TSF, the excess liquidity has also been a good indicator for risky assets, especially some international real estate markets. For instance, figure 5 (left frame) shows the striking co-movement between China excess liquidity (6M Lead) and the Australian housing market. The strong rise we observe in February/March was mainly coming from the collapse in industrial production, but excess liquidity has been trending slightly higher in recent months amid the surge in real M1.

Figure 5 (right frame) shows that China excess liquidity has also strongly led London house prices by 6 months, which has raised the question if China liquidity could save the City’s housing market that is expected to be massively impacted from the restrictive policies recently imposed by the government.

Even though China’s liquidity may have contributed to the recovery/growth in risky assets in the past few months, we think that it may not be enough to sustain the trend in global equities in the coming 6 months, especially if governments start to impose a second lockdown in order to fight the pandemic as we approach the winter period. We expect fundamentals to start to deteriorate gradually in the next quarter and volatility to remain elevated as we approach US elections. We think the US dollar remains the risk-off asset to hold at the moment and we also like low-correlated equity sectors such as global mining.

Disclosure: I am/we are long USDCHF. I wrote this article myself, and it expresses my own opinions. I am not receiving compensation for it (other than from Seeking Alpha). I have no business relationship with any company whose stock is mentioned in this article.