Commvault (NASDAQ:CVLT), a data backup and recovery solution, has made impressive strides in reinventing its business over the last few years. The company is known for its backup and recovery software, and independent analysts such as Forrester, Gartner, and IDC consider Commvault the best solution in the market. Despite having the best product in the market in terms of capabilities, Commvault lost momentum in the market, leading to the CEO being fired and activist investors taking a position in the name. Over the last few years, IT architectures have gone through a significant transformation, with enterprises deploying applications both on-prem and in the cloud in what is called hybrid architecture. On top of this, newer technologies such as containers and microservices are being used to build applications. To address these developments, the company re-architected its product line, launched new products (Hyperscale) based on its flagship software, acquired Hedvig, a software-defined storage company, and launched simplified licensing models. Aided by the changes mentioned above, driven by solid execution, new go-to-market products, and strategies, we expect Commvault to increase growth rates north of 10% in C2021 and beyond. On top of this, we believe the estimates are reasonable and the valuation compelling. Given our confidence in the management team and the product portfolio, we believe Commvault is set to exceed expectations. Therefore Commvault is a buy.

Commvault’s backup and recovery software is extensible, full-featured, and is the most robust anywhere. However, newer entrants such as Veeam, Rubrik, and Cohesity attacked the market with simpler products that addressed one or two most critical needs. These newer entrants began attacking Commvault at the mid-market segment and have had enormous success in stalling Commvault’s growth. Veeam, for instance, vaulted from having a market share that is around 3% in 2011 to over 14% market share in 2019, in a span of eight years. Despite the enormous competition and trouble in the mid-market, which we mentioned before, Commvault managed to gain 417 basis points of share, mostly focusing on the higher end of the market. Commvault’s market share gains despite enormous challenges give us confidence that customers appreciate the strength of Commvault’s offerings. With product and pricing simplification, in addition to newer product bundles, we believe Commvault is set on gaining momentum in the mid-market.

Commvault historically had one of the best backup and recovery solutions in the market. Third-party vendors such as Gartner, Forrester, etc., usually consider CVLT’s offerings best in class. Despite this stellar rating, Commvault has ONLY the fourth largest market share beyond Veritas Software, IBM (NYSE:IBM) Tivoli Storage Manager, and Dell/EMC (NYSE:DELL) Networker. The ranking has not changed for many years, given that share gains/losses are very slow to materialize. Commvault’s main problem is that its offerings are too complex, and the pricing is opaque. Nimbler vendors such as Veeam architected their offerings so that a customer can install and configure the product easily without needing expensive services engagement. More importantly, customers can download the software and try it for free before purchasing it. This led to rapid adoption in the SMB market at the expense of Commvault and other large vendors in the market. The following table illustrates the Backup and Recovery market shares.

Source: Author, based on Gartner data 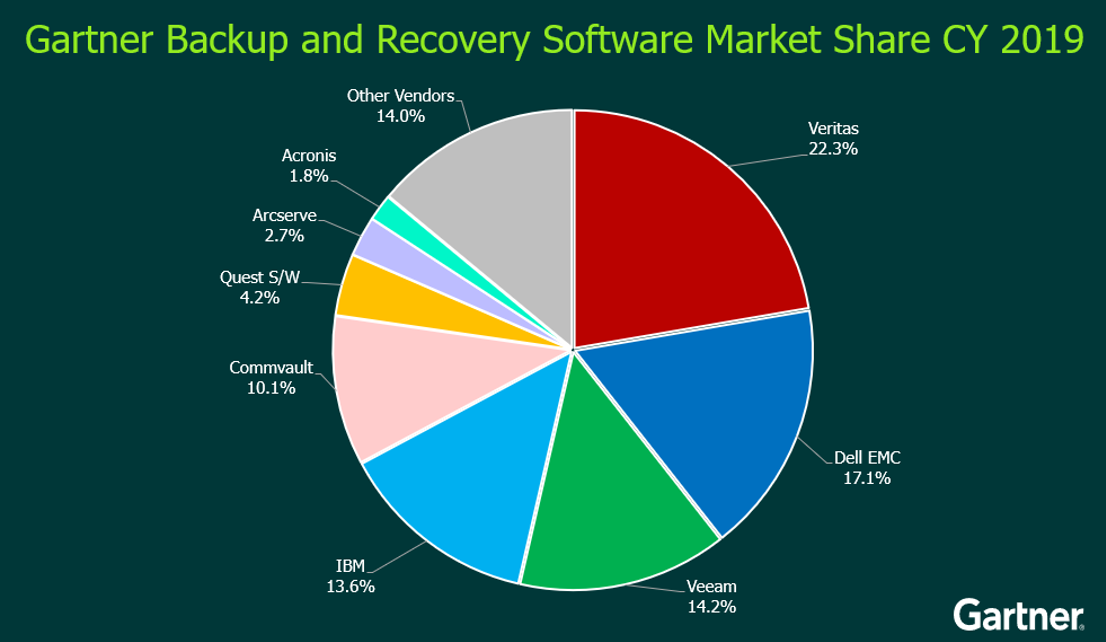 Expect Metallic to be launched on other public clouds

TAM is growing at least 10%

According to MarketsandMarkets, the data backup and recovery market is projected to grow from about $6.58 billion in 2016 to about $11.59 billion by 2022 or growing at 10.2% CAGR in the time period. According to MarketsandMarkets, “major drivers of the data backup and recovery market include rapidly growing data and an increasing focus on operational excellence and data quality management. The increasing adoption of cloud data backup solutions is also a major factor driving the market”. Layering on top of this, the primary storage market which the company has now entered, we believe Commvault’s TAM is growing at least 10% from the current levels. We believe there is no reason why Commvault cannot grow at 10%, especially after the recent launch of Hyperscale X, Hedvig, and the Metallic product lines.

After analyzing consensus estimates, we believe Commvault estimates are conservative. The Street is forecasting revenue to decline by 1% in C2020 and grow only 3% in C2021 and 5% in C2022. While we understand that software revenue is under-duress due to the model transition, we believe the estimates may be too conservative, mainly because the Backup and Recovery market is growing around 10% and the subscription renewal cycle that is currently underway. We believe Commvault now has multiple products (Metallic, Hedvig, Hyperscale X), all that can be sold on a subscription basis. These newer products, such as Hyperscale X and Hedvig, did not exist before the arrival of the CEO, and will drive growth over next two years. The following chart illustrates consensus estimates.

Risks to owning the stock

What is exciting about Commvault

Since the company reported results on July 28th, Commvault stock is only up 1.54% when compared to Nasdaq that is up 13.14% and S&P up 8.39%. The following graph illustrates the underperformance since the report. 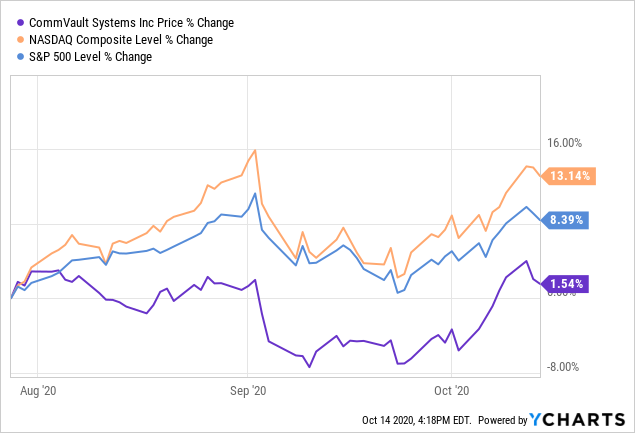 Over the last one year, Commvault significantly underperformed both the Nasdaq and S&P 500 indices. CVLT is down 4%, while Nasdaq is up 46%, and S&P is up 17%. The following chart illustrates the underperformance. 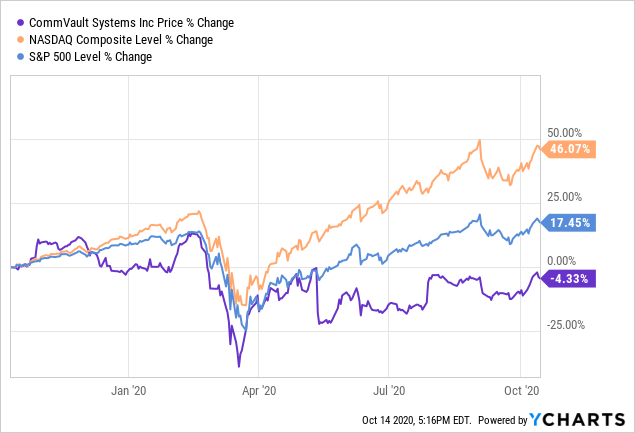 We believe the worst is behind for the company, and now it has multiple growth drivers to aid the stock recovery. The drivers include simplification of the product line, unbundling of the product into various individual solutions, newer product to address the growth areas such as hybrid cloud and software-defined storage. Commvault is now a credible alternative to hot-shot emerging growth companies such as Rubrik and Cohesity. In addition, we expect tailwinds from the renewals and reasonable valuation to drive the stock higher.

What to do with the stock?

We recommend investors take a position ahead of its earnings on October 27th. We expect the company to report results that will be in line, and the company will provide guidance, which is likely to be ahead of estimates given that federal year end, as well as calendar year-end budget flush. If the stock sells off for any reason, we would recommend investors back up the truck and add to their positions.

Disclosure: I am/we are long CVLT. I wrote this article myself, and it expresses my own opinions. I am not receiving compensation for it (other than from Seeking Alpha). I have no business relationship with any company whose stock is mentioned in this article.