I took on a role as chronicler of the tales of CytoDyn (OTCQB:CYDY) with enthusiasm over recent months. I wrote articles, participated in comment streams, purchased and sold shares (on the long side only) and generally edified myself as I hibernated in COVID-19 induced isolation.

After a longish period as a strong CytoDyn skeptic, I had moved from a bearish view to a neutral stance and then cautious optimism. In the first bullish article, “CytoDyn’s COVID-19 Game Changer”, I tried to draw a nuanced portrait of CytoDyn’s risks compared to its prospects.

Such article featured a bullet point that “CytoDyn’s leronlimab is shaping up as a prime contender to be a preferred COVID-19 therapeutic”. I would be hard pressed to make that statement today. This article reviews recent developments that have diminished CytoDyn’s prospects.

CytoDyn was early in advancing its leronlimab as a COVID-19 therapy. Its EIND program success was highly suggestive that leronlimab would prove out as effective in treating COVID-19. More importantly, CytoDyn mapped out a phase 2 clinical trial (“CD10“) for mild-to-moderate patients and a phase 2/3 trial (“CD12“) for severe/critical patients.

CD10 was a trial designed for 75 patients, although 86 were actually treated. It required 14 days of weekly treatments with 700 mg leronlimab or placebo with study participants randomized 2:1. The primary outcome measure was:

CytoDyn’s CEO Nader Pourhassan (hereafter “NP”) encouraged shareholders to expect quick readouts of the data from CD10. As it turned out, CytoDyn began reporting driblets in various press releases. In what has become a tedious stylistic trope, the headlines for the releases have been overblown with the content often unremarkable.

This was particularly true of CytoDyn’s first such release in the early hours of 7/21/20, subsequently corrected a few hours later, as discussed in “CytoDyn’s COVID-19 Trial Tribulations”. The bottom line is that CD10 missed its primary endpoint.

In a subsequent 8/11/20 press release, CytoDyn announced that CD10 achieved statistically significant results in a key secondary outcome measure, National Early Warning Score 2 scale (NEWS2). In its 8/12/20 conference call CytoDyn announced that it had applied to the FDA for an emergency use authorization [EUA] based on the “fantastic” NEWS2 news.

As far as I have been able to tell, this was the situation that shareholders thought was applicable until NP’s 9/23/20 interview with Dr. Been. In this interview NP explains that CytoDyn ran the idea of applying for an EUA by the FDA but elected not to when it became clear that it was unlikely to succeed.

As for CD12, it is a bigger phase 2b/3 trial with a longer treatment period. Full enrollment requires 390 patients, although as a phase 2b/3 trial there will be a preliminary read out when half of the participants have been treated. The treatment is the same as CD10 but extended to include weekly doses of 700 mg leronlimab or placebo for 28 days, randomized 2:1.

The action for CytoDyn at the current point is all about CD12. During CytoDyn’s 8/12/20 conference call, NP advised that 175 patients had been enrolled, just 20 less than the 195 required for the interim analysis. By 9/23/20 NP advised during his Dr. Been interview that enrollment stood at ~215. He rightly noted the criticality of completing the trial avowing an intent to do so by the close of 2020 with data submitted to the FDA.

Moving on to CytoDyn’s 9/30/20 shareholder’s conference, CytoDyn issued the following slide relevant to CD12 (discussed 24:05-25:20/1:16:01). During the discussion on CD12, NP emphasized how information already known from the EIND and from the safety look following 100 patients treated derisked the situation. He posited that the interim analysis presents the potential first time a COVID-19 trial hits a primary endpoint of mortality. 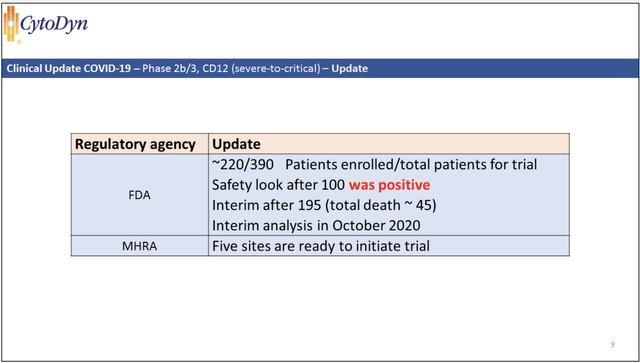 As I write on 10/14/20 this interim analysis is looming. Depending on how it plays out CytoDyn’s shares will likely blast, either forward or backwards.

NP was at his most effusive during a Wednesday, 10/7/20 interview on Fox Business News. He opened with a brief review of PD10, moving quickly to anticipated results in CD12 by the “end of next week” (10/16/20). Noting how leronlimab has proven “fantastic” in ~60 EIND COVID-19 patients and safe in multiple trials for HIV, he expressed great optimism on its upcoming report.

He emphasized how the end of next week was huge for CytoDyn. He suggested that he was looking for approval not only from the FDA but also from other countries’ regulatory bodies on the basis of the interim analysis of the first 195 patients.

Let’s take a look at CytoDyn’s recent price movements over this year to date. They have been very much dominated by its COVID-19 prospects as demonstrated by review of cited articles with COVID-19 in the title:

The matrix below showing CytoDyn’s share prices and volume from 6/16/20 to 7/1/20 gives a less graphic but more granular view of the price action leading up to the spike shown in the price graph above: 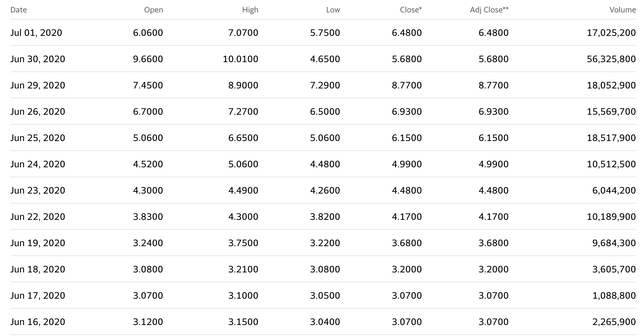 It is never possible to know exactly what moves a stock, particularly a charmer like CytoDyn where there is so much churn. Nonetheless, I consider that a big part of its late June 2020 spike arises from enthusiasm generated by Bruce Patterson’s TEDx talk of 6/17/20 (from 09:08-28:50/3:08:37).

In “CytoDyn’s COVID-19 Game Changer“, I discuss how this talk filled out my appreciation of leronlimab’s prospects in treatment of COVID-19. My conclusion was:

I am optimistic about CytoDyn’s prospects as a COVID-19 therapy based upon Dr. Patterson’s analysis. I have been selling pieces of my modest stake as CytoDyn’s price has been rising. When I realize how hesitant I am to cash in further on CytoDyn’s current enhanced share price, I realize that CytoDyn has me well in its fold for the time being.

CytoDyn has lined up millions of doses of its unapproved therapeutic at great cost, without any government assistance

Is it confidence? Is it bravado? Is it a PR stunt? Is it craziness? Little CytoDyn which has never generated a single dollar of product revenue, which has no product that has been approved anywhere, has an agreement (p. 23) with Samsung calling for it to pay tens of millions of dollars for the production of leronlimab at scale.

Without feeling any pain, Big Pharma can write checks for tens of millionss, the government can do the same. CytoDyn cannot. A brief glance at its financial statement from its Q3, 2020 10-Q (p. 3) shows this, per the excerpt below:

With a cash hoard of $18 million, Samsung’s bill for $28 million yet owing is going to require some extra effort. Add into the mix CytoDyn’s routine operational expenses as shown below (p. 4): 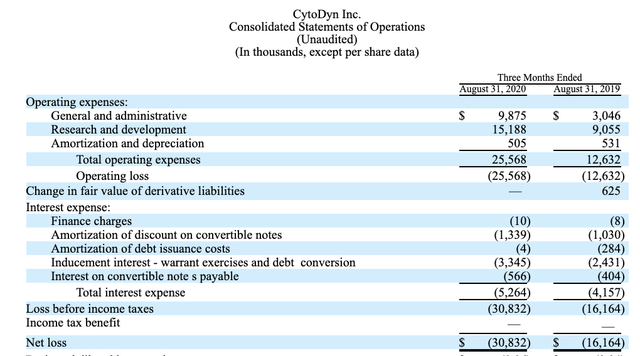 If you wonder, how in the world do these guys keep the lights on, you are not alone.

NP decries negativity; he is unconcerned about any cash crunch. As he views the situation, CytoDyn’s stock is woefully undervalued. In his 9/23/20 interview with Dr. Been he discusses the issue of fundraising with a cavalier confidence that is his hallmark. He told Dr. Been that he was rejecting offers of “getting money-forty million, fifty million we reject it”.

The strangest thing of all is that CytoDyn has made no apparent effort to qualify for government funding. In response to a question about possible BARDA funding during CytoDyn’s 7/30/20 COVID Update Conference, NP noted the small size of his team; he considered such an application as a headache that would take a lot of time.

As a shareholder, I consider this shortsighted to say the least, and I am putting it mildly. Operation Warp Speed [OWS] is handing out money in big chunks, hundreds of millions of dollars here, a billion+ dollars there for unproven COVID-19 vaccines and therapeutics to ramp up production.

CytoDyn should be in the hunt for these funds. They are a potential source of non-dilutive financing. The fact that NP can raise the money from shareholders does not make it right to try to do so.

As a shareholder I find his attitude distressing. Success can cure a multitude of sins. After CytoDyn’s bungling of its BLA, I have it on a short leash as do many other shareholders as is clear from Seeking Alpha comment streams.

If CytoDyn nails results from CD12 as NP has forecast, I expect many shareholders will let bygones be bygones. Otherwise I expect a severe price correction. Count me as a CytoDyn shareholder with high anxiety.

Disclosure: I am/we are long CYDY. I wrote this article myself, and it expresses my own opinions. I am not receiving compensation for it (other than from Seeking Alpha). I have no business relationship with any company whose stock is mentioned in this article.

Additional disclosure: I may buy or sell shares of CytoDyn overthe next 72 hours

ASX 200, NIKKEI 225 INDEX OUTLOOK: All three major US indices tumbled over 3% on virus resurgence and lockdown concerns VIX Volatility Index soared to a six-week high amid souring sentiment, the US Dollar Index […]