While Disney (DIS) is a great company, the world in which the media giant operates is under massive pressure causing unexpected disruption. For whatever reason, investors appear willing to pay premium prices for a stock not expected to return to 2019 earnings levels until FY23 (ends September). The latest corporate update reinforces the reasons for avoiding Disney at $130.

Too Focused On Streaming

Considering Disney is a massive conglomerate in the media and entertainment industry, the shift of the business towards a direct-to-consumer focus that just started last year shows desperate times for the company. Especially considering the Disney+ video streaming service doesn’t even charge a monthly rate equivalent to the average movie theater ticket price.

For FQ3’20, Disney+ subscribers surged to 57.5 million, but the average monthly fee was only $4.62. The company is only generating $266 million in monthly revenues from the SVOD service, while providing consumers with access to all of their content. Prior to COVID-19, Disney had single movies that would top these monthly revenues alone. 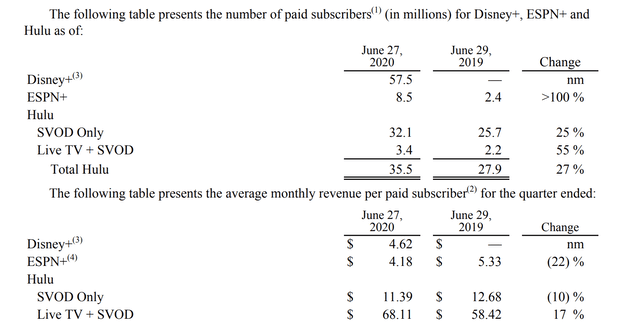 Due to the bundle with Disney+, ESPN+ also saw monthly subscriber fees dip 22% from last year to only $4.18. The early subscriber success is partly due to Disney giving away these services at price levels far below costs via traditional cable networks and movie theaters.

The company now has over 100 million DTC subscribers, yet, combined Media Networks and DTC & International revenues were down for the June quarter. Part of this was the difficult environment, but also viewers won’t be returning to cable networks in the future. As well, one has to wonder how well Disney movies perform in the future when movies are now more easily viewable on Disney+ for a very affordable price in comparison to lugging multiple kids to a movie theater.

During the strategy reorganization announcement, CEO Bob Chapek had this to say on the new strategy:

Managing content creation distinct from distribution will allow us to be more effective and nimble in making the content consumers want most, delivered in the way they prefer to consume it. Our creative teams will concentrate on what they do best – making world-class, franchise-based content – while our newly centralized global distribution team will focus on delivering and monetizing that content in the most optimal way across all platforms, including Disney+, Hulu, ESPN+ and the coming Star international streaming service.

In essence, Disney will focus on the creation of content by one division and allow the other divisions to focus on how to distribute and monetize. A big question exists on whether this disconnect will lead to un-monetizable content.

A company re-orged around video streaming isn’t as appealing when content wasn’t created with this goal in the last few years. Disney losing all of the studio movie revenues in order to add subscribers at half the Netflix (NFLX) ARPU doesn’t sound like a great business plan.

Despite a period in 2019 where Disney traded close to $150 based on irrational excitement over Disney+, the stock hasn’t really traded above $130. With all of the disruption in the business with parks closed in areas such as California and a lot of movies pushed back into 2021, the current business environment doesn’t appear rewarding enough for these stock levels.

Analyst EPS estimates are down substantially from previous levels due to the business disruptions, but the lower numbers are also due to higher expenses from the DTC business. In the current quarter, the DTC&I business is expected to produce a whopping $1.1 billion operating loss.

Somehow, Disney has to smash these estimates out of the park in order to make the stock worth buying here. The upside appears capped, while the downside is the more logical path with so many unknowns in the media and entertainment sector still.

The key investor takeaway is that Disney will figure out how to align the business to generate strong returns for shareholders, but in the short term, the business has too many disruptions and additional costs to warrant a higher price. Investors should use any rally to unload Disney above $130, and especially closer to the recent upper $130s, where the stock is ridiculously expensive.

If you’d like to learn more about how to best position yourself in under valued stocks mispriced by the market, consider joining Out Fox The Street.

Additional disclosure: The information contained herein is for informational purposes only. Nothing in this article should be taken as a solicitation to purchase or sell securities. Before buying or selling any stock you should do your own research and reach your own conclusion or consult a financial advisor. Investing includes risks, including loss of principal.

Quick Take Lufax (LU) has filed to raise $2.2 billion in an IPO of its American Depositary Shares representing underlying ordinary shares, according to an F-1 registration statement. The firm has developed an online personal […]