First Solar, Inc. (NASDAQ:FSLR) has been going through a transformation over the past couple of years. The company is selling off non-core assets and focusing on operations that the company believes will make it more profitable in the future. FSLR has settled the class-action lawsuit, and now it can focus its resources on series six module production and solar projects. In 2019, the series six modules had over 12 GW of contracted backlog (roughly 26.7 million panels), securing enough PV solar panel sales for 2020 and a part of 2021.

The company sold off its EPC division in September 2019 and its O&M business in 2020. Now it is more focused on manufacturing PV solar panels (modules) and project development (systems).

The systems division is the part of the company that creates solar projects for non-residential clients. This division’s net sales are very volatile because sales do not occur as frequently as in the modules division. When a deal does happen, it usually is substantial. The good part about this division is that a project’s sale also creates sales for the module division.

Some FSLR investors are worried about the telluride supply chain, one of the primary ingredients used to make solar panels. At first, I was too because I found information from a solar industry website stating that a large percentage of telluride comes from China. China and the U.S. have been in a trade war for some time now, and the outcome of this trade war could have adverse consequences on industries that rely on products from China. Furthermore, the article informed us that without China producing telluride, the industry could experience a short-term (a couple of years) shortage in telluride until ocean-based telluride mining becomes fully operational.

As I have come to learn from this website, this China/telluride theory is not correct. On the mining association website, the article informs us that Canada produced over half of the telluride that the U.S. imported in 2018. To prevent us from falling into a fake news trap, I decided to look for an even better source to confirm this information. I found that source, the U.S. Geological Survey, Mineral Commodity Summaries. In 2018, the U.S. imported 119 tons of telluride from Canada, 32 tons from China, and 24 tons from Germany. Canada is the most important telluride producer for the U.S. market, not China.

Based on the above information, I believe that First Solar could experience a slight disruption in its supply chain, but nothing as catastrophic as the gloom and doom scenario presented to us by Solar Feeds.

SEIA’s 2020 updated market outlook is still pessimistic due to the coronavirus, but it is a lot less pessimistic than it was a couple of months ago.

As you can in Figure 1, SEIA changed its forecasts for 2020 and beyond. Initially, it believed that the installation of new capacity in megawatts would decline by almost 32%, and now it shows that it should decrease by only 11%. The industry didn’t provide 2022 and 2023 updated estimates, so I used the average between the baseline and COVID-19 impact data to calculate these years. From 2019 to 2023, SEIA and my estimates demonstrate that capacity installation should increase by 1.6% instead of 1.9% as per the baseline estimates.

I consider SPWR, CSIQ, and JKS to be First Solar’s direct peer group. I do not believe ENPH and SEDG belong to the immediate peer group because they focus on creating systems for customers with solar panel systems. FSLR’s direct peers had an average y-o-y sales decrease of 11.1%, and its peers had an average decrease of 7.5%. First Solar’s 2Q20 net sales increased by 9.8%, about 17.3 percentage points more than the average. 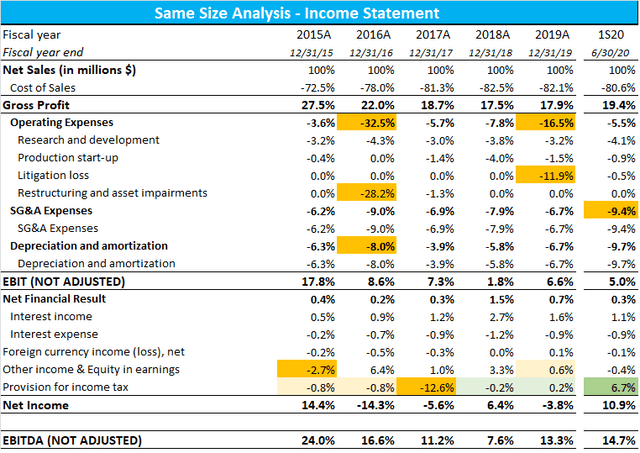 I presented Figure 2 in my last article on First Solar to show how its margins are improving. Even though I believe margins are improving, the company’s operations have changed drastically over the past couple of years, making it harder to forecast future margins. I started researching this article, hoping to present you with a DCF model, but the margins are just too volatile, and they are based on operations that no longer exist. I believe that the best strategy to value FSLR is by using an exit multiple model based on net sales.

Using the information provided by the company, I was able to estimate what its net sales would have been if it had sold the EPC and O&M operations in 2014. Important: the 1H20 and future forecasted net sales don’t include the residual sales from the operations FSLR sold over the past year.

From 2015 to 2019, total net sales grew at a CAGR of 3.4%. I estimate that the company’s total sales will grow at a CAGR of 8% (2019 to 2024). Using historical data and SEIA information, I believe that solar modules and solar power systems will grow at a CAGR of 9.7% and 5.6%, respectively. A 5.6% growth doesn’t seem like enough to be bullish about, but you need to remember that I said that solar power systems sales complement solar modules sales. After making my forecasts, I compared my net sales to the average analysts’ estimates. In 2022, I estimate that the company’s total sales will be $2.95 billion, while analysts believe it will be $3.03 billion. My 2020 and 2021 estimates are below analysts’ average expectations because I do not include the residual EPC and O&M sales. In 1H20, these residual sales added up to be around $104 million to give you an idea of the residual sales size.

Figure 4 demonstrates the possible exit multiples for FSLR in 2024. SPWR, CSIQ, and JKS are the company’s direct peers, meaning their operations best resemble FSLR’s operations. The only issue with these direct peers is that I believe they are trading at a discount because they have large amounts of debt in the current liabilities section. This is why the direct peer group has an average quick ratio of 0.5, while the total peer group has an average quick ratio of 1.5. Thus, I decided to include ENPH and SEDG, which are companies focused less on creating physical equipment and more on creating systems to run the physical equipment. Keeping this issue in mind, I weighted the multiples and arrived at an average P/S exit multiple of 3.5x and an EV/Sales exit multiple of 3.7x.

Table 2 demonstrates three possible exit multiple scenarios based upon my forecasted sales for the company in 2024. The optimistic scenario is the most likely scenario, with a probability of 69.3%. The company currently trades at multiples slightly less than the ones used to estimate its target price. The probability that the very optimistic or pessimistic scenarios occur is 13.4% and 11.6%, respectively. Using these probabilities, my estimated target price is $110.50.

I am bullish on First Solar based on the information provided in this article. My target price estimate of $110.50 has a possible long-term (three to five years) return of 61.2%. As long as FSLR focuses on its strategy of producing solar panel equipment and providing clients with project development services, I see no reason why the company can’t exceed market analysts’ expectations.

My target price is 16.3% more than the highest estimated target price by market analysts. I believe that the reason for this is because my estimates are based on forecasts beyond 2022, which is when most analysts stop their forecasts.

If you like what you read, please “Follow” me via Seeking Alpha. I typically only cover the Brazilian markets, the Robotics Industry, and the Food Industry.

Disclosure: I/we have no positions in any stocks mentioned, but may initiate a long position in FSLR over the next 72 hours. I wrote this article myself, and it expresses my own opinions. I am not receiving compensation for it (other than from Seeking Alpha). I have no business relationship with any company whose stock is mentioned in this article.