It took a pandemic for investors to finally take notice of Fiverr (FVRR). The remote and freelance work platform went public in summer 2019 at $21 per share, but the stock got drowned out in favor of faster-growing and higher-profile technology stocks. But this year, the pandemic hit, and freelance/gig work became all the rage. The spotlight turned squarely on Fiverr (much more so than its slower-growing and older peer, Upwork (UPWK)) and its ability to help companies hire flexible labor and navigate through the challenging coronavirus workplace.

Surely but quietly, Fiverr has enjoyed one of the most pronounced bull runs of any stock in the market this year. Since January, when Fiverr was trading at merely the low $20s, shares have gained nearly ninefold, making it difficult to believe that at least part of Fiverr’s rally is due to speculation and frenzied trading activity as it is fundamentals.

It’s not difficult to see why Fiverr is so favored at the moment (as seen above, the stock has traded in a nearly vertical line since the pandemic hit). I’ve followed rival Upwork all year, but Upwork – an older and clumsier company that was born out of a merger between two struggling freelance platforms called oDesk and eLance, has gained “only” 2x this year, trailing far behind Fiverr.

The disparity is made clear in Fiverr’s execution. Fiverr is not only growing revenue much faster than Upwork, but it also enjoys a richer take rate (the amount of money the company actually makes from hiring transactions conducted on its platform) and much better profitability.

The question investors have to ask themselves now, however: with Fiverr’s historic melt-up this year, is it wise to continue banking on a bull run? In my view, the answer is no, and valuation is the first indicator that we turn to in order to flesh out that question.

At Fiverr’s present share prices near $172, Fiverr trades at a whopping $6.16 billion market cap, about 3x the size of Upwork despite currently being at a smaller revenue scale. After netting off the $259.6 million of cash on Fiverr’s latest balance sheet against $4.0 million of debt, Fiverr’s enterprise value is $5.90 billion.

Wall Street already has a fairly aggressive revenue growth target for next year (FY21), with the consensus estimate of $246.3 million representing 37% y/y growth versus FY20 (despite a very tough comp in FY20, Wall Street is essentially expecting Fiverr to be able to return to its pre-pandemic growth rate of ~40% in FY21). Against this view of revenue, Fiverr trades at a vaunted 24.0x EV/FY21 revenue multiple.

There’s no arguing that Fiverr’s execution has been solid, especially of late (we’ll dive into the most recent trends in this article), but it’s very difficult to suggest there is substantial upside left and recommend a long-term hold in this stock at these nosebleed levels. In my view, a lot of Fiverr’s current strength is due to employers (small and large) scrambling to throw together contingency labor plans amid the coronavirus. Once the office landscape begins to normalize in FY21, I’m sure Fiverr will still remain highly relevant, but to expect the company to continue growing anywhere close to its current pace will be a tough ask.

The bottom line here: after seeing the stock gain ~9x year to date, the best move is to exercise caution around Fiverr.

Year to date performance has been splendid, but it’s priced into the stock already

The argument I’m trying to make is not that Fiverr has slipped up in any way fundamentally – but rather, that its very strong fundamentals have already been priced into its stock. After all, rival Upwork is only trading at a ~6x FY21 revenue multiple – though it’s true that Upwork’s ~20% revenue growth and its slimmer take rates (we’ll discuss that shortly) do merit a discount, I’m not sure the wide gap to Fiverr’s ~24x forward revenue multiple is fully warranted.

Take a look at Fiverr’s year-to-date performance below: 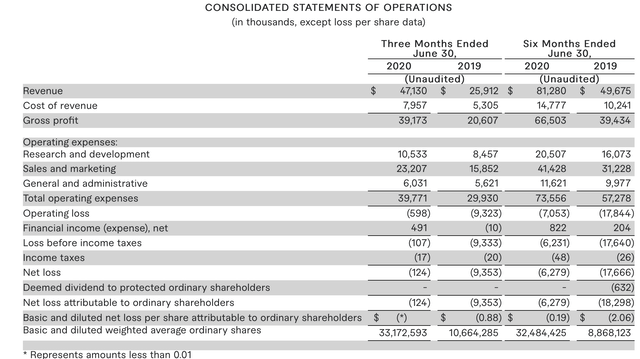 The coronavirus has certainly kicked Fiverr’s earnings into high gear. The company grew revenues at a blistering 82% y/y pace in Q2 to $47.1 million, versus a pre-pandemic baseline growth rate of roughly 40% y/y.

Fiverr describes its platform as “Service as a Product”, or SaaP (at this point, we’ve heard and grudgingly accepted almost every permutation of these popular tech acronyms). Its goal, laid out in its “investor 101” sheet, is “to create an on-demand, e-commerce-like experience that makes working with freelancers as easy as buying something on Amazon.

In exchange for this service, Fiverr takes a 5% service fee whenever a freelancer is hired on its platform. Fiverr also has a range of tertiary services – for example, prospective freelancers can sign up to participate in online courses that teach certain skills, usually in the ~$50 price range. This content is also supplied by third parties, and Fiverr takes a cut of these services as well.

Fiverr described Q2 as an “inflection point” in Fiverr’s history. In commenting on the recent trends on the Q2 earnings call, CEO Micha Kaufman noted as follows:

The outstanding Q2 results benefited from several strategies we have put in place. […] These efforts also resulted in a significant increase in brand searches, Fiverr’s share of voice and strong uplift in Fiverr’s brand awareness, which led to an 80% year over year increase in overall organic traffic. When COVID-19 hit, we quickly responded in several ways. We leaned in on performance marketing opportunities, investing more dollars with better ROI and marketing efficiency, and acquiring higher lifetime value buyers.

Strong trends of both organic and paid channels resulted in a record level of net adds of active buyers on our marketplace. We’ve also seen existing cohorts spending more during the past few months.”

And not only was Fiverr able to dramatically expand overall marketplace activity on its platform, but its take rate – the measure of how much revenue Fiverr actually generates as a percentage of GMV – expanded as well. As seen in the chart below, Fiverr’s trailing twelve-month take rate of 27.0% was 60bps higher than the year-ago period. This is also an area in which Fiverr shines over Upwork – thanks to its value-add revenue contributors like online courses, Fiverr’s take rate is much richer than the corresponding ~14% take rates at Upwork, which is a partial explanation to Fiverr’s rich valuation premium. 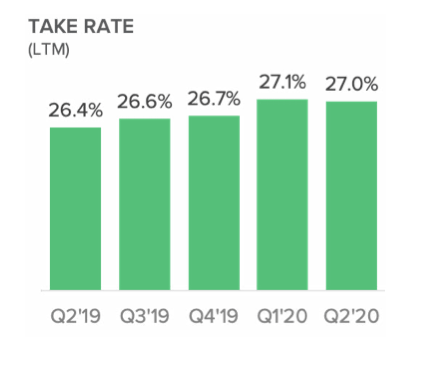 Looking ahead, Fiverr primarily plans to grow by making a move upmarket. At present, Fiverr is primarily used by single proprietors and small businesses to procure services (this is where Upwork may have the edge over Fiverr; as Upwork has cemented partnerships with the likes of Microsoft (MSFT) and General Electric (GE) to secure these mega-multinationals with contract labor).

Year to date, Fiverr has also been cash flow positive, generating $5.5 million of OCF in the first six months of this year versus a -$8.4 million loss in the corresponding period last year.

There’s little doubt that the pandemic has changed Fiverr’s growth trajectory, at least in the near term. But the question looming over us now is how much of that tailwind can bee sustained. Trading at ~24x next year’s revenues, Fiverr is essentially priced for perfect execution, years into the future. I fear that the relevance of this platform might fade into the background once the pandemic fades.

S&P 500 Talking Points We’re now just a week away from the election, and US equities kicked-off the week with a nasty sell-off. Are stocks readying for a major turn? It’s still too early to […]