US: Price volatility has remained elevated in the past week and has been gradually rising ahead of the US elections, depriving equities to reach to new highs. Interestingly, long-term interest rates in the US have continued to rise, with the 10Y yield up 15bps in the past month, leading to further steepening of the 2Y10Y or 5Y30Y yield curve. Interestingly, the US dollar has not responded to the rise in VIX in recent days, but the USD index is still standing far above its ST support of 91.75 reached in early September. As liquidity remains limited at the moment (Fed assets have remained steady at around 7tr dollars for the past four months), we think that the lack of momentum in the stock market will eventually result in lower fundamentals in the coming months. Figure 1 (left frame) shows that economic surprises indexes have co-moved strongly with US equities in the past few years, especially since the start of the year; however, most of the recovery since March has been related to the strong rebound in equities and therefore we would expect the negative trend in surveys and surprise indexes to continue as we enter the Winter Depression.

Euro: As expected, the situation keeps deteriorating in the Euro area, as Bloomberg’s proxy of the real-time economic activity is showing a fall in mobility, especially in Spain. We previously saw that even though some leading indicators such as the ZEW survey or the IFO business climate have rebounded sharply in recent months, our aggregate leading economic indicator for the Euro area is still standing at depressed levels and is not currently pricing in any signs of recovery. Hence, we think that banks will struggle in the coming months and we would not recommend going long financials in the current environment despite their cheap valuations.

UK: The British pound has remained resilient despite the increase in volatility in the past few days; however, it does not change our view on Sterling and we still think that GBP will remain vulnerable in the coming months as it is usually very sensitive to sudden volatility spikes. Economists are currently worried about the future of London status as the financial capital of the world; it is important to know that the UK economy was already showing some signs of weakness prior to the pandemic amid an over-leveraged financial system and the uncertainty associated to Brexit. We think that the UK will be one of the most impacted nations among the developed world, which should therefore gradually lead to a cheaper Sterling.

Net short specs on US Treasuries increased by 225K in the past two weeks to 569K contracts (in the week ended October 13th) amid a surge in net shorts on the 5Y. It is interesting to see that while investors seem to have given up on the 10Y short trade, interests to short the 5Y Treasury have constantly grown in the past few months.

The yield curve continues to gradually steepen as the 10Y term premium keeps rising; we expect the 2Y10Y to reach 1 percent within the next 6 months.

EUR/USD: The euro has remained strong against the US dollar despite the recent rise in price volatility and is currently trading in the middle of the 1.17 – 1.20, which represents the 38.2% and 23.6% Fibo retracement of the 1.0340 – 1.2550 LT range. Even though we remain bullish on the US dollar ahead of the US elections, we prefer to trade the euro against crosses such as the yen or the British pound in the current environment. It is important though to know that the ‘long euro trade’ is very crowded and therefore pressure on the downside could suddenly rise if a bullish USD trend kicks off. 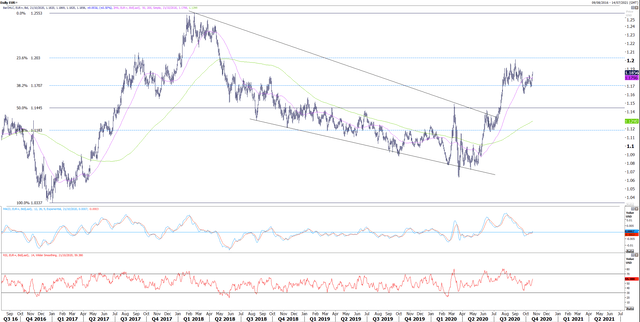 EUR/GBP: We like being long the euro against Sterling in this environment as we believe that the pound is the most vulnerable currency in the near term. The 100D SMA has been acted as a strong support in recent months, and we think that each ‘bear’ consolidation should be considered as a good opportunity to go long the pair. We went long at 0.9080 with a tight stop at 0.8970 and a target at 0.9250. 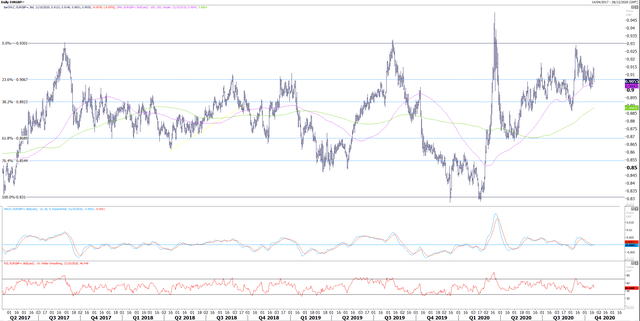 USD/JPY: The yen keeps appreciating as demand for risk off assets remains elevated as we approach the year end. Even though JPY has acted as the ultimate safe haven in periods of high uncertainty, we do think that the downside room on USD/JPY is very limited as the pair is currently approaching important support (100 level) and the BoJ may start to intervene in order to reverse the negative trend in the medium term.

AUD/JPY: The Aussie has also been depreciating against the yen in the past two months as the uncertainty may impact commodity currencies in the coming weeks (AUD, NZD and CAD). Traders who are bearish on equities could also short the AUD/JPY. The pair should continue to fall if the VIX remains high; next support on the downside stands at 72.80, which corresponds to the 200D SMA. 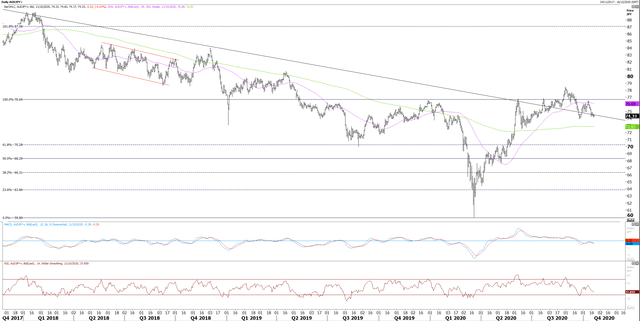 USD/CHF: We are still short the Swiss franc as we do think that the currency is significantly overvalued and therefore USD/CHF could experience a significant rally from here if demand for the dollar starts to accelerate in the last quarter of 2020.

Chart Of The Week

Even though Japanese equities have been in a bear market since their high reached in January 2018, which has been partly attributed to the yen strength due to the rise in global uncertainty, it is important to note that companies in Japan are cash rich. This chart shows that while a mere 14% of US companies are net cash, 53% of them are net cash in the Topix, which implies that non-financial companies in Japan are sitting on a massive amount of tangible assets (whereas it is merely 5 percent of the total market cap of US stocks).

In the past 25 years, Japanese companies have saved more than 500 trillion JPY by repaying debt and accumulating deposits and other cash-like assets, and currently hold twice more cash than in 2015. It will be interesting to see if investors will start to attribute more weight to these cash-rich companies in the near future. 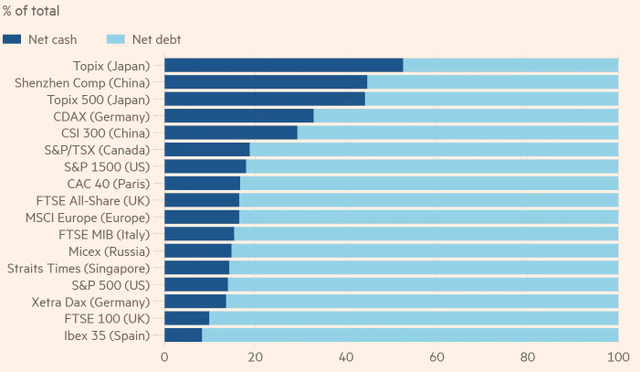 Even though the US dollar has remained weak in recent days as volatility has been rising, we are still bullish on the greenback ahead of the US elections as the surge in uncertainty will favor traditional safes such as the USD.

Disclosure: I am/we are long USDCHF. EURGBP. I wrote this article myself, and it expresses my own opinions. I am not receiving compensation for it (other than from Seeking Alpha). I have no business relationship with any company whose stock is mentioned in this article.

Market Stuck Near All-Time Highs Just a short note this week so that I can catch up on my “Turkey Induced Coma.” Despite three consecutive Monday announcements of “potential vaccines,” an agreement by President Trump […]