Euro trends are on the rise in currency markets, and the European Central Bank (ECB) might be at a crossroads with respect to where voting members stand on future implementation of economic stimulus programs. Since the second half of March 2020, all of this recent euro-buying activity in the market has helped produce gains of nearly 10% for the Invesco CurrencyShares Euro Trust ETF (NYSEARCA:FXE). However, these types of short-term gains can also have their consequences because rising currency valuations have made it much more difficult for European export companies to remain competitive in global markets. Ultimately, we believe the ECB might soon be in a position where voting members are forced to delay normalization in interest rate policy even in the event that consumer inflation levels surpass the central bank’s 2% target rate. As a result, rising market valuations in the Invesco CurrencyShares Euro Trust look unsustainable, and continued rallies should be considered a “sell” as we head into 2021.

Over the last three months, the FXE has generated inflows of 125.91 million. From the short-term trading perspective, this might make things look as though investor sentiment is strongly bullish in its calls for higher valuations in euro-denominated assets. However, these net flow figures quickly turn negative when we look at FXE from a longer-term perspective and recent economic data suggest that the fundamental backdrop remains bearish for the fund. 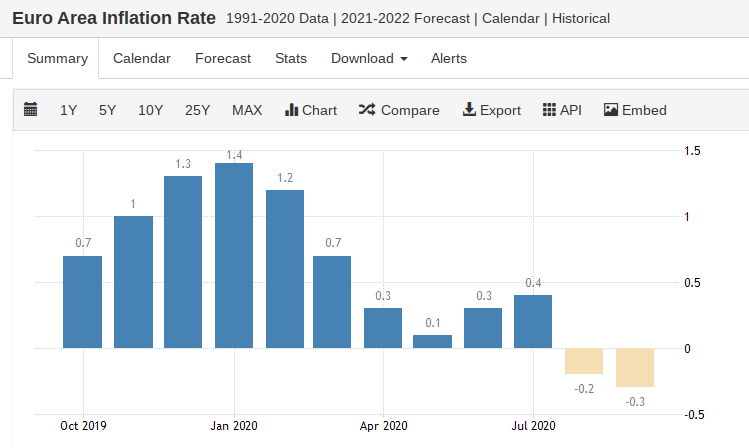 In September, preliminary estimates for consumer inflation in the eurozone showed a decline of 0.3% on an annualized basis, which is the sharpest drop since the middle of 2016 and worse than the analyst forecasts calling for a fall of 0.2%. Areas of weakness were found in energy prices (with substantial declines of 8.2%). However, consumer inflation in several key areas is expected to remain weak in the aftermath of the coronavirus pandemic, as prices for industrial goods (excluding energy products) showed a decline of 0.3%.

Price growth of 0.5% was still apparent within the services sector, but momentum has slowed from the previous reporting period (which indicated gains of 0.7%). If we were to exclude food and energy products from these calculations, we would be left with a core inflation rate of just 0.2%, and this is well below the European Central Bank’s target rate of 2%. However, the ECB recently announced plans to make changes in its inflation policy strategies, making it possible to adjust the previous inflation target in ways that might allow trends in consumer prices to extend beyond this 2% threshold. 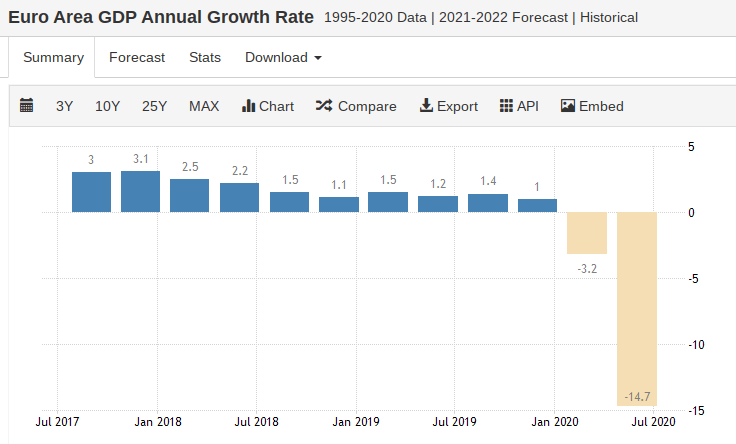 Another area of potential weakness can be found in the eurozone’s figures for GDP growth, which showed massive declines of 14.7% (on an annualized basis) in the market’s most recent readings. Of course, this contraction was actually less severe than expected, but the declines seen during the second-quarter period of 2020 are now the worst on record, and recessionary pressures are now visible in a number of different sectors. Investments declined by 21.1%, contractions of 15.9% became apparent in the household consumption figures, and significant changes are now expected for the eurozone’s import/export markets. 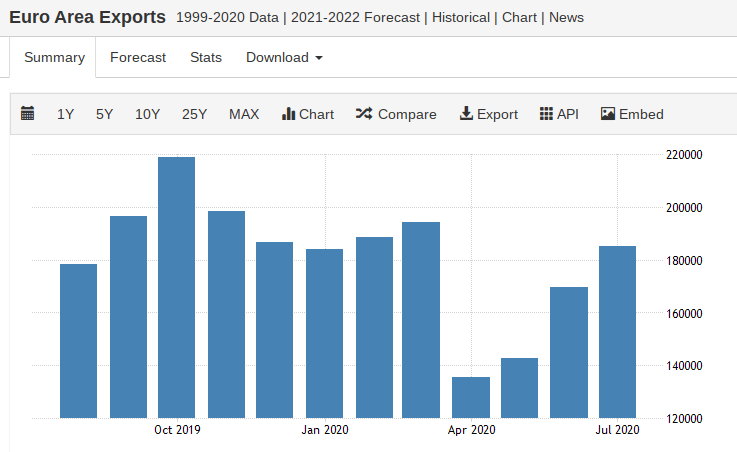 Eurozone exports have now fallen by 10.4% (on an annualized basis) at 185.2 billion euros (or $217.5 billion). Unfortunately, this indicates the fifth-straight period of decline, but this also shows that European export markets were in trouble even before the coronavirus pandemic reached surging levels. On the positive side, the region also experienced a significant decline in import figures, and this has helped the Eurozone see more problematic performances in its overall trade balance figures.

Going forward, this could be one of the most important factors for policymakers at the European Central Bank because rising currency values could make European companies less competitive in international markets. If the ECB ultimately decides to delay decisions to raise interest rates, currency valuations in the euro should remain weak, and this is a critical factor that could influence upcoming trends in the Invesco CurrencyShares Euro Trust as we head into 2021.

FXE has seen steady gains since the March 2020 trading period, and this bullish trend saw a mild downside correction near the end of June. After hitting resistance levels near the 113 handle, prices have started rolling over, and we have already fallen through short-term moving averages. The Invesco CurrencyShares Euro Trust now faces strong support levels near 107.80, and we will need to see a downside break in this area in order to say that the recent rally has completed.

So while trends in the euro have been on the rise in currency markets, there are several reasons to believe that this market move might soon reverse. If the ECB decides to delay normalization in interest rate policy even if consumer inflation levels exceed the 2% target rate, rising market valuations in the FXE are probably unsustainable, and any continued rallies should be considered a sell position as we head into 2021.

Thank you for reading. Now, it’s time to make your voice heard. Reader interaction is the most important part of the investment learning process. Comments are highly encouraged! We look forward to reading your viewpoints.

Gold (XAU/USD) Analysis, Price and Chart The US dollar’s reaction to the election will drive the precious metal. US real yields are becoming less negative, a bearish signal for gold. Retail traders remain heavily long […]