Headquartered in Los Angeles, California, Hope Bancorp, Inc. (HOPE) is a $17.2 billion asset holding company and parent to Bank of Hope. Interestingly enough, HOPE is actually the only large scale community bank that is Korean-American focused. It has a pretty diverse lending set with a clear emphasis on commercial real estate and SBA lending. It has offices all over the United States; more specifically branches are located in Alabama, California, Georgia Illinois, New Jersey, New York, Texas, Virginia, and Washington State, along with having an office in Seoul, South Korea.

I completely understand why HOPE trades at a discount to peer banks given its past credit problems. Most peer mid-size community banks are trading at 1.1x price to tangible book value per share. As one can see from the chart below, HOPE currently trades at a 40% discount to that. My bullish stance on the shares is based on the current valuation being too low relative to peers.

Fundamentally, I believe HOPE has appropriately built up its loan loss reserve enough to warrant a roughly peer like valuation. I think the credit profile does give people caution, which I understand. However, my argument is that HOPE has already positioned itself to sustain above average losses. In my mind, the share price should be much closer to peers.

The second-quarter spread revenue came in at $109.8 million, marking a roughly $10 million decrease relative to the first quarter. Based on my analysis, I found that the net interest margin (NIM) accounted for the entirety of the linked quarter decrease. The second quarter reported NIM was 2.79% relative to the first quarter’s 3.31% margin. Total loans increased $275 million while deposits increased $1.3 billion.

The substantial 52 basis point drop in the margin was caused by a multitude of things. First, and the most sizable reason, the average loan yield dropped to 4.23% in the second quarter from 5.06% in the first quarter. Partially mitigating the painful loan yield reduction was the cost of interest bearing deposits, which fell more than 47 basis points over the same linked quarter period. While it’s difficult to see the effects during the most recent fed fund rate reduction, but HOPE has tried to re-mix its funding base into lower yielding liabilities. I believe these effort are likely to help the NIM going forward.

The second-quarter fee income came in at $11.2 million. While slightly lower than the $13.3 million seen in the first quarter, total non-interest income was impacted by the negative effects of limited service fees. Also, gain on sale of loan was down a little, but that can be volatile for any one given quarter. 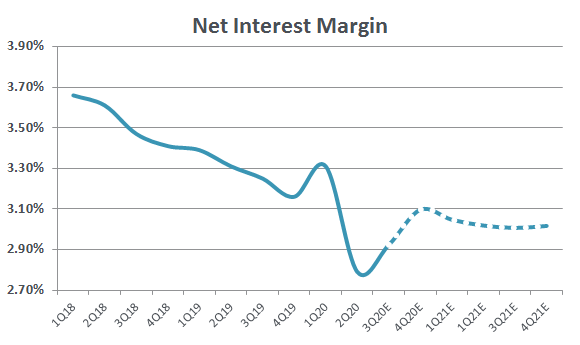 Based on my analysis of the balance sheet, I am expecting the margin to expand a little from second-quarter levels. The second quarter had a pretty tremendous deposit build that just sat in cash. Even if management placed the entire thing into the 10-year treasury bonds, it would substantially help the margin and draw down some excess liquidity. From there I am expecting the fourth-quarter margin to improve off of third-quarter results due to PPP loan forgiveness.

As we work our way into 2021, I am expecting the margin to be relatively flat off of fourth-quarter levels. HOPE is a pretty asset sensitive bank, and I think the entire earnings assets portfolio is likely to have repriced by year-end. I believe the current valuation is assuming these trough-like NIM levels to continue for the foreseeable future. If the margin does report better than expected results and shows linked quarter improvement, I believe the shares are likely to trade higher after earnings.

Also, I think overall fee income is likely to work higher as we finish out the year. Even though it only makes up about 10% of the total revenue, I am expecting it to drift higher and get back to pre-COVID levels by the beginning of 2021.

A Dive Into Credit

When looking at the chart below, one can quickly understand that HOPE had a very difficult time during the last economic downturn. While most banks were seeing net charge-offs (NCOs) peak near 200 basis points, HOPE nearly doubled that amount at its darkest period of time.

However, and most importantly in my mind, from 2016 to today, the overall NCOs have been almost nonexistent. During the second quarter, NCOs were just $0.65 million, or less than 0.02% of the entire loan portfolio. Even the first quarter, which was relatively high when compared to the past couple of years, was just $3.4 million, or 0.11% of average loans. 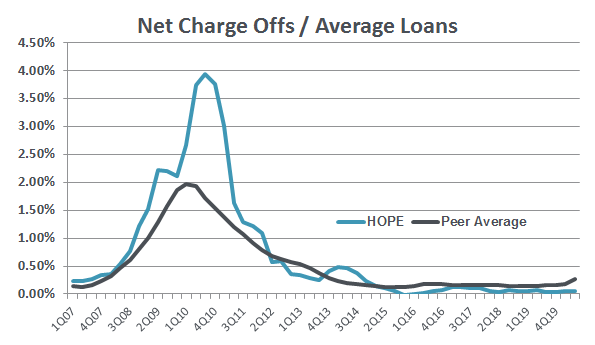 Given what has transpired over the past couple months, credit soundness should be the number one thing investors should be looking to find. If a bank does have a solid track record and today’s credit profile continues to look strong, it makes checking the box pretty easy.

In HOPE’s case, the overall profile looks good today, but the bank has an underwhelming history with regard to NCOs. At the end of the second quarter, HOPE’s loan loss reserve stood at 1.26% of total loans. While I would have liked to this to be higher, I think the current rate is acceptable given the sizable reduction in criticized loans. 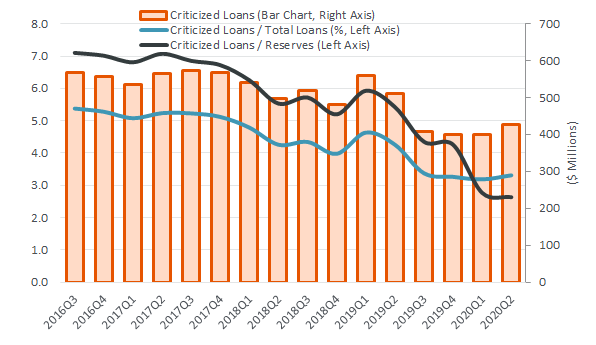 While I am under the assumption that the third-quarter results are likely to prove limited NCOs, I think management will likely continue to have an elevated provision. This elevated provision will add to the reserve level and further support the bank’s credit soundness.

First off, I completely understand why the stock is trading at a much lower valuation than peer banks. While the recent credit trends should be reassuring to investors, the economic highs and lows were not experienced during that time frame. It’s difficult to change a credit culture at a bank; however, I fundamentally believe that HOPE has turned the page on its poor underwriting credit history.

While the bank might not perform better than peers in terms of credit pain, even if it has an “average” credit experience, the average bank peer is currently trading near 1.1x price to tangible book value per share. In my mind, starting with the third-quarter earnings release, if HOPE continues to prove limited NCOs, it should start to trade higher. Concurrently, if management does add to the reserve, it should give investors confidence to reenter the stock.

However, if NCOs do increase slightly, I don’t think the bank has much downside left in the stock. The current valuation assumes material deterioration in the tangible book value per share, which I find very unlikely to happen.

Gold (XAU/USD) Analysis, Price and Chart The US dollar’s reaction to the election will drive the precious metal. US real yields are becoming less negative, a bearish signal for gold. Retail traders remain heavily long […]