The upcoming presidential election has dominated the 24-hour news cycle. However, the knock on effects of COVID-19 still linger, and the economy could face headwinds even after a vaccine emerges. That could be foreboding for cyclical names like Kansas City Southern (KSU). The company reported Q3 revenue of $659.6 million, non-GAAP EPS of $1.96 and GAAP EPS of $2.91. The company missed on revenue, but beat on earnings. KSU is down in the low single-digit percentage range post earnings. 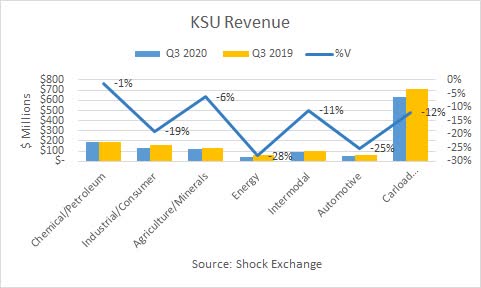 Chemicals/Petroleum revenue fell 1% on a 5% increase in carloads and 6% decline n ASP. The segment has benefited from volume related to energy reform and plastics. If Mexico’s economy does not gain traction long term then it could jeopardize a major catalyst for the company. Chemicals/Petroleum represents 31% of total revenue, up from 27% in the year earlier period.

Total carloads fell 4% Y/Y. Total industry rail traffic for the first 43 weeks of the year was down about 10%, which implies KSU’s Q3 rail traffic was better than the industry’s full-year performance. 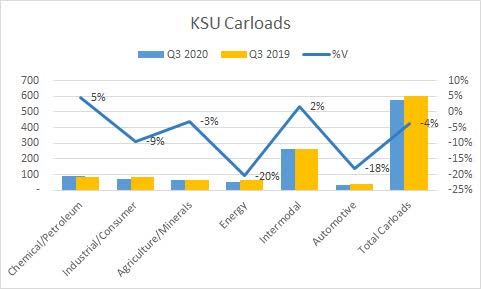 Chemicals/Petroleum volume rose 5% on a recovery in refined fuel product shipments to Mexico. Energy volume fell 20% due lower shipments for frac sand amid weak oil prices. Automotive volume fell 18% due to lower automotive production, which was hurt by COVID-19. However, Automotive volume more than doubled sequentially, implying the segment could be heading for a rebound.

Last year KSU was known for its pricing power. In Q2 ASP fell in the high-single-digit percentage range. 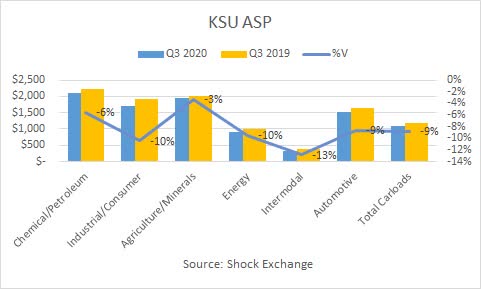 The headline story for this quarter is clearly operating ratio, and more specifically our ability to hold the PSR driven efficiency improvements and cost savings generated over the prior year and a half, as our volumes and revenues experience a truly unprecedented roller coaster ride, with the steep decline in the second quarter and then the very sharp recovery in growth during the third quarter.

KSU reported an operating ratio of 58%, a marked improvement over that of the prior year period. The company had been reporting operating ratios in the low-to-mid-60 percent range. While CSX (CSX) an Union Pacific (UNP) have delivered operating ratios sub-60%, I had not expected KSU to get there.

The fallout was that EBITDA of $361 million fell 5% Y/Y. EBITDA margin was 55%, up 400 basis points versus that of the year earlier period. Results for Q3 was a big achievement for KSU pursuant to efficiency. It now can be considered as best-in-class alongside the Canadian railroads. Cost take-outs and its shipments to Mexico could further differentiate KSU from U.S. competitors.

KSU has an enterprise value of $19.5 billion and trades at 13.9x EBITDA. The company was previously the subject of takeover rumors pursuant to Blackstone (BX) and Global Infrastructure Partners, yet KSU decided to go it alone. While KSU is proving itself to be one of the better railroads pursuant to earnings growth, the company will likely face headwinds until the economy reopens. Even before the pandemic, industry railroad traffic was slowing and global economic expansion appeared to be long in the tooth. If the global economy has seen its best days then railroads and KSU could find it difficult to deliver consistent growth. I do not believe the valuation reflects these challenges.

KSU is up over 15% Y/Y, despite the pandemic. Some of its rise could be due to optimism over a vaccine emerging or monetary stimulus from policymakers. Given potential headwinds, the stock remains a sell.

I also run the Shocking The Street investment service as part of the Seeking Alpha Marketplace. You will get access to exclusive ideas from Shocking The Street, and stay abreast of opportunities months before the market becomes aware of them. I am currently offering a two-week free trial period for subscribers to enjoy. Check out the service and find out first-hand why other subscribers appear to be two steps ahead of the market.

Pricing for Shocking The Street is $35 per month. Those who sign up for the yearly plan will enjoy a price of $280 per year – a 33% discount.

Knowing how to control emotions while trading can prove to be the difference between success and failure. Your mental state has a significant impact on the decisions you make, particularly if you are new to […]