After leaving Bay Street, I lived on a beach in Southeast Asia for the better part of 2 years. It was there that I was introduced to the term “second wave”, which related to an alarmingly large bit of the ocean that crashed into you while you were still recovering from a first wave. The “second wave” in that context was often more stressful than the first because it was impossible to prepare for the shock of it. It’s quite possible that these ocean waves are decent metaphors for our current circumstance. The future is more uncertain now than at many times in the past. It’s also fair to say that in some ways the world is less well prepared to deal with a second wave than it was to deal with the first wave. With that as a backdrop, a reasonable person could be forgiven for assuming that current valuations make no sense. An investor can expect higher valuations when people expect rapid future profit growth. In a world that increasingly depends on fiscal stimulus, that profit growth is nowhere to be seen.

It’s been very well argued that the risk premium is not out of whack, given the paltry returns from treasury bills and the like. At the same time, though, at least a treasury bill can offer a positive nominal return. The same can’t be said for stock investors who buy a 1.5% yield while taking on the risk of significant capital loss.

With all of that as backdrop, I’d like to revisit my analysis of Lancaster Colony Corporation (LANC). This past April, I recommended that investors eschew the shares, while recommending selling deep out of the money puts. Since then, the shares are up about 39% against a gain of 31% for the S&P 500. Much has happened since, then, obviously, so I thought I’d check in on the name to see if it’s worth buying now.

I know how painful my writing can be, dear readers, and for that reason, I’ll spare you the pain of wading through my insane ramblings and I’ll come right to the point. For those of you who missed both the title of this article and the bullet points above, I think this is a fine, recession resistant business. The problem is that investor’s returns are largely a function of the price paid and the stock price is too high in my estimation. I think this company deserves to trade at some kind of a premium, but not the all-time high it’s trading for at the moment. While I don’t think history necessarily repeats, it can rhyme on occasion. The last time the shares were near this valuation, they went on to perform poorly. That was at a time before the world was struck by a virus about which we remain fairly ignorant. Also problematic for me is the fact that the options market no longer offers reasonable premia, so like everyone else, we’re forced to just wait for the price to drop. I’ll go through my reasoning below by looking at the dividend, and the stock as a thing distinct from the underlying business.

Some people who are much more optimistic than me (i.e. most of humanity) will point out that the financial performance here has been great because the company managed to grow sales in the teeth of the pandemic induced recession. I would remind such people that investors are compensated by what’s left over after paying expenses, so revenue is less relevant than profits. Profits dropped by about 9% from 2019 to 2020 in spite of a 2% uptick in revenue. The most obvious cause is the fact that SG&A expenses rose by just under 21%. In addition, there was a swing in contingent consideration from $-16 million (good for the company) to $257,000. On the bright side, the company managed to reduce COGS by about ½%, which drove gross profit by about 9.75%. None of this is particularly worrying in my estimation, though. The company remains reasonably profitable, and I think many of the “problems” we saw in the most recent period are temporary in nature. In my opinion, the dividend is much more interesting.

As I’ve written often, I’m as much of a fan of accrual accounting as it’s possible for a (slightly) sane person can be. When it comes to dividend sustainability, though, I think cash is king. In order to try to work out whether the dividend is sustainable or not, I want to compare the size and timing of future cash obligations and compare those to the company’s current and likely future cash resources. In support of this effort, I’ve compiled the size and timing of the company’s future cash requirements in the following table for your enjoyment and edification, dear readers. You’re welcome. You may be wondering why I haven’t included long-term debt as I usually do when looking at dividend sustainability.

In March of this year, the company entered into a new unsecured revolving credit facility in the amount of up to $150 million, with the potential to expand the facility to $225 million based on the consent of the issuing banks. This facility expires in March of 2025. At the end of June of this year, the company had $2.8 million drawn against this, so I consider their long term debt to be non-material. I should also write something about capital expenditure. I consider this to be an essential investment in the business, which is why I’ve included it. I came to the figure of $75 million annually for this figure because that’s the midpoint of the company’s forecast CAPEX expense per page 23 of the latest 10-K.

Against these obligations, the company has cash on hand of just over $198 million. This is about 7.5 times the size of the company’s obligations. In addition, the company has generated an average cash from operations of ~$176 million over the past three years. This is one of the most solvent companies I’ve reviewed, and therefore I consider the dividend to be the definition of “safe.” 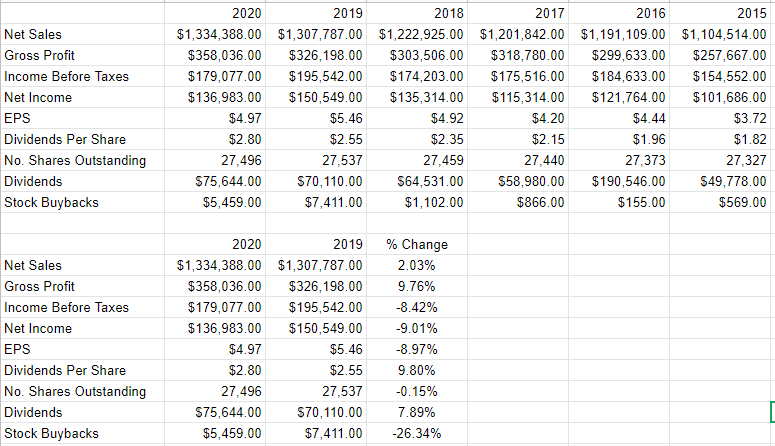 Thus, I’d be more than happy to buy these shares, and receive these very well covered dividends at the right price.

Welcome to the part of the article where I engage in Sisyphean task of trying to convince some investors that a great company is not worth any price. Yes, dear readers, there is a connection between the price you pay for a wonderful business and the returns you enjoy from that business. Specifically, the less you pay for a stream of future cash flows, the higher will be your returns. Thus, I want to only ever buy shares that are relatively cheap. As my regular readers know, I judge cheap or not in a few ways. First, I look at the ratio of price to some measure of economic value, like earnings, free cash flow, and the like.

Per the chart below, the shares are about 49% more expensive than they were when I last wrote about this business. It’s also worth noting that the shares are trading near record high valuation. Finally, in case it’s not obvious, the last time the shares were trading near this level (late 2018-early 2019), they went on to underperform. This should convince investors that even an investment in this wonderful business can lose money.

In addition to looking at the simple ratio of price to some measure of value, I like to try to understand what assumptions the market is currently making about a given company. In order to do this, I turn to the work of Professor Stephen Penman and his book “Accounting for Value.” In this book, Penman walks investors through how they can isolate the “g” (growth) variable in a standard finance formula to work out what the market must be assuming about long term growth at a given price. At the moment, the market seems to be forecasting a growth rate of just under 8% for Lancaster. I consider this to be a massively optimistic forecast, and for that reason I can’t recommend buying at the moment.

Just because I consider the shares to be expensive at the moment, doesn’t mean there’s no value here, obviously. After all, I did just drone on quite a bit about how solvent this company is and how well covered is the dividend. So, I’d be very happy to own this business at the right price.

For instance, in my previous article, I recommended investors sell the September Lancaster Colony puts with a strike of $105. These were bid-asked at the time between $4.90-$6.30 and they expired worthless, which is a reasonably good outcome. I didn’t make the same return as someone who ignored my advice and bought shares, but I certainly didn’t take on the same risk either. The reason for this is that had I been exercised, my net purchase price would have been over 25% lower than the then market price.

The problem we face with Lancaster Colony puts is one I’ve seen repeatedly recently. Namely, the premia on offer for reasonable strike prices is basically nil. For example, the March 2021 puts with a strike of $130 are bid-asked at only $2.30-3.10 at the moment. If the investor is exercised, this would be the price at which I eschewed the shares earlier. Thus, I can’t recommend any specific short put trade at the moment. In my view, we happy few investors who like selling puts must wait on the sidelines with everyone else. This is a relatively unpleasant position to be in, but I’d rather lose opportunity than capital, so I will wait.

I think this is a very well run business, with a dividend that is one of the most sustainable I’ve written about. Also, management seems particularly adept at acquisitions, and these have worked out well for shareholders. The problem is that all of the positives are very well known by the crowd and have been priced into the shares. Thus, I suspect there’s little upside from these levels. It’s also worth noting that the multiple has increased dramatically in spite of the fact that the level of uncertainty has increased markedly. For that reason, I must recommend that investors save their capital here, and wait for a more attractive entry price. As I’ve said repeatedly over the years, there can be a disconnect between price and value for some time, but sooner or later they’ll meet. I think investors would be wise to avoid these shares until price falls to match value.

© Reuters. Denmark stocks lower at close of trade; OMX Copenhagen 20 down 0.85% Investing.com – Denmark stocks were lower after the close on Thursday, as losses in the , and sectors led shares lower. […]