COVID has pushed a significant portion of the US economy to Work-From-Home (WFH) status being a permanent thing. This has driven a great number of businesses into cloud-based computing to accommodate these workers. Microsoft (MSFT), one of the industry’s leaders in the Cloud industry, saw significant increases in their Cloud computing systems, Azure; this was reported in their July earnings. That was during the infancy of the virus. Now, with the upcoming earnings just days away, my expectation is that more companies will have made a more significant push into Cloud services. I expect that this will show in this upcoming earnings and I am predicting a surprise to the upside with Microsoft’s earnings, and a push upwards in their stock price.

Here is a look at the recent stock price movement over the past year:

Like many companies, MSFT rose sharply after the initial COVID-fueled sell-off in March. The company’s stock has since not only recovered its levels from prior to the sell-off, but eclipsed these levels.

However, I could see a stall in the market at this lofty level. The broader market has moved up sharply over the past few days and since has stumbled slightly. Going into the presidential election, I would expect some volatility as there is uncertainty. This may pressure stocks and from that, MSFT may move lower.

In the meantime, however, the earnings release will present some interesting news as to how Microsoft is leading the way in transitioning the world’s economies to Work-From-Home, and from that how they are increasing their revenue.

High-ranking individuals in the industry have stated that they feel the Total Addressable Market (TAM) is some $3.7T. Amy Hood, Microsoft’s Chief Financial Officer, at the Deutsche Bank Technology Conference stated that she continues to see it growing more and more, while AWS CEO Andy Jassy states that research indicates that the “TAM is $3.7T and that 97% of this market is still on premise,” meaning 97% of TAM is still being done by companies themselves. Given that, there is an astounding amount of growth potential with these companies in this segment of the industry.

Since the industry is largely still ramping up, increases are quite large on a YoY basis as companies move operations to Cloud computing.

Here is a look at the YoY growth rate of Azure over the past two years, quarter-by-quarter:

My expectation is that over time, as more and more businesses switch to cloud computing, these very high YoY increases will move lower and lower. For now, the low-lying fruit is being picked as companies start migrating. For now, only 3% of this ~$3.7T TAM has made this switch. That is a small amount with a lot to go.

Here is a slide showing the revenue for the last quarter, Q4 2020:

As you can see, all areas increased in growth in their respective revenues. But, it is the Cloud that is the winner, albeit Personal Computing has a respectable addition to the revenue increase.

According to the company, via GeekWire:

The COVID-19 pandemic and related stay-at-home orders boosted the company’s productivity, cloud and gaming businesses, including subscription versions of Microsoft Office, and the Microsoft Azure cloud platform. Revenue from Xbox content and services was up 64% for the quarter.

From a visual standpoint, you can see the effect of the increases in revenue for Azure in this chart: 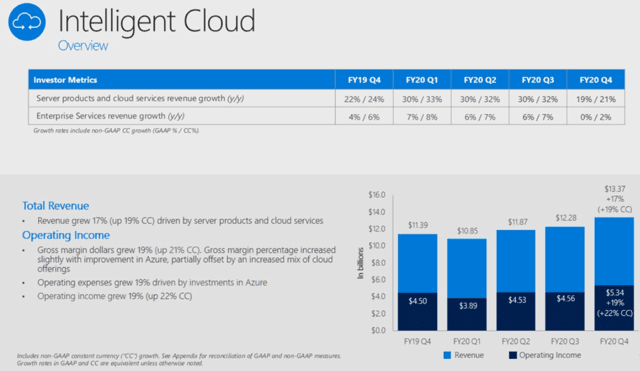 It is this continued growth that I see pushing revenues higher for Microsoft. There is a substantial push into WFM by companies as social distancing is now the norm. Over the past few months, offices have largely laid bare as individuals do their work from elsewhere. At the same time, individuals are not only not working in crowded offices, but are leaving cities en masse. In order to support this, companies need an infrastructure for their employees to work together on projects while being remote from each other. This is one of the keys to Cloud computing and Azure: The ability to house all of a company’s data and the ability for many individuals throughout any part of the world to access this data and cohesively streamline projects using that data. That is what the cloud does; that is what Azure does.

Even though I like this trade idea, I am leery on a few specific issues: the election, the lack of Congress passing new legislation and recent COVID spikes. As I have mentioned, there has been some selling in the markets lately. Opening a position at this time poses downside risks with volatility. The lack of Congress putting together another stimulus bill before the election may also weigh on broader sentiment, potentially driving down MSFT. And yet another variable is the election itself, which is a potential game-changer that may surprise the market. It may be that while we get closer and closer to the election itself there is a lot of jitters as positions are jostled in and out.

At the same time, there have been a number of reports of large spikes in COVID cases in Europe and elsewhere. This may weigh heavily on the broader market, affecting any positions going into Microsoft’s earnings.

Even though I may be bullish on this concept of Microsoft’s revenue being driven by the virus, these variables may bring in a lot of volatility that may make entering a position risky; this should be a serious consideration.

There is a tremendous amount of growth potential in the Cloud business. The current Work-From-Home drive will accelerate companies into cloud computing, and specifically, Azure. If the industry really is only at 3% potential, as industry heavyweights posit, then the amount of potential revenue for Microsoft is enormous. The fact that the WFH drive will accelerate companies into cloud computing leads me to believe that Microsoft, via its Azure business, will see greater than expected revenue at its next earnings release.

It is because of these reasons I am bullish on MSFT. However, and as I have mentioned, I am leery of the potential volatility at the present moment; personally, I have been waiting until after the election to enter new positions. But, this Microsoft trade is tempting. At this time, I remain on the sidelines but will evaluate the market prior to the earnings release for a potential long position.

Additional disclosure: I may place a long position on this stock just prior to earnings release.