Welcome to the idea edition of Oil Markets Daily!

That’s an investment adage that’s attributed to commodity/cyclical businesses, and this applies to refineries as well. Because of COVID-19 and the forced shutdown initiated by governments worldwide, refineries have been hit especially hard. This makes sense since oil demand is reflected via the end-consumer demand of products, and if no one is using it, then product storages build and push refining margins down.

A good illustration of this is the US refining margin tracker used by Energy Aspects:

Now, similar to the crude futures curve, the curve is not to be used as a predictor of future oil prices, but rather the current fundamentals projected out forward without assuming any material changes. So, if oil demand recovers or product storages start to draw, then these refining margins will move up as a result.

This step is called capacity rationalization. In essence, it’s similar to what we see on the producer side. Simple refineries that can’t control the type of products they produce and are at the whims of massive fluctuations in margins will be the first to shut down. A good example of this is a complex refinery in Asia that’s able to process heavier crude (cheaper input cost) while producing more profitable products like distillate and jet fuel (not during COVID-19, but during normal times). While a simple refinery will be subjected to the normal processing limitations of each crude blend they buy. See this great explanation here. 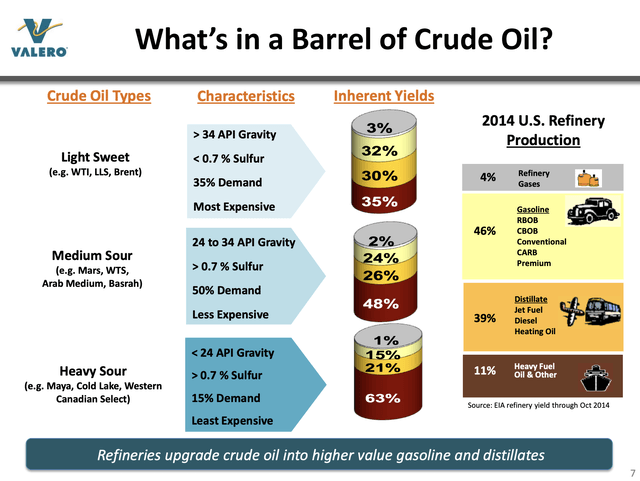 Another way to think about this is that a simple refinery is a high-cost producer of refining products, and complex refineries are lower-cost producers.

Now, capacity rationalization is happening on scale already. Refineries are fixed cost beasts, so if they don’t increase utilization, they are bleeding cash. Now, if you combine this with negative margins in certain regions, you can see how refining capacity will be shuttered in the coming months.

Most of the capacity that will be taken offline will be in the likes of North America and Europe where older more outdated refineries can’t compete with the newer projects in Asia. Marathon Petroleum (NYSE:MPC), for example, has already shuttered its Martinez refineries in Contra Costa Country with a capacity of ~166k b/d.

These closures will have a permanent impact on refining capacity in North America and Europe; because of environmental regulations, outside of existing capacity expanding, there will never be a new refinery built. (Alberta is currently building one, but it’s such a mess that it’s still not even fully operational.)

Phillips 66 has a moat

Phillips 66 (PSX) runs complex refineries that can handle heavier quality crude while controlling the types of products it wants to produce to maximize margins. In essence, you can think of this as a competitive advantage in the refining business, but the downside is that there’s higher maintenance capex associated with it, which PSX estimates to be about ~$1 billion a year.

What really sets PSX apart is the midstream assets it owns to help support its refining side. For refineries, you can control margins to an extent via two variables:

By owning a lot of midstream assets, PSX can source crude cheaper than other producers. 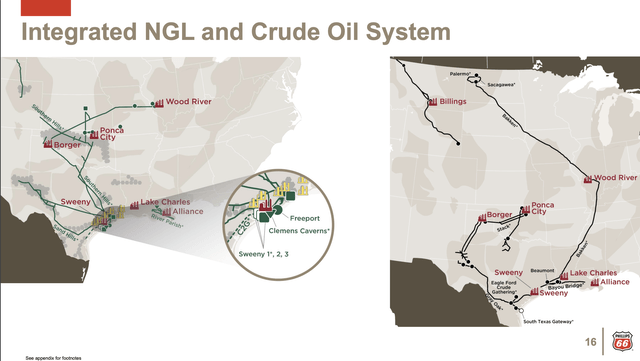 Here’s an illustration of how a complex refinery can turn heavier crude into higher-margin products: 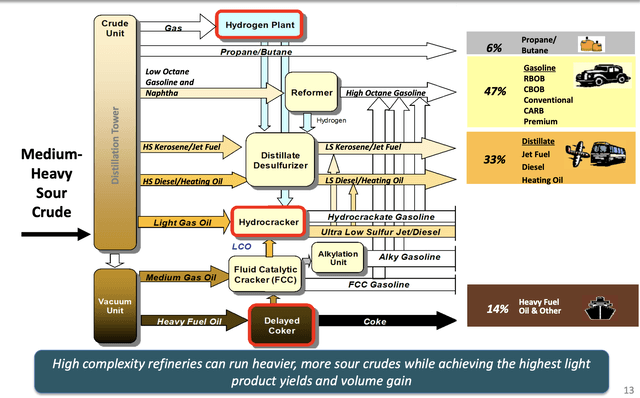 Note that heavier crude going through a simple refinery will yield only 15% gasoline, while a complex refinery increases the yield to 47%.

Now, if you notice in the midstream asset chart above, PSX has a line going all the way to the North to source Canadian heavy oil. In some ways, PSX’s advantage in sourcing cheaper crude is the result of the Canadian government’s inability to increase pipeline takeaway capacity, but even assuming excess capacity, Canadian crude is landlocked, which means there will always be a small pricing advantage for those that can get those heavier barrels.

This price differential on the cost front gives PSX a long-term competitive advantage over other refineries.

And although we are very long heavy oil producers in Canada and we think the WCS-WTI spread can narrow into the single digits, that still gives PSX a better pricing structure than other refineries. 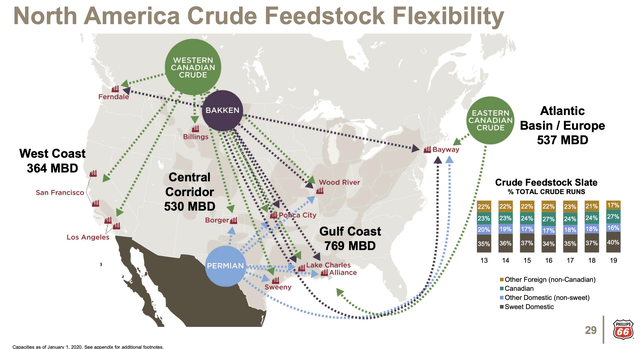 As you can see in the chart above, PSX breaks down where it sources all of its crudes. And the cheaper crude source gives PSX top quartile cost efficiencies. 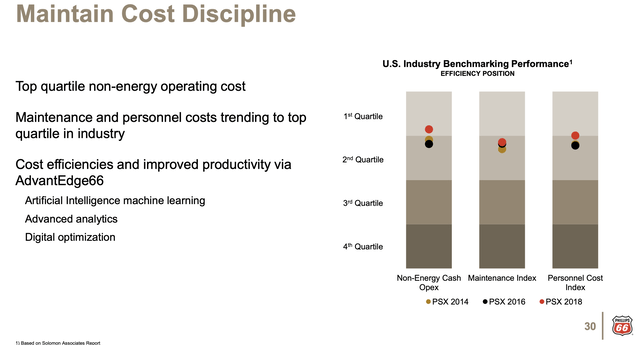 In addition to PSX’s refining segment, its Petrochemical segment is often underappreciated. 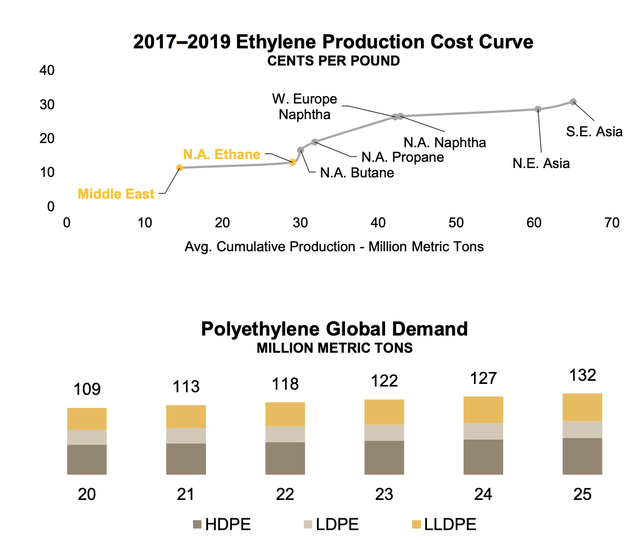 When people think about oil, they only think about the gasoline segment, which is a smaller segment of the market than people think. Petrochemical will be the bigger driver going forward with polyethylene demand set to move higher by ~21% by 2025.

For those of you that don’t know what polyethylene does, see this (hint: plastic, rubber).

This segment for PSX generated adjusted EBITDA of $1.5 billion, while capex/investment totaled only $0.4 billion. (Note: segment is 50/50 split between Chevron (NYSE:CVX) and PSX) 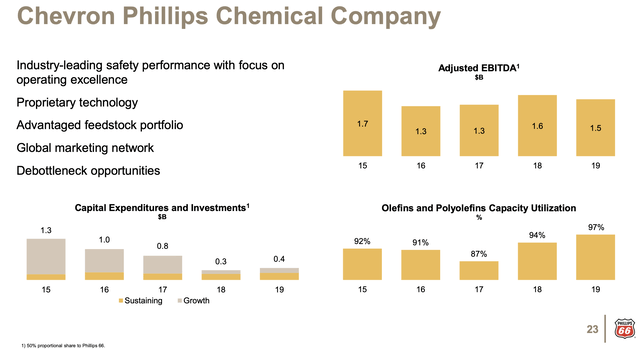 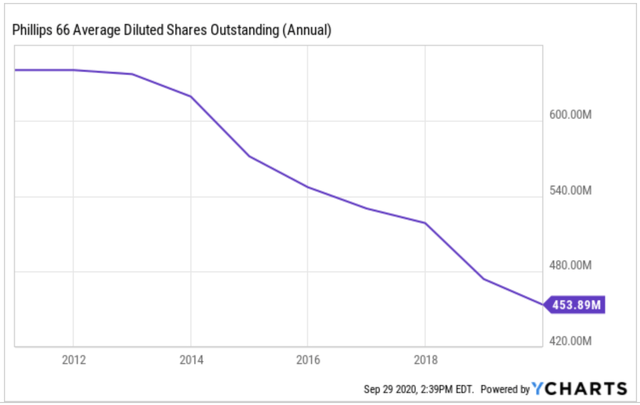 Over the course of the last 8 years, PSX has bought back ~33% of its shares outstanding while paying a total of $26 billion to shareholders via dividends.

Given our macro outlook on oil and the energy markets in general, the current price drop is not justified if PSX follows the same capital allocation policy going forward. Not only will shareholders get a greater portion of future dividends, but the pie will keep on shrinking (e.g. even smaller share count).

It’s foolish to suggest this capital allocator will do anything else but to make shareholders more money going forward with its fortified moat.

Our specialized focus on energy allows us to see just exactly what types of companies have a real durable competitive advantage. We have stayed away from larger-cap names in the past like PSX due to valuation issues (now trading at 11x FCF trough cycle). But the recent indiscriminate selling in energy stocks has made these names extremely compelling. This is especially true when you look at a name like PSX paying a sustainable dividend yield of ~7%, all the while demonstrated a long track record of returning free cash flow back to shareholders via enormous share buyback programs. There’s nothing to suggest this share cannibalizer will do anything different going forward.

In the near term, the refining sector is challenged due to COVID-19 demand issues, but capacity rationalization and the closure of higher cost refineries will only benefit names like PSX even more in the future. Once demand normalizes, we see names like PSX benefiting greatly.

For energy investors, the 2014-2020 bear market has been incredibly brutal. But as the old adage goes, “Low commodity prices cure low commodity prices.” Our deep understanding of US shale and other oil market fundamentals leads us to believe that we are finally entering a multi-year bull market. Investors should take advantage of the incoming trend and be positioned in real assets like precious metals and energy stocks. If you are interested, we can help! We are now offering a 2-week free trial, so come and see for yourself!

Disclosure: I am/we are long PSX. I wrote this article myself, and it expresses my own opinions. I am not receiving compensation for it (other than from Seeking Alpha). I have no business relationship with any company whose stock is mentioned in this article.