After two sets of revisions, the headline growth rate for Q2 sits at -31.4%, of course an all-time record. We have another record coming for Q3, but in the other direction. Estimates are anywhere from 20-36%.

But these are annualized QoQ numbers. Normally, annualizing is very helpful because it allows us to quickly compare MoM, QoQ and YoY growth rates on the same scale. But when the growth rates get big, it is very distortionary. Annualizing a rate means taking the growth rate, and then compounding it over a year. When the QoQ numbers are in the range of 0.5% to 1% like they are normally, this doesn’t make much of a difference. But when they get larger, so do the distortions:

So what -31.4% annualized growth in Q2 actually means is that real GDP levels were down 9% QoQ. If real GDP grows by 36% annualized as the GDPNow algorithm is predicting, that means a bounce of 8.0% over Q2 levels. Putting it all together, this is what that actually means: 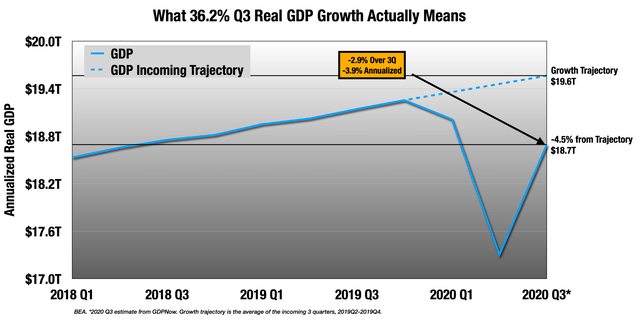 To put that -2.9% over 3 quarters in context, that would be historically one of the worst ever. 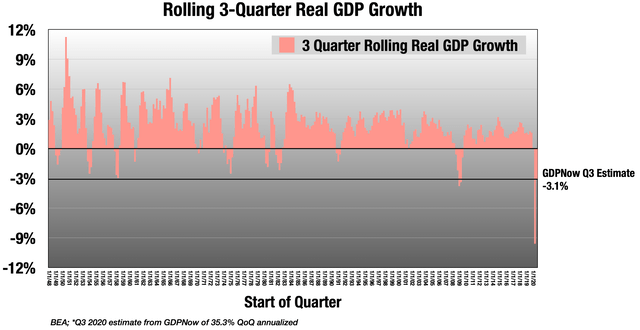 So 36% sounds great, and frankly better than I expected by this point because of the massive fiscal support, but the reality is far grimmer.

GDPNow is a “bottom up” GDP estimate that comes from the Atlanta Fed. It has consistently estimated a higher Q3 growth rate than the “top down” blue chip consensus. 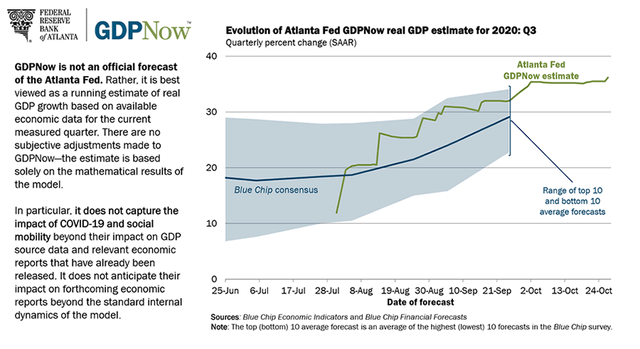 So mostly why I am using it is that it is a pretty high estimate in the scope of things. But another advantage is that it is just an algorithm with no human intervention. As new data from the quarter comes in, the model assumes the rest of the quarter will look the same as it does as of that date. It puts it through the BEA preliminary GDP algorithm and spits out a number. So we also get the basic splits of GDP components as well: 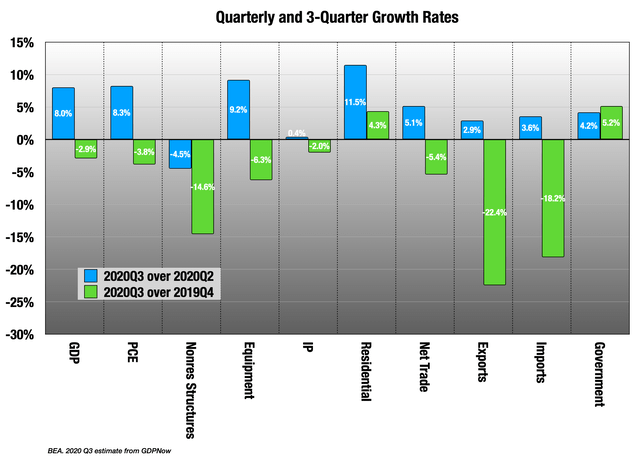 These are not annualized, but the headline numbers are, so we are going to see some very large numbers in the media. Here’s that same chart, annualized: 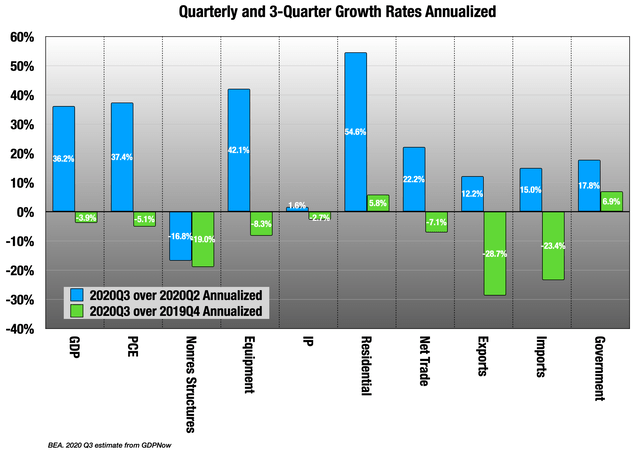 So you can see how distorting annualization can be, especially in the QoQ. So let’s dig into the categories.

Consumption is 69% of GDP, so this is where most of the action is. We already have a lot of insight into this, because we get monthly data, though it only takes us through August. So what’s going on under the hood of GDPNow’s number, 37.4% annualized or 8.3% QoQ, is mostly this: 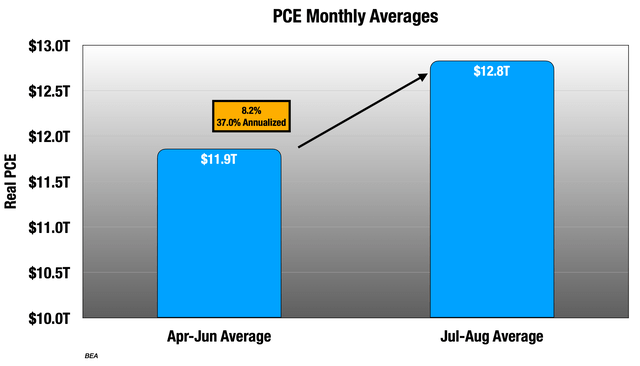 There were some minor adjustments from CPI and the retail sales numbers that bump it up to 37.4% annualized. So, the bigger picture:

So 37.4% annualized growth actually means -3.8% over 3 quarters, about $800 billion shaved off the incoming growth trajectory.

The incoming situation in investment was already a little grim, and we’ll look at that in a moment. We are going to see some very large numbers in the splits here like 42% growth for equipment and 55% for residential construction. But this has been a wild ride in all the splits, except IP investment which has been more stable. 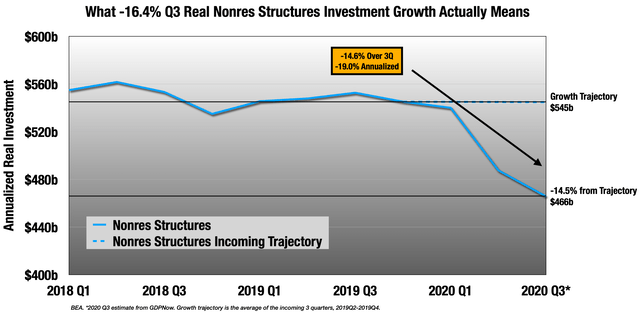 As you can see, the incoming trend was flat, and if GDPNow is correct, that will mean this category is down almost 15% over 3 quarters. The $79 billion shaved off the incoming trajectory is offset a bit by residential construction, up 54.6% annualized in Q3 in GDPNow’s telling. 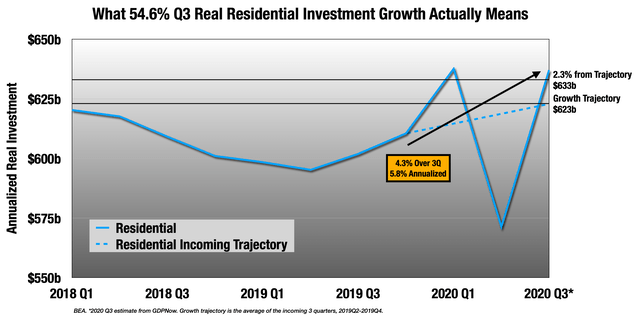 So that $79 billion would get offset by $10 billion from residential. This one is a really wild ride, as you can see, and it’s debatable whether this is sustainable.

Next, equipment, up 42.1% annualized in the GDPNow tables:

This one was already deteriorating before the pandemic, declining at an average rate of 0.6% a quarter. This is a nice recovery from Q1-Q2, but still down 6.3% over 3 quarters.

IP was the strongest investment category on the incoming numbers, up at average of 1.6% a quarter, or about 6.5% annualized. It has pulled off that rapid growth trend, and looks to be pretty flat in GDPNow’s numbers:

So if GDPNow is right, IP investment will be 5.3% off that rapid growth trajectory.

Net trade, what is added to the top line of GDP, is exports minus imports, otherwise known as the trade deficit. This one is right on trend: 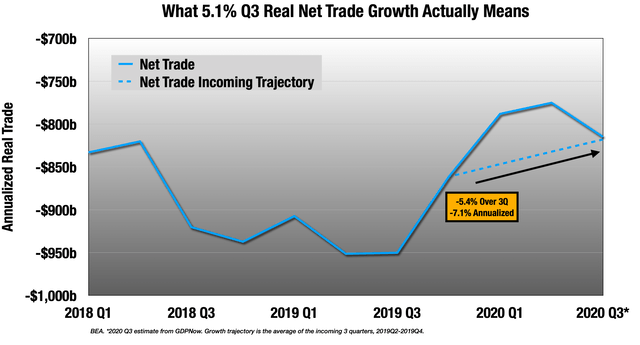 If GDPNow’s numbers are right, the deficit will have declined by 5.4% over the 3 quarters. But that is hiding a collapse in both exports and imports.

As you can see, that giant annualized number barely moves the needle here. There’s about $600 billion in 2012 dollars missing from exports off the very flat incoming trajectory. But imports have collapsed even more, and that’s why the deficit is declining.

So the manner in which we account for trade in GDP is really hiding a huge collapse.

GDP is calculated by what is spent and who does the spending, so government spending only is counted when a good or service is purchased by a government entity. This leaves out two crucial portions of what governments spend money on: employee salaries and government benefits. These are counted only when the recipient spends or invests the money. If they save it, it never makes it to GDP.

So government salaries are always a large nut that is not counted, but benefits have of course grown, doubling from February to April, back down to 30% above February levels in August. In Q1 that was $533 billion in total government benefits, and $284 billion in July and August.

So a lot is missing from this chart: 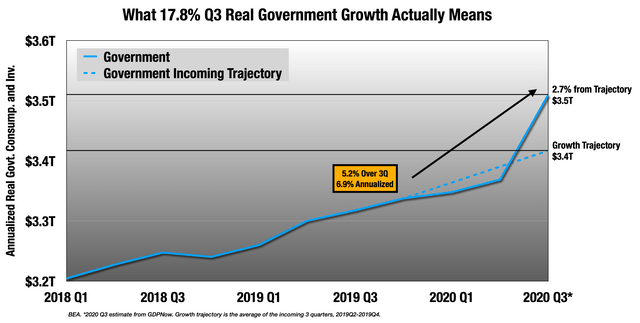 But as you can see, government was also buying a lot more goods and services in Q3 if GDPNow is right, up 2.7% from the rapidly-growing trajectory.

Inventories are transitory. They go into a grain silo, factory, warehouse or store, and are hopefully gone soon. But despite their transitory nature, they can often have a large effect on quarterly GDP, like in Q2: 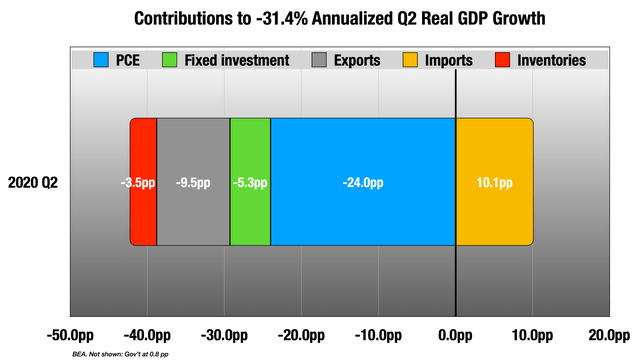 So destocking alone took out 3.5 pp annualized of real GDP all by itself. But the Q2 destocking, also a function of supply chain issues in China, is turning around in GDPNow’s telling. GDP accounting adds the change in the change in inventories to the top line, which is $196 billion annualized or $49 billion quarterly in GDPNow’s tables. So this will add about 4.6 pp QoQ annualized, 1.1 pp QoQ, to the real GDP top line if they are correct.

Not The Greatest Economy Ever

You may have noticed that those incoming growth rates are nothing to write home about. That is because, contrary to the President’s many statements on the subject, we did not have the greatest economy ever back last winter before the pandemic.

Anyone who thinks that the last three years were the greatest economy ever has very little memory of the 1960s through the 1990s. We are now two complete cycles into a period of tepid and declining growth. Let’s compare the last 20 years with the previous 20 years: 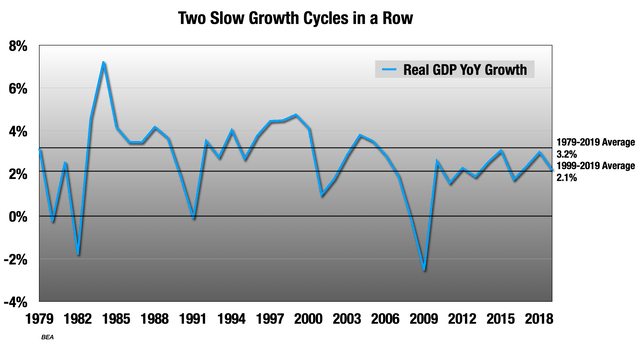 Growth in the last 20 years is over a full percentage point off the previous 20 years. In fact, the 20-year growth rate is the lowest it has ever been, and has been declining rapidly since 2002: 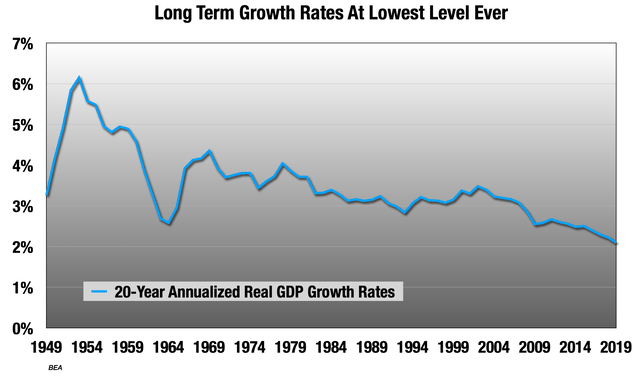 So we are in a period of low inflation and slow growth, even with rates historically low. This is often referred to as “secular stagnation,” or more colloquially, “Japanification.”

The reasons given by economists generally are:

But the Trump economy was not even the best in this cycle. It is essentially the Obama economy, just with a lot more debt. Starting with GDP: 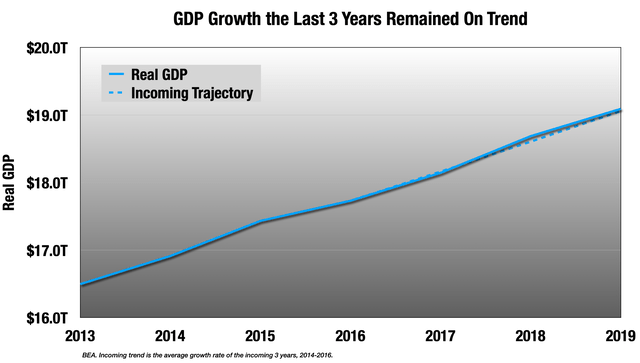 As you can see, the difference is tiny, only 0.2% after 3 years. The lines are almost indistinguishable. 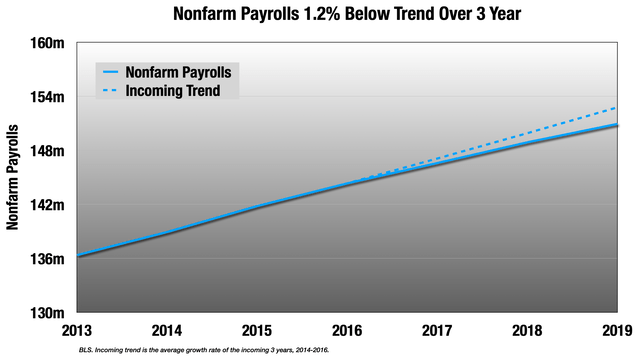 This is to be expected at the end of a cycle, as marginal job gains become harder to come by, but that hardly looks like the greatest jobs record ever. Consumption, the driver of the US economy, was also below trend: 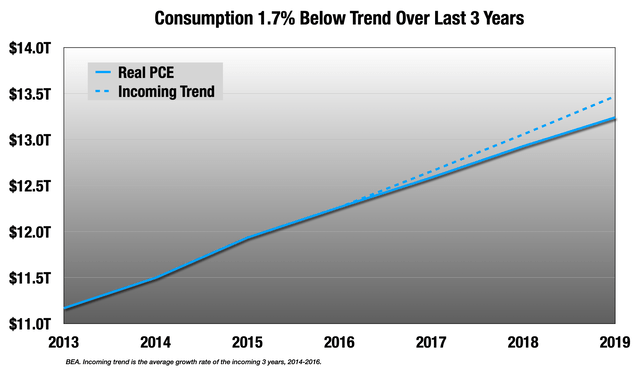 Investment growth, the driver of future economic growth, really fell off in 2019: 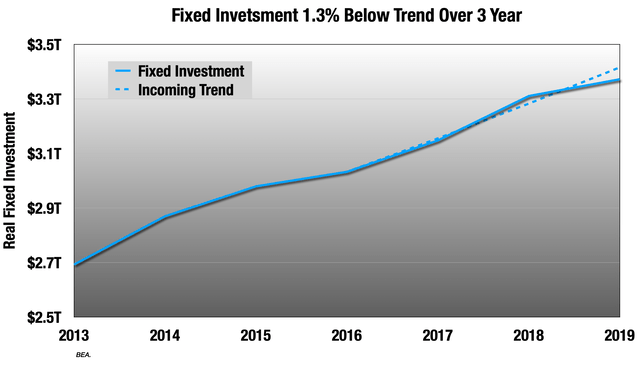 Where Trump excels is at not collecting taxes and spending more money. 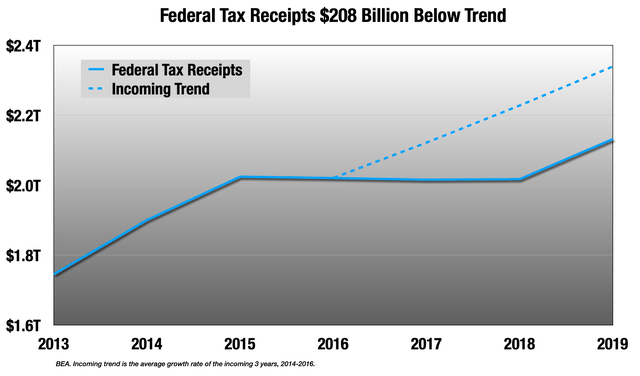 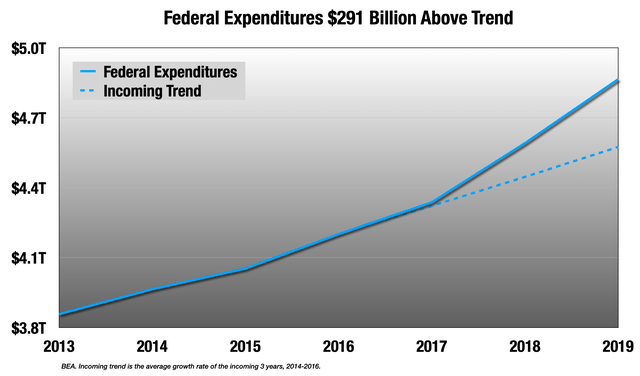 We have spent the last 4 years ignoring the underlying problems of demographics, retirement security, and income inequality, and the problem has just gotten worse. If we don’t deal with these core issues, the recovery will be even more tepid than the last two.

If You Only Look At The Headline, You Have No Idea What Is Happening

This is one of those things I say to make myself sound smart, but it has the added benefit of being true, now more so than ever. There is so much change happening under the surface right now, some of the most rapid shifts in consumer behavior ever, that a single headline number can’t come close to telling the story.

I’ll be back next week with a deep dive on the actual release.

Market Stuck Near All-Time Highs Just a short note this week so that I can catch up on my “Turkey Induced Coma.” Despite three consecutive Monday announcements of “potential vaccines,” an agreement by President Trump […]