Headquartered in Stuart, Florida, Seacoast Banking Corporation of Florida (NASDAQ:SBCF) is a $7.3 billion asset community bank based with a footprint that spans from Tampa to Orlando to Ft. Lauderdale, Florida. Over its historic past, the bank has attempted to expand market share through a combination of both organic and acquisition/partnerships of local peer banks.

Concurrently, over the past few years, the company has invested significantly in data analytics and multichannel delivery systems to accelerate cost reductions and generate additional revenue in a more precise manner.

While I believe most banks are likely to fundamentally improve their respective profitability through additional scale and cost curtailment, when factoring in its growth potential, SBCF appears appropriately valued to me, especially given its turbulent credit history. While over the long term, I do have a positive bias for the bank, the current valuation provides little upside relative to peers.

In my mind, SBCF is the ideal – “don’t settle, just be patient” – by that I mean, don’t just settle for a decent bank at a great price. Rather, just wait and be patient for a more attractive entry point to reveal itself. SBCF is a well-run bank and has a bright future; however, the share price today leaves limited near-term upside relative to peers.

As one can see from the chart above, the current valuation (using Price to Tangible Book Value or “P/TBV”) is low, but not anywhere near the once-in-a-decade lows seen at peer banks. If shares were to stay at current levels, when banks work higher, I think SBCF is likely to have an average performance (thus my neutral stance). If the shares were to dip to 1.0x P/TBV, I would suggest averaging into the stock immediately.

Noninterest income revenue was a little softer than expected as mortgage strength was mostly offset by lower deposit fees. Reported fee income totaled $15.0 million, which represents just a $0.3 million increase from the first quarter. Mortgage banking fees were up pretty significantly to the tune of $1.4 million, or 61%, when compared to the first quarter. While still small, wealth management also helped drive a higher second-quarter fee income path. 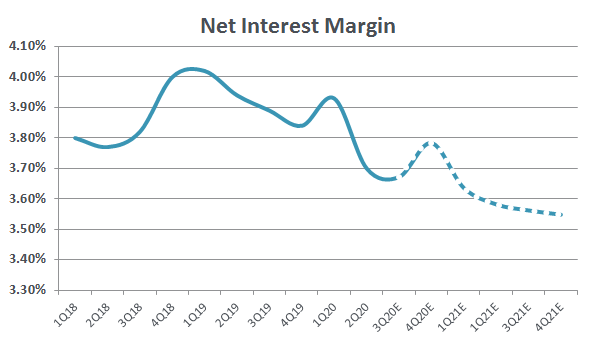 In my mind, the core NIM should remain fairly stable until the end of the year, but some longer-term pressures are likely to press the NIM lower if rates remain compressed. I think this is because legacy loan yields and securities yields are under pressure from lower repricing and add-on rates in particular.

For the rest of 2020, I expect lower deposit costs to largely offset some asset yield compression. Also the PPP loan forgiveness should help boost the margin, whenever that actually happens. When thinking about the medium term, asset yield pressure will likely start to contribute to a gradual 5 basis points of NIM compression on a core basis per quarter.

In the second quarter, the loan loss provision was just $7.6 million relative to the $29.5 million reported in the first quarter. I generally think that management was pretty aggressive in recognizing macroeconomic risk factors in the first quarter, so the limited reserve build in the second quarter makes some sense. The second quarter proved that asset quality remains a bright spot, but deferrals likely remain high until October, which could put a lid on outsized returns until its third-quarter earnings report in a few weeks. 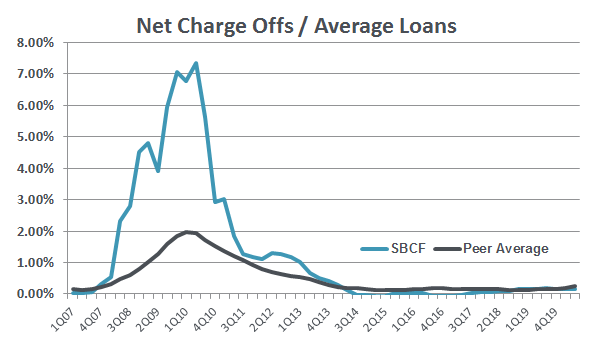 Ultimately, the future reserve level will likely adjust based on the performance of loans coming off deferral, which are more elevated for SBCF as the company was more liberal in granting deferrals to customers. At the end of the second quarter, the ratio of allowance for credit losses to total loans, excluding PPP loans, was 1.76%. 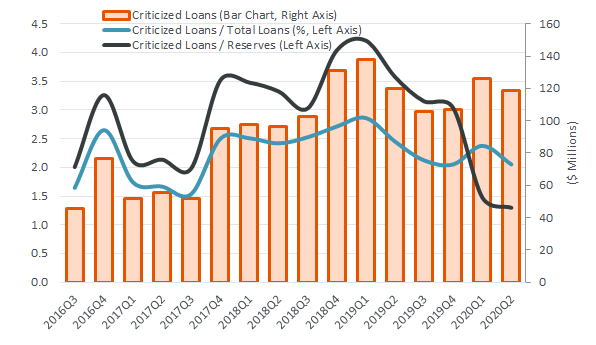 This prudent additional reserve building in response to ongoing economic uncertainty added to the overall allowance to the tune of 15 basis points in the second quarter. Net charge-offs were $1.8 million, or 0.12%, of average loans compared to $1.0 million, or 0.07%, in the first quarter.

When looking at SBCF’s massive NCO spike during the last recession, one must remember that SBCF was a tiny bank at that time, with just $2 billion in assets. Today, management seems to have tightened lending standards and the bank has seen some slower loan growth as a result.

With a lack of clarity now, I would expect new lending efforts will be limited and relationship managers are likely to be focused on serving existing clients (rather than calling on new clients). Retail, within commercial real estate, remains the primary watch area, in my mind, as restaurants and hotels in Florida are performing well.

Over the long term, management should be able to improve revenue generation within its existing customer base and better allocate resources to high profit opportunities associated with higher conversion probabilities.

I think the bank has a very attractive and low cost deposit base, which could be attractive to other banks in an M&A scenario, but also may enable greater margin expansion as rates rise in the coming years. While the shares today appear fully valued, to me the only thing missing to this story is a better share price entry point rather than an operational change.

Wall Street sells stocks and bonds, but what it really peddles is hope. – Jason Zweig It is rare to find a stock that is so consistently strong over days, months, years, and decades. There […]