Headquartered in Pine Bluff, Arkansas, Simmons First National Corporation (SFNC) is a financial holding company for Simmons Bank. As of the end of the second quarter, the bank had just over $21.9 billion in assets. With its more than 230 branches located throughout the middle United States, SFNC has established business operations in Missouri, Arkansas, Oklahoma, Illinois, Kansas, Tennessee and Texas.

To me there are a limited number of catalysts for the stock over the next few quarters. While most banks are trading at a discount to their relative past valuations, I’m not so sure that SFNC is going to rebound with bank peers as the recession tide once again recedes.

To me, valuation could remain rather muted until profitability levels bottom out and the credit profile is proven to be in sound quality. Growth will likely come more into focus as we progress closer to the end of the year. While the overall growth outlook could improve, along with profitability, I think investors are going to be a little weary of SFNC because of its incredibly acquisitive acquisition history. More times than not, when a bank does an acquisition only the largest loans are re-reviewed in the diligence process. Also, loans are rarely ever stressed for a possible recessionary environment outcome.

In my mind, the only way this bank begins to outperform peers is by reporting back-to-back quarters of solid credit, at worst limited deterioration from now until the end of the year. Personally, I am very skeptical of banks that “roll-up” smaller banks in order to turbo-charge growth. I would much rather watch from the sidelines then invest in something that is a bit of a credit gamble.

In the second quarter, SFNC reported net interest income of $163.7 million, down just slightly from first quarter levels (of $167.5 million). While the overall loan portfolio did see positive growth, it was largely caused by the addition of PPP loans rather than positive core lending. The net interest margin (NIM) contracted 26 basis points. The sizable decrease was caused by a significant drop in loan yields, only partially mitigated by a drop in funding costs. Since SFNC has been so acquisitive, I think the core margin (which excludes purchase accounting accretion) makes more sense to analyze. That fell from 3.42% in the first quarter down to 3.18% in the second quarter of 2020 (or a drop of 24 basis points).

In the second quarter, total loan growth exceeded $230 million. While SFNC did fund $960 million in PPP loans, it was partially offset by a sizable amount of paydowns in energy, commercial real estate and single family loans.

Fee income was also up from first quarter levels. While service charges were down, nearly every other line-item increased from the first quarter into the second. There was also a $2.2 million gain for the sale of a branch location. After backing out non-core fee income items, I believe SFNC had $7.6 million in core fee income in the second quarter relative to $6.9 million in the first. 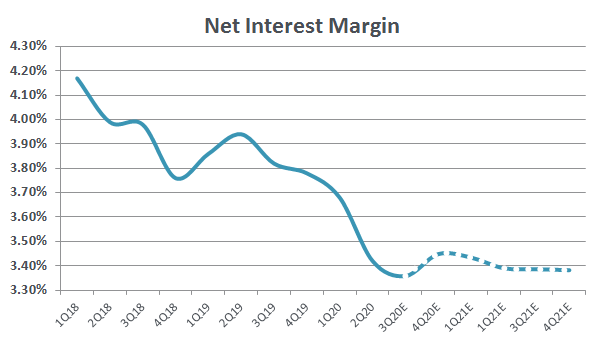 With comparison to peer banks, SFNC is likely to face limited future NIM expansion. While there is likely to be a positive effect from PPP loans being forgiven, future purchase accounting accretion is likely to wane. When adding those two factors together, it roughly balanced itself out over the next couple quarter. While this is more of an optics problem, I think overall loan growth is also likely to face some headwinds, as see in the non-PPP loans decreasing from first quarter levels.

While most banks have seen limited net charge-offs (NCOs) thus far in this pandemic induced economic recession, SFNC’s NCOs are starting to turn higher (as see in the chart below). In the second quarter NCOs were $38.2 million.

From that sizable amount, more than $32 million came from Bank SNB and Southwest Bank (both 2017 acquisitions) loans associated with energy. While this very well could be a “one-off”, I am under the assumption that SFNC’s long history of acquiring “scratch and dent” banks (ones that have minor credit problems at time of acquisition) is going to create a litany of small future NCOs. Even if the bank does have a quarter of near zero NCOs, I would imagine many investors would continue to remain skeptical. 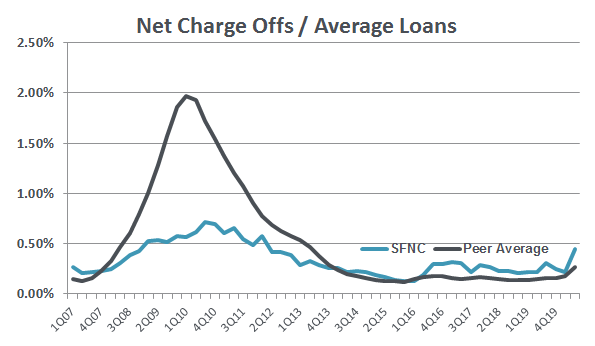 While it is always difficult to measure future credit pain potential, one thing investors can do is measure the reserve against problem loans. Since the reserve acts like a cushion for equity shareholders, it’s important to know how much is left relative to potential problem loans. 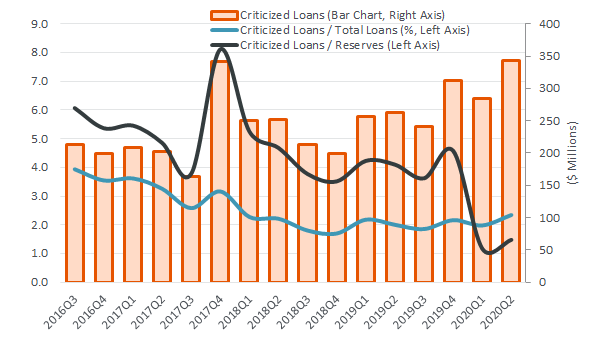 When I have done credit analysis for other banks, I typically look at criticized loans relative to the loan loss reserve. While SFNC has significantly improved its positioning, I am still not sure that the future criticized loan levels won’t continue to increase. As management explained, the loans that were just charged off were previously provisioned against, it does leave me a little skeptical as to how many other problems loans are waiting to drop off the balance sheet.

This growth strategy has shown positive effects for SFNC’s overall profitability, as banks were added overlapping costs were extracted. However, now that very same strategy is being called into question in terms of credit review. Even if SFNC reports a solid third quarter, I’m not so sure the bank is going to be rewarded like peers otherwise would have been. I think it will take multiple quarters of positive credit news before SFNC once again trades to pre-recession levels.