Utilities are a fairly popular investment among more risk-averse investors. There is in fact a very good reason for this as utilities are typically reasonably stable entities that are able to weather through most economic conditions and usually boast fairly attractive yields. This is because utilities provide services to homes and businesses that most people consider to be absolute necessities in our modern world. Therefore, most people will do everything in their power to make sure that the utility bills get paid as they will not want to have those services turned off. Many utilities tend to be overlooked by investors, though. For example, it is usually electric utilities that gather much of the attention, but gas and water utilities can also be good investments. In this article, we will take a look at South Jersey Industries (SJI), a natural gas utility that primarily operates in southern New Jersey and parts of the north of the state.

As just mentioned, South Jersey Industries is the largest natural gas utility in the state of New Jersey. This, of course, means that the company operates a network of pipelines throughout its service area that supply natural gas to homes and businesses. Although the company primarily operates in the seven southern counties in the state, it also has an operation up in the Elizabethtown area, which is a suburb of New York City:

Although the company’s service area is relatively small in terms of land area, it is very highly populated. South Jersey Industries operates more than 10,000 miles of pipelines throughout the area and boasts more than 700,000 total customers. The majority of these operations are located in the south as the company has 6,600 miles of pipelines there with more than 400,000 of its customers in the area. The north part of the service area contains the rest of the company’s operations. As the company’s service area is essentially suburbs of New York City and Philadelphia, it is very densely populated, although parts of the northern region are somewhat less so.

One of the unique things about utilities is that they are frequently monopolies in their service areas. This results in a very high degree of regulatory scrutiny, which is something of a double-edged sword. In short, regulators have to approve the prices that the company wishes to charge its customers. In most cases, the regulators do allow the prices to be set at a level that allows the company to generate a positive free cash flow. This is a positive thing for investors because it does result in the dividend that the company pays out being reasonably secure. It does, however, limit the company’s growth because it cannot raise its prices to make more money, and generally, its ability to expand outside its service area can be somewhat limited, meaning that it is dependent on population growth to increase its revenues.

Fortunately, South Jersey Industries has seen its customer base grow over the years. This is true in both its southern and northern regions. As we can see here, the company’s customer base has grown at a 1.5% compound annual growth rate over the past decade: 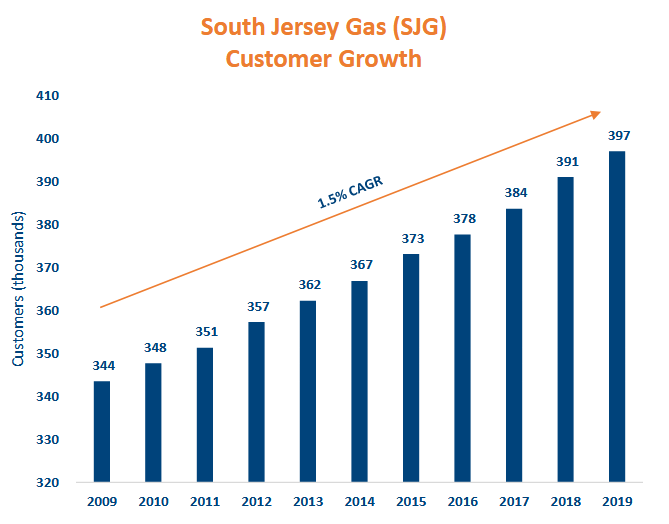 The company has also grown its customer base in the northern part of the state over the same time period, although at a much lower rate: 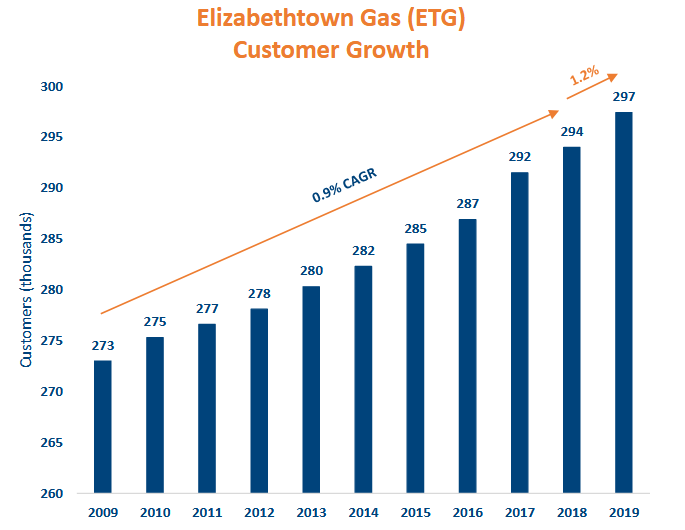 It is generally nice for a utility to have a growing customer base because that translates into higher revenues. As mentioned, this is one of the only ways for a utility company to grow its revenues. As we can see though, this growth rate is certainly not as high as we would see in many other industries. This is one of the reasons why companies like South Jersey Industries have such high dividend yields as their low growth rates would otherwise not provide investors with an adequate return.

Unfortunately, there are signs that this trend may not persist. The U.S. Census Bureau recently reported that New Jersey has now joined the ranks of states that have begun to lose population. Admittedly, it was a very small loss of 0.04% over the 2018-2019 period (more recent data is not yet available), but it is still a worrying sign, particularly because the losses were primarily members of the millennial generation, which shows us that it is not recent retirees moving to a warmer climate. Thus, the problem may be worse than it appears should it persist. This would, of course, have the exact opposite effect of a growing customer base on South Jersey Industries.

One thing that we have seen many utilities do recently is engage in various green initiatives. Admittedly, we would not usually expect something like that out of a natural gas utility because the whole nature of the business is pumping natural gas (a fossil fuel) to people’s homes and businesses to be burned. Nonetheless, South Jersey Industries is indeed undertaking some green initiatives. There are two likely reasons for this. The first is to simply satisfy the demands from consumers and regulators that the company address the issue of climate change. The second is that the company is concerned that its customers will convert from natural gas to electricity for their heating needs, and it wishes to ensure its own longevity.

One of the methods that the company is using to improve its green credentials is simply trying to reduce the energy consumption and emissions from its own operations. It is doing this by replacing some of its older infrastructure with newer more efficient designs and encouraging its own customers to reduce their consumption. The company claims that it was able to do this without reducing its own profits, but little information is disclosed about how it is able to accomplish this. It does believe that these changes will reduce carbon emissions by 500 tons, though.

Another method that the company is using to improve its own green credentials is investing in various renewable energy projects. These projects include solar energy, combined heat-and-power, and landfill-to-electric generation. The fact that the company is making these investments could be a sign that it believes that customers will switch from natural gas to renewable-generated electricity for their heating needs. Thus, the company is making some investments in this area in order to remain relevant and ensure its own longevity.

In order to further its renewable energy ambitions, South Jersey Industries has formed something called Catamaran Renewables. This is a joint venture between the company and Captona (a renewable energy developer). The two entities together have deployed about 1.3 gigawatts of renewable projects, so there does appear to be some experience here. In addition to this joint venture, South Jersey Industries purchased a late-stage fuel cell project on Staten Island, New York, that is capable of producing a total of 7.5 megawatts. Admittedly, this is a fairly small proof-of-concept project, but the company has already secured contracts from two customers to use the output from this project, so it is guaranteed to produce revenues for the company.

The company’s growing investments in renewables could bring some advantages in the stock market as well. This is largely due to the increasing popularity of ESG (environmental, social, and governance) investing, especially among millennial investors. In theory, this means investing your money in companies that are actively making a difference in the world, although not all of the mutual funds that have popped up to meet this demand actually follow that philosophy. Regardless, though, the fact that these funds and this form of investing have become popular means that there is a great deal of money looking for a home in “green” companies. Thus, South Jersey Industries’ push into renewable energy could put some buying pressure under the stock.

One of the reasons why conservative investors tend to like utilities is that they usually have relatively stable cash flows and finances. This is not exactly true with South Jersey Industries, however. As we can see here, the company’s operating and free cash flows have varied wildly over the past year:

(all figures in thousands)

On an annual basis, they have been much steadier, however:

(all figures in thousands)

The company does not expect this situation to change anytime soon. As we can see here, it expects to issue both stock and debt this year in order to continue to finance its capital expenditures: 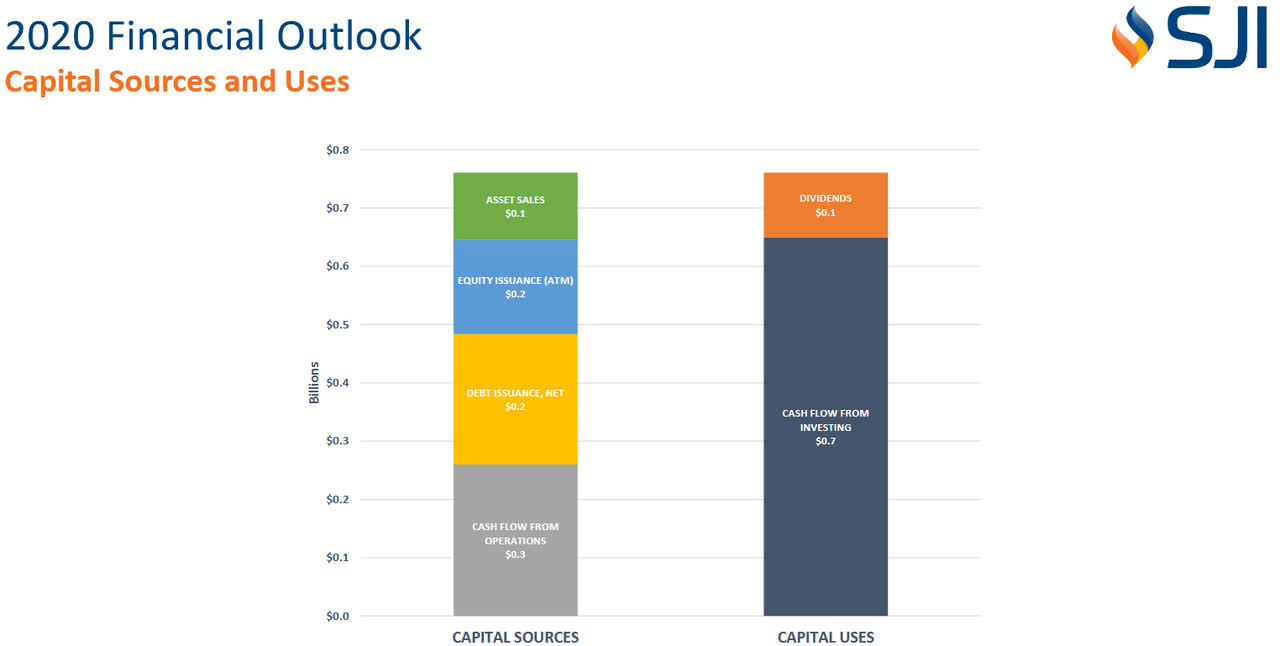 Once again, this is not the kind of thing that we like to see because it clearly illustrates that the company cannot actually sustain itself through its operations. If this was just a one-year occurrence, it would not really be a problem, but this is clearly an ongoing problem. This could pose a very real risk should something cause the company’s cash flows to decline. It could even be a problem if its cash flow does not rise enough to cover the interest and dividends on the new debt and equity and as already been shown, the company’s cash flow can be somewhat volatile. Overall, there are better utilities out there to invest in.

In conclusion, utilities generally make for good investments for risk-averse investors. This is because they usually have stable cash flows that allow the company to pay out a sizable dividend to its investors. These companies are also generally monopolies in their area, so have limited competition. The problem that utilities can have is when they spend in excess of their cash flows on various projects for an extended period of time. South Jersey Industries appears to have this problem as it relies extensively on debt and stock issuance to continue to raise capital. This is ultimately not sustainable, and I would advise investors to look elsewhere.

At Energy Profits in Dividends, we seek to generate a 7%+ income yield by investing in a portfolio of energy stocks while minimizing our risk of principal loss. By subscribing, you will get access to our best ideas earlier than they are released to the general public (and many of them are not released at all) as well as far more in-depth research than we make available to everybody. We are currently offering a two-week free trial for the service, so check us out!