Since the company reported results on August 26th, Splunk (SPLK) stock underperformed both Nasdaq and S&P 500. Splunk stock is down 4%, while Nasdaq is down 2%, and S&P500 is down 1% since late August. The stock underperformance may have been due to the company reporting revenue that missed expectations. This underperformance is not warranted in our opinion, given Splunk’s results were solid, and the miss on the topline is nothing to worry about and is easily explainable. The company continues to execute well and is aggressively accelerating its business model to Cloud/subscriptions. Cloud/subscription revenue is recognized over the term of the contract (typically in the two-to-three-year range), unlike perpetual revenue that is recognized upfront. The use of subscriptions understates revenue, given that every $6 in perpetual revenue translate to roughly $2 in subscription revenue that is recognized in year-1, given that subscription revenue is recognized over a three-year period rather than upfront.

Splunk is considered the leader in log management and has expanded its offerings into adjacent markets such as observability, data fabric search, and stream processing by acquiring cutting-edge assets and integrating them into its product portfolio. Splunk is a reasonably valued cutting-edge software company that is putting up impressive revenue growth numbers at scale, solid and expanding customer base, and an industry-leading position, making the stock a buy.

Splunk reported F2Q21 results that appear disappointing, given the company printed revenue that missed expectations by about $30 million. Revenue was $492 million and was down 5% Y/Y. Delving into the report closely, one can see that cloud revenue accelerated to $126 million and was up 79% Y/Y, from a year ago period of $70 million. More interestingly, Cloud revenue for FY20 was 13% of total revenue or about $307 million. YTD in FY21, the cloud revenue is already 26% of the revenue or about $238 million. In terms of transition to a subscription model, YTD, cloud generated 50% of total software bookings, up from 35% in the prior year. Splunk expects more than 60% of total software bookings this year to be from the cloud/subscriptions, two years ahead of the prior guidance. The following chart illustrates the acceleration of cloud contribution to software bookings.

The following chart illustrates the acceleration of the subscription model, with subscription revenue doubling from the prior-year period. 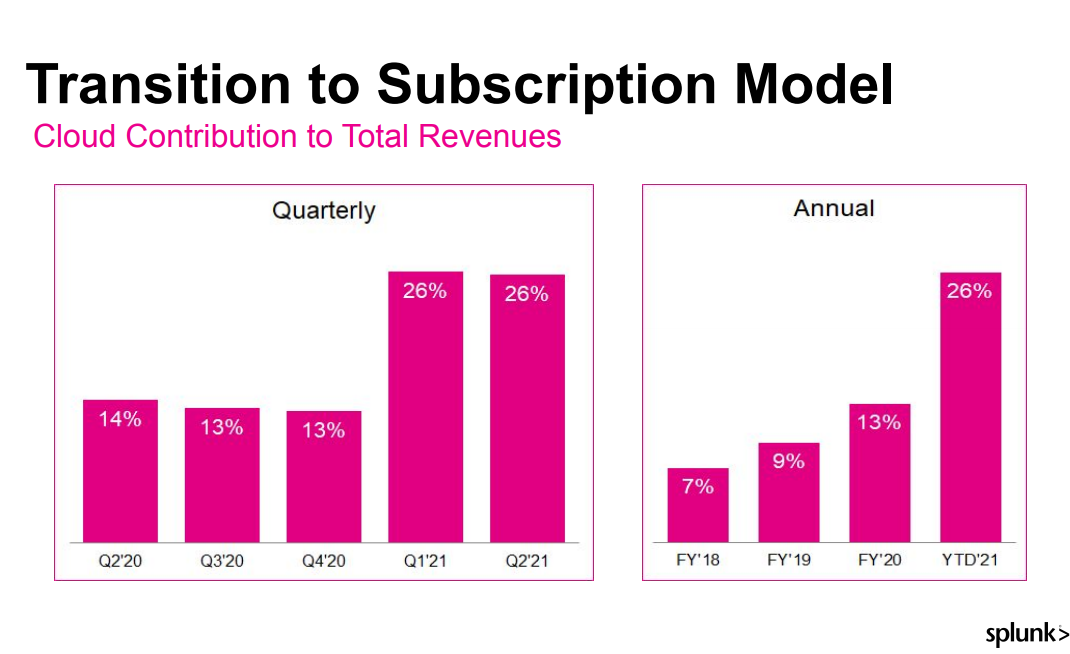 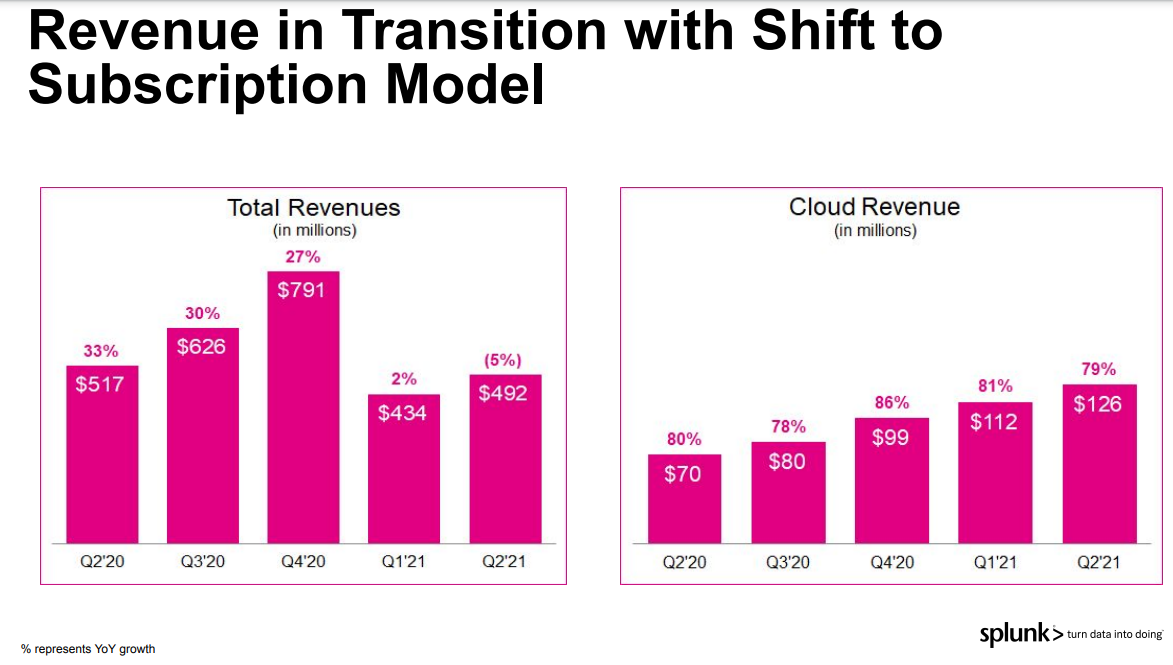 Bullish on the outlook

Splunk is bullish on its growth prospects, and it continues to expect its ARR to grow 40% until the end of FY23E to $4.61 billion, from $1.68 billion in F2020. Similarly, the company expects to generate $1 billion in cash flow from operations by the end of FY23.

Splunk expects the gross margins for the cloud business to improve from the current 59% to over 60% in the current fiscal year and then to close to 70% by the end of the next fiscal year. The gross margin improvement for the cloud business is driven by higher utilization of the existing infrastructure. We expect an acceleration in cloud revenue to provide predictability in revenue, improving gross margins to drive leverage and earnings as we head into C2021 and beyond. The following chart illustrates the improving gross margin over the last several quarters. 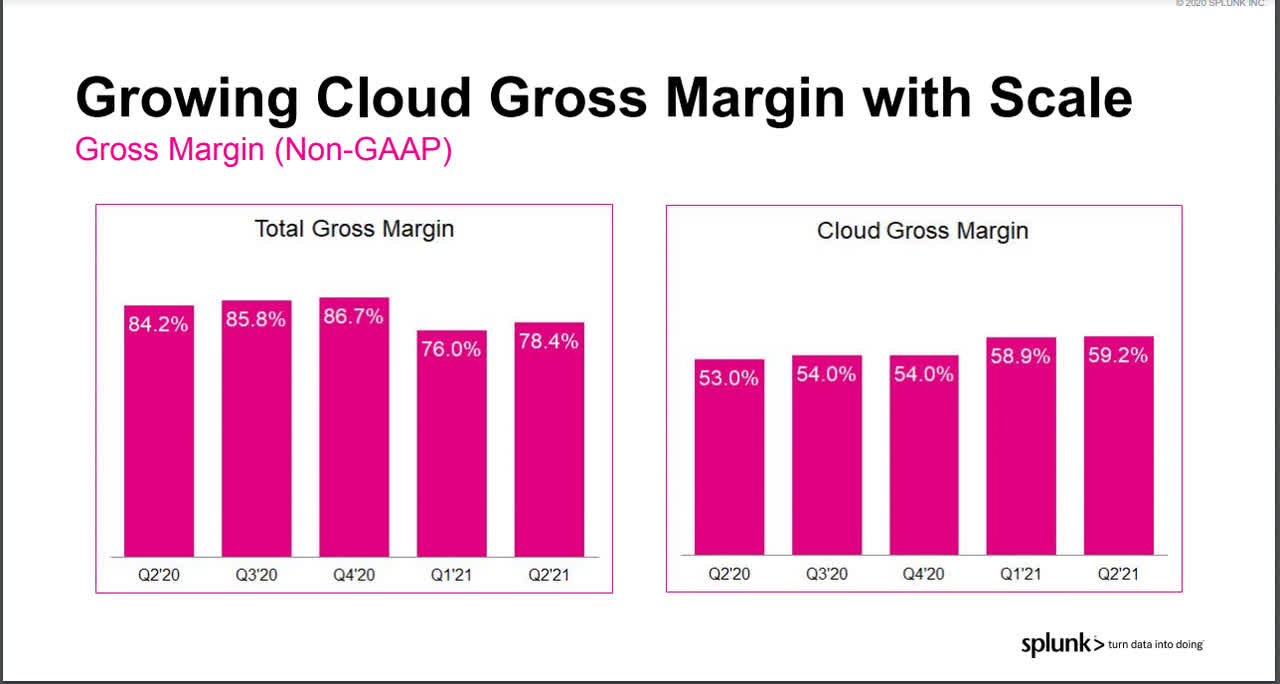 What excites us about Splunk

Splunk remains one of our favorite technology infrastructure companies, along with Vmware (VMW), Zscaler (ZS), and Microsoft (MSFT). Splunk is a pioneer in machine log analysis, and its software is considered the gold standard in obtaining insights from machine-generated log files. Splunk use cases now range from IT operations, security, DevOps, and user behavior analytics. Splunk’s software can analyze data that is at rest (within a database/in an index) as well as data on the move (i.e., data traveling from a source to the storage destination) in a wire.

Splunk’s software makes Digital Transformation ((DX)) easy. As companies become more digital and use the hybrid cloud to deploy their IT infrastructure, troubleshooting problems can be challenging. The use of Splunk software makes it easier to troubleshoot problems. Splunk’s software is becoming the nerve center in the enterprise with a wide variety of use cases. As they say in ice-hockey, Splunk is skating to where the puck is likely to be and is now firmly on the path towards real-time monitoring of applications and infrastructure.

Splunk continues to use the cash on its balance sheet to acquire cutting edge technology companies to fold into their software stack. The company spent over $1billion to acquire SignalFx, Omnition, and Streamlio to get into real-time analysis and search (Data Fabric Search). Splunk’s Data-to-Everything platform is now much more capable, giving companies such as Datadog (DDOG), Elastic Search (ESTC), Dynatrace (DT), New Relic (NEWR), and App Dynamics (CSCO) a formidable competition.

Now with new pricing (announced in September 2019), customers can acquire Splunk either on the amount of data that is ingested into the index or via infrastructure based pricing. The new infrastructure based pricing removes a major irritant for many customers. It should help Splunk accelerate the growth of the company and remove the pricing umbrella, which competitors such as Elastic and Sumo were exploiting. Net-net, we believe Splunk is the best asset to own in the monitoring space, given its leading position in the enterprise, ease of use, marquee customer base, expanding use cases, and a reasonable valuation.

When valuing SPLK, we use EV/Sales as the primary valuation metric. Given that many of the companies in the infrastructure and monitoring tools, peer group are currently transitioning to a SaaS/Subscription revenue model or not sufficiently profitable, EV/Sales makes the comparisons meaningful. Also, in a takeout scenario, one of the primary metrics used to evaluate takeout price remains EV/Sales. EV/Sales makes it easier to compare with historical takeout multiples. 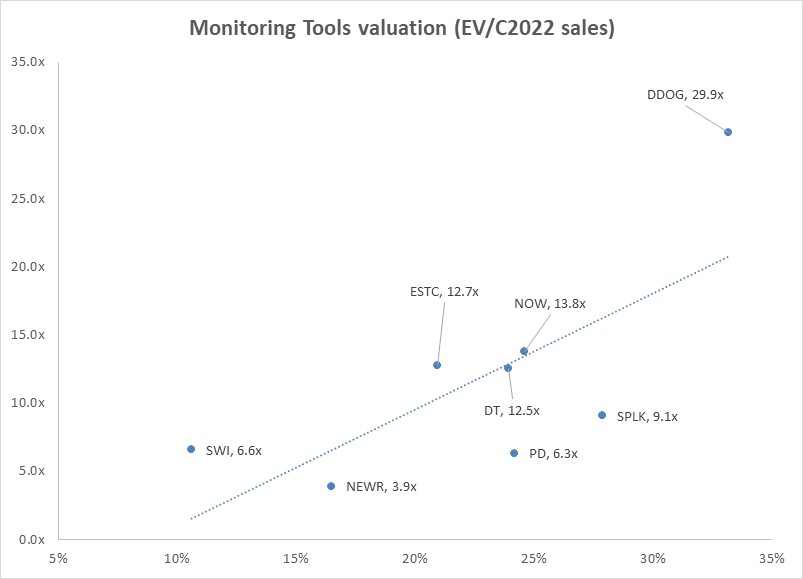 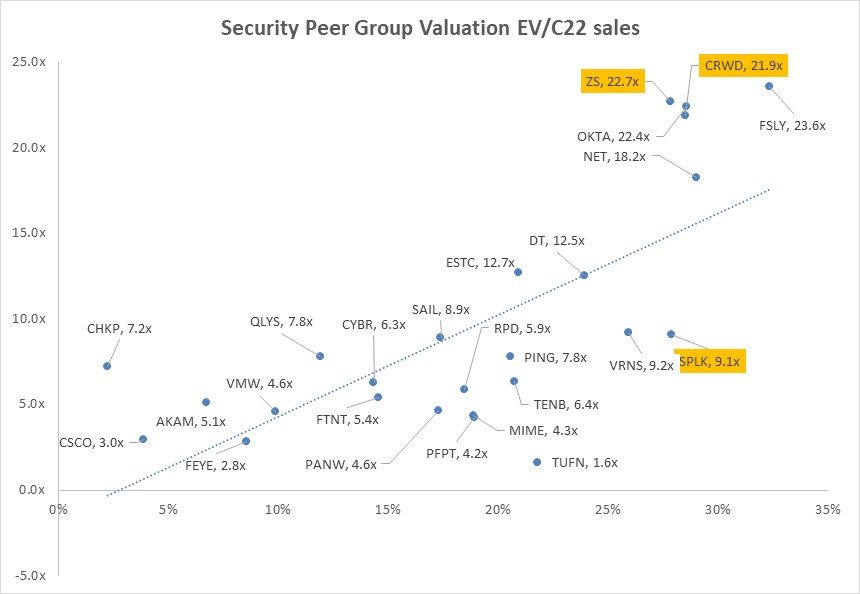 Needless to say, SPLK is cheaper than many high growth companies in the tech universe on a growth adjusted basis.

What to do with the stock

Despite the revenue miss, many well-known analysts on the Street raised their Price Targets ((PT)) for the stock. These analysts cited the strength of the cloud business as the reason to hike their price targets. According to Refinitiv data, the median PT on the Street is $240, and the mean PT is $231. The following table illustrates the changes in PT following SPLK’s results.

Based on the same Refinitiv data, out of the 38 analysts covering the stock, 30 are a buy or a strong buy and the remaining are hold, as the following chart illustrates.

Despite the bullish outlook from the company and the general tone of the sell-side community, Splunk has underperformed the market since its report on August 26th and over the last year. 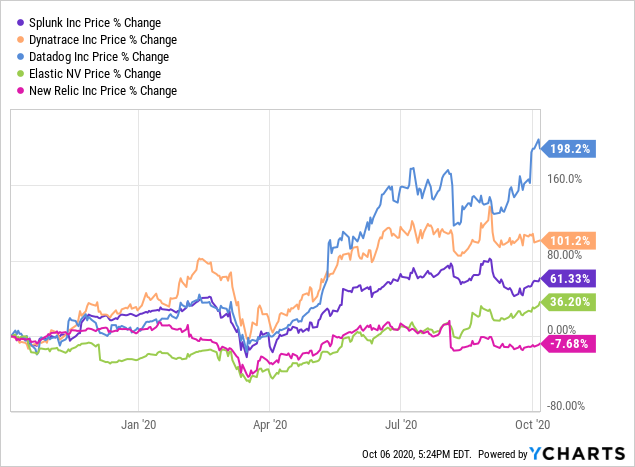 As the cloud revenue becomes a more significant portion of the overall revenue (probably top out at 80-90% of total revenue), we expect SPLK to rerate as a cloud/subscription company, driving the stock higher. Given that we expect the stock to catch up relative to its peer group following the stock rerating, we would be buying shares of SPLK as opportunities present themselves.