It Takes a Village

During their Q3 FY ’19 quarterly earnings call in July, Walgreens (WBA) management left no doubt about their feelings toward their newly expanded VillageMD partnership: they are bullish.

When pressed to qualify and quantify the potential of the relationship, Alexander Gourlay, Walgreens co-COO, noted the company expects a lift in scripts growth; and that while Walgreens commands roughly 20% of the US prescription drug market today, “…[investors] can expect [the company] to be well above 50%…of market share…” as the co-located, integrated-pharmacy primary-care clinics reach steady operation across the United States. 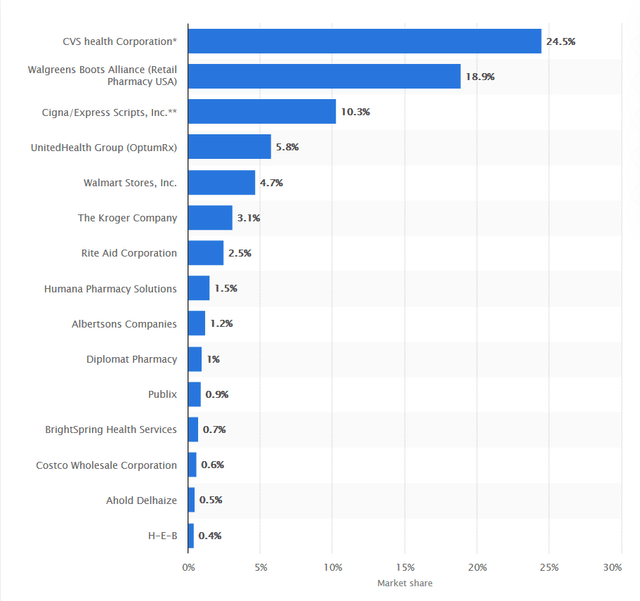 Can Walgreens really capture more than half of a market which, by one estimate, may be worth nearly $359B in CY ’20, growing somewhere in the range of 2% to 5% per year? Notably, management provided no specific timeframe to achieve this feat.

Yet, if we assume it is possible, can we then quantify the value of the VillageMD partnership over time? I present such a valuation model in this report in an effort to scrutinize and analyze my own long position in the company.

Before jumping into some numbers, a few details on VillageMD and the partnership…

Founded in 2013, VillageMD is fairly young, yet has already raised ~$500M in funding-to-date, including Walgreens’ investment of $250M in July. The company is driving primary medical care toward a clinical model with “…consistent, coordinated and personal care [delivery] to all patients at a lower cost…[via physicians enabled with] tools, technology, operations, staffing support and industry relationships.”

While Walgreens generalizes the quality of the partnership around the routine customer benefits you would expect (e.g. better health outcomes, reduced costs, differentiated patient experiences), note that the company is specifically seeking to attract patients with chronic conditions to its footprint, often reiterating VillageMD’s statistic that “…nearly $4T per year is spent on healthcare [in the United States], and over 85% of that is tied to patients with chronic disease.” With a parallel vision to expand beyond physical locations, Walgreens is also “…developing home-based monitoring and telemedicine services leveraging VillageMD’s integrated data and technology and [the company’s] own Find Care platform.”

Some key business aspects of the technology-led partnership include:

To quantify VillageMD’s potential contribution to Walgreens-specific operations, I constructed a valuation model that forecasts the company’s cash flows as a function of predicted US prescription drug market share for the period FY ’20 – FY ’25. As I always say, any model needs to be looked upon with a cautious eye.

The model utilizes a top-down scheme that effectively “backs into” forecasts for Walgreens’ total revenue in the future periods and subsequently estimates the company’s cash flow for each period. The process to derive the cash flows is fairly straightforward:

2. For each period, I estimate the dollar value of Walgreens’ US prescription drug market share benefiting from growth realized via VillageMD.

3. From the preceding data, I extrapolate an estimate of Walgreens’ total revenue for each period.

5. Finally, I feed the cash flows into a DCF model to consider the per-share “value” that the VillageMD partnership may offer. 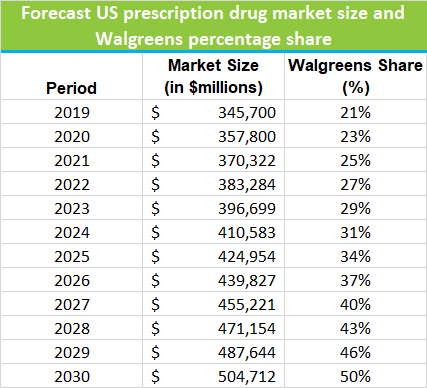 Supposing this multiple will hold across the forecast periods, it becomes a simple matter to generate estimates of the company’s total revenue. To finally “back-into” a set of cash flows, I apply a FCF margin assumption against the total revenue figures; and the resulting cash flow data can be input into a DCF analysis. So, an example of a completed model through FY ’25 is as follows:

Naturally, I can push the numbers around any way I like and thus produce any result that I desire. Of course, that is the danger of this or any kind of valuation model.

The results of the three DCF cases are as follows:

Of course, the specific per-share values generated by the DCF models carry limited value. However, I extracted a couple possibilities from the results:

Given a slew of potential headwinds, I tend to think share price values approaching the bull case are unlikely over the next few years. For example, as I mentioned already, CVS and Walmart are both in the game, and building on my point in the previous bullet, it is entirely possible that Walgreens’ $1B investment in VillageMD will prove insufficient to remain competitive. And, as they are already sitting on a massive pile of debt, allocating additional capital toward their joint initiative could prove to be a major headache. It is worthwhile to note that Walgreens had a mixed experience with its previous “version 1” clinics, with many already shuttered. Obviously, should the company fail to compete effectively, management’s forecast to claim more than 50% of the US prescription drug market will likely go “right down the toilet”. And the foregoing says nothing of industry-wide dynamics that could impact margins, namely prescription drug pricing-pressure which may be an inevitable result of a market that is considered out-of-control by some.

At present, I intend to maintain my long position in the company as I wait with baited breath for FY ’20 results on October 15. As I stated in my prior article on Walgreens, I think “…healthcare remains a high-touch affair”, even in light of current circumstances. While some analysts have argued foot traffic will continue to suffer due to the pandemic, thus impacting the feasibility of the proposed clinics, I remain of the opinion that COVID-19 will not stop patients from seeing their healthcare team, with “healthcare team” being a differentiated component (in theory) of the Walgreens/VillageMD model. As Walgreens – and really the entire industry – looks toward a future where care – chronic or otherwise – is largely home-based, their VillageMD investment may prove reasonable such that a relatively small number of physical clinics – relative to the number of total stores that is – in key markets can be stood up, in support of broader home-centered care services. While I am not too optimistic my bull-case DCF model of the prior section is achievable, I am hopeful management can get enough things “right” with the partnership such that something in between the moderate and bull cases is possible. Certainly, one of the key “things” that I hope they are right about is being able to capture 50%+ of the US prescription drug market. On that point, I am (presently) willing to leave my chips on the table under the assumption the strategy will mostly prevail, offering long investors such as myself reasonable appreciation alongside reasonable dividend growth over the long-term.

Disclosure: I am/we are long WBA,CVS,WMT. I wrote this article myself, and it expresses my own opinions. I am not receiving compensation for it (other than from Seeking Alpha). I have no business relationship with any company whose stock is mentioned in this article.