NovoCure Limited (NVCR), through the technology of tumor treating fields (TTFields), is developing, what some would call, the fourth modality of cancer treatment (behind surgery, radiation, and chemotherapy). I have been following (titled, “NovoCure: Revolutionizing Cancer Treatment”) this story since late 2017, when shares of NovoCure were trading sub-$20. The rise since then has been slow-and-steady until just recently. Since July, shares of NovoCure have more than doubled.

So, what’s behind the massive move?

Furthermore, the company continues to procure a positive net income: 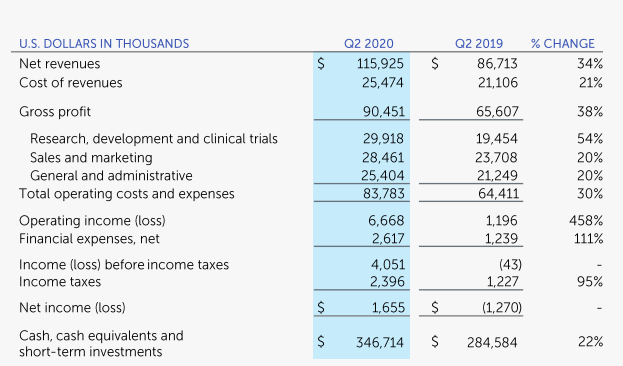 Behind the $100M+ in net revenues is its primary product, Optune, approved for use in glioblastoma, a rare and difficult-to-treat brain cancer. The company is just beginning to realize revenue in mesothelioma.

Just The Tip Of The Iceberg…

If pipeline expansion occurs as expected, NovoCure could, reasonably, haul billions of dollars per year in revenue. As for now, it’s just a matter of whether or not one believes in the science (discussed here) and how much of a grip NovoCure has on the intellectual property of “Tumor Treating Fields” – the utilization of electric fields to disrupt cancer cell division. For a loose comparison, consider Merck’s Keytruda, which is, practically, a cancer modality in itself (immunotherapy). Keytruda has already surpassed $3 billion per quarter in revenue (calculates to $12 billion per year). Also consider that Keytruda faces competition within the cancer modality of “immunotherapy”. Much like chemotherapy and radiation, TTFields is its own cancer modality and may reasonably be utilized as augmentation for all kinds of different solid cancers. And NovoCure, at the moment and for the foreseeable feature, has a stronghold (100%) on the entire modality. Furthermore, the known side effects/risks of TTFields are extraordinarily limited compared to other modalities (e.g. skin irritation, compliance issues due to application of device versus a number of serious adverse events associated with chemotherapy drugs). So while people may scoff at its current valuation in light of comparatively diminutive revenues at present, I believe upside still remains.

NovoCure continues its massive expansion in all kinds of solid tumors, including key combination trials (e.g. Keytruda in first-line NSCLC).

For the short term, the company anticipates phase 2 data in early 2021 for liver cancer. The combination trial in first-line NSCLC with Merck is expected to begin enrolling later that year.

Meanwhile, progress in phase 2 trials for ovarian, gastric, pancreatic, and brain metastasis from NSCLC continues with relevant data expected before 2024.

The company continues to secure its intellectual property, with over 180 patents expiring between “2021 and 2037” (NovoCure’s most recent annual filing). Of course, it is likely that companies will, sooner or later, begin developing generic versions of NovoCure’s products. But NovoCure suspects generics would be required to undergo their own clinical trials, which would allow NovoCure a few additional years of exclusivity.

Like all biotechnology companies, NovoCure is without its challenges.

Valued over $13 billion with <$500 million in annual revenue, shares of NovoCure may have outran itself. The current valuation, though, is more about the market beginning to realize its potential over pure financials. If TTFields is, indeed, a fourth modality of cancer treatment, NovoCure may have the “next Keytruda” on their hands, demanding valuations, at the least, double of today’s prices. But this may only be realized years from now and NovoCure faces many challenges ahead before it can finally say it has “revolutionized” cancer treatment. For now, the road to revolution looks quite bright and investors should continue to hold shares until the full story plays out entirely.

Disclosure: I am/we are long NVCR. I wrote this article myself, and it expresses my own opinions. I am not receiving compensation for it (other than from Seeking Alpha). I have no business relationship with any company whose stock is mentioned in this article.

Additional disclosure: The intention of this article is to provide insight, not investment advice. While the information provided in this article is intended to be factual, there is no guarantee and prospect investors are encouraged to do their own fact-checking and research before investing in a company. One must also consider one’s own financial standings, risk tolerance, portfolio diversification, etc. before making a decision to buy shares in a company. Many of my articles detail biotechnology companies with little or no revenue. These stocks are, therefore, speculative and volatile. Even when prospects seem promising, there is no predicting the future. Losses incurred may be significant.