As more and more economies were entering a national lockdown, investors have been pricing in more QE support in order to cover the dramatic cost of running restrictive economies to fight the pandemic. Assets held by the major 5 central banks (Fed, ECB, BoJ, PBoC, BoE) have surged by over USD 7tr since March, which has generated a tremendous recovery in most asset classes. Figure 1 shows that the US stock market, which generally suffers significantly in periods of economic crisis, recovered in just 6 months after crashing by over 35% during the COVID-19 panic and is currently trading at an all-time high over 3,600. In the previous two economic downturns (2001 and 2008), it took 7 years and 3 months and 5 years and 6 months for the S&P 500 to recover to its previous highs.

Overall, most of the asset classes have performed strongly since March, and particularly Bitcoin (BTC), which was up over 400% since its low reached in mid-March before the recent selloff. Figure 2 shows the performance of a diversity of assets since the market reached its low on March 20; Bitcoin is by far the asset that experienced the most drastic recovery, followed by the ‘FANG’ stocks, up 130% since their bottom. 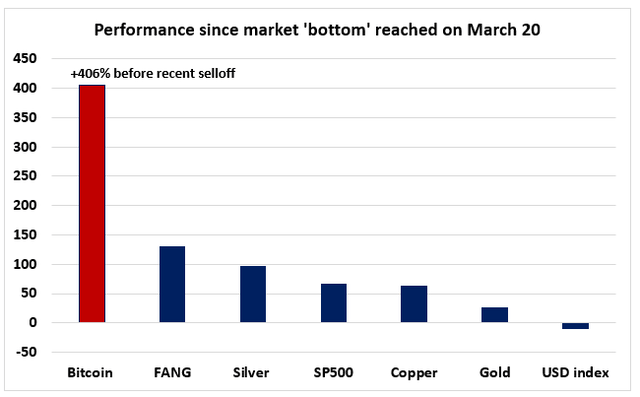 However, the aggressive 16-percent correction we have seen this week has made a lot of investors anxious as they are worried that the consolidation in Bitcoin may resemble the one in 2017 / 2018. We think that it is just a short-term bear retracement and that the cryptocurrency has still great upside potential.

Bitcoin: not that crowded this time

One interesting observation is the evolution of ‘Bitcoin’ term in Google trends; figure 3 (left frame) shows that despite the recent surge that pushed Bitcoin to its highest level since December 2017, searches for ‘Bitcoin’ were nowhere close to the levels reached three years ago. It seems that retail and professional investors were much more interested in buying stocks after the panic; figure 3 (right frame) shows that the term ‘buy stocks’ reached an all-time high in March and April according to Google searches.

Social distancing measure will remain for little while

As countries have been under national lockdown (also called ‘lockdown-lite’ as schools have remained open in most of the countries), economies are relying again on significant governments’ assistance to support the high cost of running restrictive economies. As a result, the assets of major central banks will continue to rise dramatically in the coming months; assets of the top 5 central banks are expected to grow by another USD 5tr in the coming two years up to USD 33tr in total (figure 4).

We are confident that the profits crises, which had already started in the past cycle following the Great Financial Crisis, will continue to deteriorate as long as social distancing and working from home measures are in place. In addition, consensus may underestimate another panic episode in the medium term, which will force policymakers to act as the liquidity provider of the last resort to prevent markets from falling too much.

In other words, the monetary injections to support the restrictive economies will tend to levitate assets with limited supply such as gold and Bitcoin. 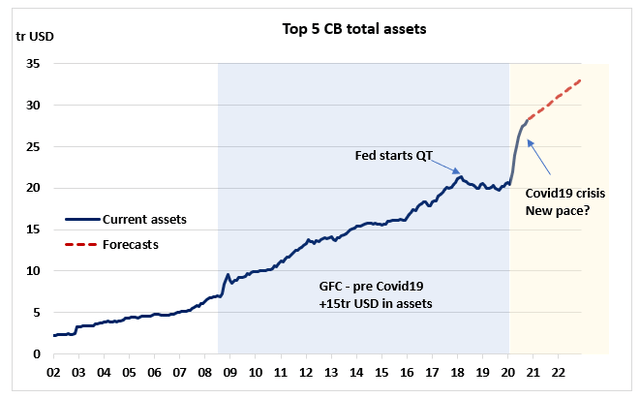 Add Bitcoin to your ‘modern’ portfolio

Investors who want to hedge against a new reflation regime in the medium term (24 to 36 months) should seriously consider owning some gold and Bitcoin in their ‘modern’ portfolio as new diversifiers and inflation ‘hedges’. Figure 5 shows the performance of different portfolios including gold and Bitcoin since July 2014:

We find that portfolio 5 (55/35/5/5) generates the highest returns and Sharpe ratio of 11% and 1.17, for slightly higher 6M and 12M max drawdowns. We understand that owning 5 percent of gold and 5 percent of Bitcoin in a portfolio may sound very aggressive, but what will happen to the traditional 60/40 portfolio when inflation starts to rise? Although some investors may argue that inflation will never be a problem in the future, you cannot assign a zero probability to that scenario. Hence, holding inflation hedges such as gold, Bitcoin, real estate or inflation-link bonds will be crucial.

To conclude, the recent selloff in Bitcoin should not be perceived as a repeat of the 2017/2018 consolidation; it was clear that the cryptocurrency was going to retrace lower at some point given the significant rise it has experienced in the past few months. We are still bullish in the long run and think that any short-term retracement should be consider as a ‘buy the dip’ opportunity. Despite the positive news on the vaccine, social distancing measures will remain for a while and therefore economies will strongly rely on governments’ support in the 12 to 24 months, which will constantly increase the money supply and therefore support Bitcoin prices.

Disclosure: I am/we are long BTC-USD, EURUSD, GBPUSD. I wrote this article myself, and it expresses my own opinions. I am not receiving compensation for it (other than from Seeking Alpha). I have no business relationship with any company whose stock is mentioned in this article.