WTI crude oil prices edged up higher on US presidential election day as the American Petroleum Institute (API) reported a 8.01–million–barrel draw from crude inventoryfor the week ending October 30th. This contracted forecasts calling for a 0.89 million rise. Oil prices were also buoyed by a potential delay in production hikes among OPEC+ members as Russia and Saudi Arabia lead talks about plans to rein output.

Crude oil prices reboundedto US$ 38.77 from a five-month low of US$ 34.60 seen earlier this week. Meanwhile, traders are waiting for results of the US presidential election, which may have some impact on oil prices. A Democratic sweep outcome may favor green energy over fossil fuels, whereas a Trump-win scenario may support oil prices to some extent.

The EIA DOE crude oil inventory report is due to be released later today. Analysts foresee an 0.89-million-barrel build in stockpiles. The historic negative correlation between crude oil prices and DOE inventory changes can be viewed in the chart below. A much larger-than-expected rise in stockpiles may weigh on oil prices, whereas a larger draw may result in the opposite.

In the near term, supply may continue to outpace demand as a second viral wave sweeps most parts of the EU and the US. More than 6 million new Covid-19 cases were reported worldwide in the last 14 days, marking a record high. More stringent lockdown measures introduced in several European countries may have a significant impact on global energy demand in the winter. 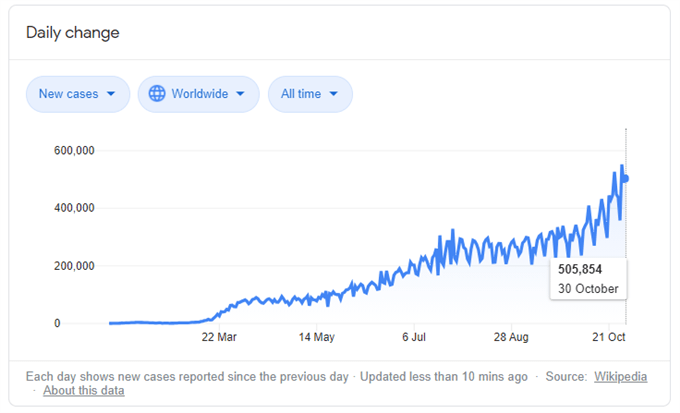 This week’s Baker Hughes report showed that the total number of active oil rigs in North America is still rising (table below), which may point to higher upstream supplies. The number of oil rigs in the United States increased by 9 to 296, while Canada’s rig count rose by 3 to 86 in the week ending October 30th. 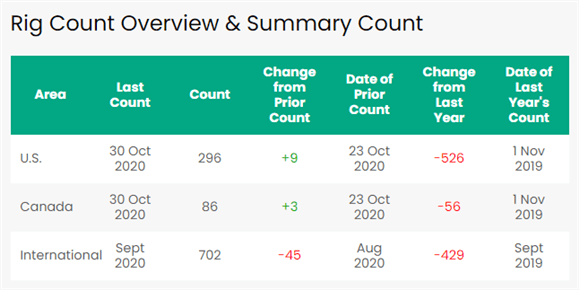 Technically,WTI crude oil prices climbed for a third day after hitting a five-month low of US$ 34.6 earlier this week. Upward momentum appears to be strong as the MACD indicator is about to form a “Golden Cross”. An immediate resistance level can be found at US$ 39.20, where the 20-Day and 50-Day Simple Moving Average (SMA) lines overlap. An immediate support level could be found at US$ 36.4 – the 23.6% Fibonacci retracement. 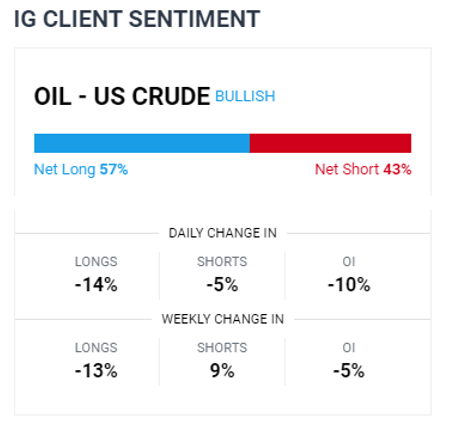