iShares MSCI Mexico ETF (EWW) provides investors with direct, targeted exposure to a broad range of Mexican companies; the ETF seeks to track the investment results of a broad-based index of Mexican equities. The fund is rather diversified, although the largest allocations are as shown below; America Movil L (AMXL) is weighted at 16.60% of the fund, while Walmart de Mexico V (WALMEX) and FEMSA (FEMSAUBD), which are consumer staples stocks, together represent 18.87% of the fund. Other large allocations are made to companies in the sectors of Financials, Materials, and Industrials.

(Source: iShares.com. The same applies to the sector breakdown; see below.)

For good measure, I present the chart below which illustrates the fund’s exposure to various sectors. In aggregate, Consumer Staples takes the lead, followed by Communication, Materials, Financials, and Industrials. 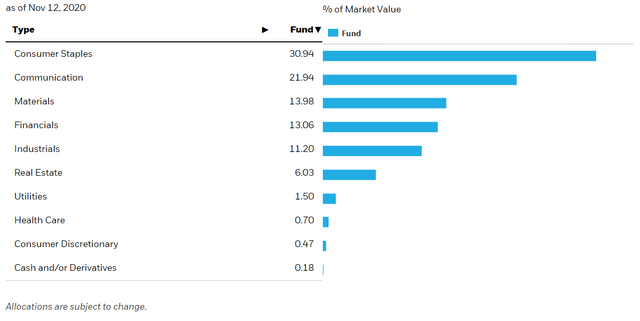 With Consumer Staples and Communication being “front and center”, representing over 50% of the fund by their combined weighting, EWW is not only ‘long Mexico’ but ‘long the Mexican consumer’. Arguably this is the case for all geographic funds since consumers are typically the backbone of any economy (the constituents of aggregate demand being consumer spending, investment, government spending, and exports net of imports).

The Mexican consumer finds themselves in a particularly unequal society. The Gini coefficient, which is a measure of the dispersion of income (or sometimes wealth) within a nation, was recorded as being 0.46 for Mexico in 2016. This was behind only Chile, Costa Rica, and South Africa (see chart below from the OECD). 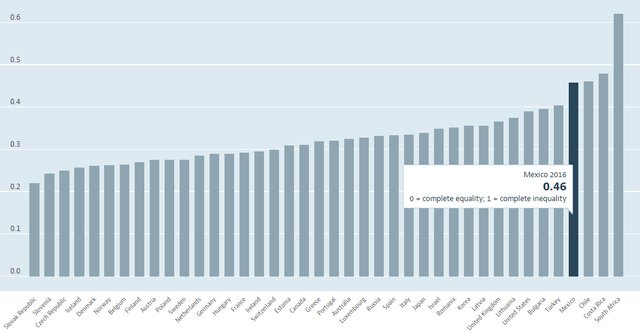 A reading of 1 indicates complete inequality, as shown above; 0 would be complete equality. Anything over 0.50 is generally considered extreme. The most unequal societies are usually less developed economies, although Hong Kong is one exception (estimated at roughly 0.54 in 2016). Economies such as the United States are not too far behind Mexico. The U.S. registered a reading of 0.39 in 2017 for instance.

Very unequal societies have implications for the health of the consumer. It is unlikely that an economy will out-perform others unless the consumer, the backbone of all modern and developed economies, is fundamentally healthy (and ideally wealthy; consumer spending tends to fall when household wealth falls, which is unsurprising).

In Mexico, the median disposable income (current prices) was 57,571 Mexican pesos in 2016 (source: OECD). In 2016, the USD/MXN exchange rate was circa 19 (say, on average), which would indicate a median disposable income of $3,030 in USD terms. GDP per capita was roughly $8,740 in that same year (source: World Bank). We can therefore divide the former into the latter, to find a ratio of approximately 35% (just over a third). This serves as an alternative measure of inequality in a sense; the stronger it is, the more powerful the consumer is. The median is more important than the mean.

The same measure for the U.S. is calculated by taking the $35,600 median disposable income in the U.S. for 2017 (the most recent measure, per OECD data as referenced in the above paragraph), and dividing this into the 2017 figure for GDP per capita of $59,928 (World Bank data). The ratio here is over 59%, which indicates a ‘favorable delta’ (for the U.S., at least) of a full 24 percentage points. In other words, Mexico is certainly more unequal than the U.S. (judging by median disposable income relative to GDP per capita, as well as the Gini coefficient), and the Mexican consumer is, therefore, less well off.

GDP per capita, adjusted for Purchasing Power Parity (current international $), has also increased more rapidly in the United States versus Mexico (see below) since 1990. 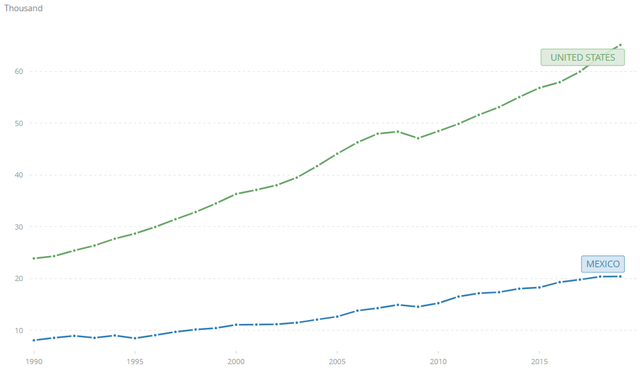 The U.S. has surged by 2.73x over this timeline, whereas Mexico has risen by 2.53x over this period, which is not particularly impressive given Mexico’s emerging market status.

However, it is not all bad. Mexico does seem to have a few demographical advantages. Generally speaking, a younger, faster-growing population presents a more propitious long-term investment opportunity than an older, slow-growing population (such as Japan, which has been characterized as such, with low long-term growth, inflation, and interest rates).

Per CIA data, the median age in Mexico is 29.3 (last data available), as compared to the United States’ median age of 38.5. Meanwhile, per World Bank data, the Mexican population grew by 1.1% in 2019, as compared to U.S. population growth of just 0.5% in that same year (it is noteworthy that the growth rate in both cases has declined considerably over time, however, although this is a worldwide trend).

Returning back to EWW: the fund has existed since 1996. A popular ETF for tracking U.S. equities is SPDR S&P 500 ETF Trust (SPY). The chart below maps the ratio between EWW and SPY; i.e., a rising ratio indicates out-performance and vice versa. As international capital flows seem to often follow cycles over the long term, I also take the liberty of adding lines to demarcate the prior low and prior high and illustrate that the long-term low of this measure (in 1998) has not quite (yet?) been reached in recent times.

Mexican equities, or at least EWW, have however clearly under-performed U.S. equities, or SPY in this case. This excludes dividends.

EWW has been far more volatile over this period than SPY though. The shape of the chart above seems to take its shape primarily as a function of EWW price action (see the EWW chart below).

EWW appears to have been in a bear market since the beginning of 2013. Timing the reversal is not likely to be easy, presuming that there will be a reversal. The recent upturn this year only follows a deep low than was achieved in Q1 2020, when global equities sold off in reaction to the COVID-19 pandemic and ensuing economic crisis. While EWW has rebounded significantly from the low, the fund is still trading well below the January 2020 opening price. As far as we are concerned, the long-term bear market remains intact.

In a recent article covering iShares MSCI Turkey ETF (TUR), I noted the importance of consumer and business confidence. The chart below shows both for Mexico since the early years of this century.

The relationship between the two is clearly positive, as one would expect, although neither is a particularly good leading indicator of the other. They move in tandem, and both consumer confidence (blue line; left y-axis) and business confidence (black dotted line; right y-axis) indicate pessimism under the 50 mark. As shown, aside from recent optimism that was found briefly among consumers in 2018 and 2019, both Mexican consumers and businesses have been primarily pessimistic for years. Both readings have returned to either new lows or close to all-time lows in recent years.

As an emerging market, you might think that perhaps the economy has a strong current account. While EWW is primarily exposed to consumer businesses, a strong current account could indicate the potential for GDP out-performance and, indirectly, therefore a stronger consumer (possibly). However, this is just not the case; the Mexican current account has barely managed to achieve positive territory. It has at least achieved a surplus in a few recent quarters, but these appear exceptional.

A strong current account is what the majority of economies would prefer. Indeed, this is the problem that Switzerland is facing as I have discussed previously; the current account is what has led the Swiss National Bank to explore methods of CHF devaluation in rather creative and aggressive ways. Yet USD/MXN has generally trended upward over the years; a relatively weaker Mexican peso over the past decade has coincided with a mostly weak current account and, as we have seen, a lack of domestic confidence (and an under-performing equity market).

Since 2008, USD/MXN has risen from less than 11 MXN to as high as 25 MXN, although the pair has since fallen from its peak (this year) back down to the 20 handle. USD/MXN has the potential to weaken further (i.e., the peso could strengthen further) provided that Biden is augurated in January 2021. A Biden administration could possibly be constructive for Mexico, given the antagonism that Mexico has borne the brunt of during the Trump administration to date.

And yet, a stronger MXN is not positive for the country’s export competitiveness, nor is it positive for its equity market. While EWW is denominated in USD, its Mexican equity holdings are still affected by the exchange rate. The negative correlation between EWW (the red line) and USD/MXN (the black line) is illustrated in the chart below; indeed, EWW is almost a derivative FX trade.

The distance between the current market price and fair value is huge, suggesting a fall to “fair value” would support a surge in EWW. However, this is not quite a fair interpretation because, in the case of emerging markets such as Mexico (and you could also include countries like India here), it is important to make adjustments for GDP per capita. As The Economist explains:

The GDP-adjusted index addresses the criticism that you would expect average burger prices to be cheaper in poor countries than in rich ones because labour costs are lower.

Here, The Economist is referring to their GDP-adjusted Big Mac Index, which literally compares the prices of a McDonald’s Big Mac in different countries (considered to be a homogeneous product) to generate their own PPP model. In our OECD model, the peso is 54% undervalued. In the regular Big Mac Index, the peso is 61% undervalued (i.e., the models are roughly in harmony). However, adjusting for the GDP factor, the peso is “only” 33% undervalued. 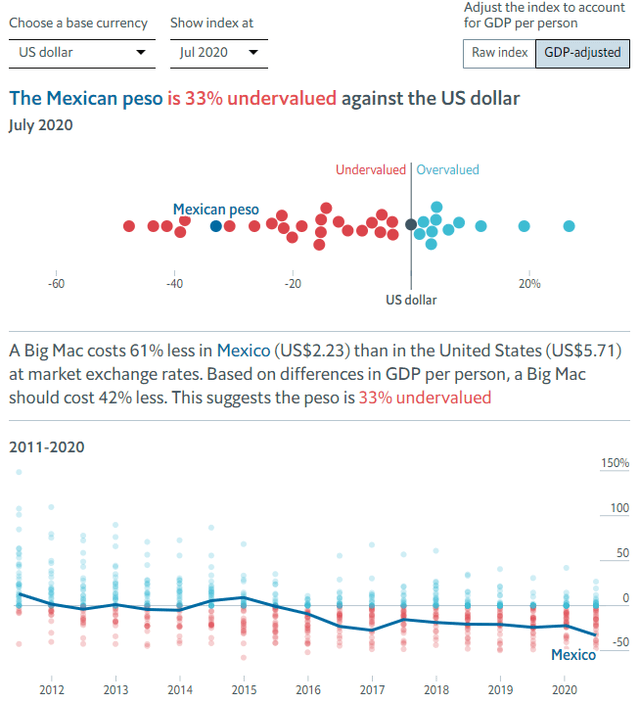 This would still suggest that USD/MXN has plenty of further room to fall. If the “fair-value gap” was filled, USD/MXN would be trading below the 14 handle (if we assume the peso is trading at a discount of 33%).

Having said all this, domestic confidence is low in Mexico, and this is likely the cause of the long-term under-performance of the Mexican economy, currency, and equity market. EWW does seem to present an opportunity from an FX perspective, but this should not be enough to justify being long since one could likely more economically trade this directly through an FX broker.

In summary, what I see here is the possibility of the Mexican peso strengthening further against the U.S. dollar, but I do not see much potential in an out-performance of Mexican equities. The sentiment is not there; the confidence is not there; and with a stronger peso, all the country’s macroeconomic indicators are likely to be even harder to support. Consumer sentiment and strength also particularly matters to the EWW fund considering its exposure to consumer-led industries. There may be an opportunity to buy into a Mexico tracker such as EWW in the long-term future, but the time does not appear to be now in my opinion, and timing is (almost) everything.