GlaxoSmithKline (GSK) (OTCPK:GLAXF) and AbbVie (ABBV) are both businesses which investors see as discounted plays offering yields rare in the pharma space, especially among biopharma players. Naturally, there are reasons for their discounts, which are as simple as their respective legacy products falling victim to generics competition. At the moment, GSK is suffering more from declines in its legacy products, whereas ABBV’s Humira is saved by its US presence, which is still thoroughly protected by a web of patents which will last in a meaningful way till 2023. They are similar in many other ways too, with similar capital return metrics and valuations. But it is for the ways in which they differ that we prefer one over the other. We think that ABBV doesn’t suffer many problems in the long term, even with many of the products that it took onboard with the Allergan acquisition which are deferrable. But we prefer GSK for its slightly higher dividend safety and its targeting of less crowded markets with a distinctly more organic approach. Moreover, the worst is still to come for ABBV in 2023 when its US Humira patents collapse and with a Biden win and potential accompanying tax hikes, to which ABBV is more exposed than GSK. With the GSK debt outlook also looking much better because of its anticipated consumer healthcare spin-off which will take a disproportionate amount of the debt load, and with potential tailwinds for its co-circulation mitigating vaccines, we would rather move on with it as a buy.

Oncology is definitely an exciting market from the pharma company perspective. There are opportunities for combination treatments, different indications for adjuvant and first-line, and many lines of attack with some drugs acting as PARP1/PARP2 or PD-1 inhibitors and others using CAR-T. Overall, there is a lot of interest in the market with many drugs being developed and already occupying the space. The thing is almost every major biopharma company is making very robust attempts to get involved, with incumbents like Bristol-Myers (BMY) and others already dominating areas in the space. It’s getting increasingly crowded, and latecomers will suffer since so many of the technologies are becoming well explored. In terms of relative pipelines and current exposures, ABBV is the one that is probably chasing this market much more aggressively. Both Imbruvica and Venclexta are managing promising growth for Hematologic cancer, and the company is aggressively pushing for these drugs in more indications.

Although we think that room for growth remains in oncology and ABBV, we prefer the approach of GSK which is making select organic and inorganic efforts to get a foothold in parts of the market, with Zejula being a successful pickup from the Tesaro acquisition, and dostarlimab being a promising PD-1 treatment for endometrial cancer. With less focus on Oncology, GSK is also spreading its bets in markets like HIV, where its competition will include the remaining growth engine of the Gilead (GILD) portfolio, Biktarvy, as well as colitis, nasal polyps, STIs, and lupus with its very successful pickup of Benlysta in combination with Rituxan, which is critical in GSK’s claim to autoimmune indications. Notably, it is doing well in orphan drug indications with Nucala. It is even gunning for rheumatoid arthritis, which will loosen up in the US once the Humira reign ends. With good autoimmune expertise, it may well claim share here too. Of course, it will have to fight ABBV which is rapidly pushing Skyrizi and Rinvoq to remain dominant in the RA and autoimmune inflammation treatment areas. Overall, we prefer to see hedged bets rather than very heavy efforts in the oncology market where more established players running extensive cancer platforms need to work less incrementally to expand the reach of their treatments, like BMY. Growth expectations are high if investors think that it’s likely that ABBV can offset the oncoming 2023 Humira decline with Oncology growth, which will be getting more crowded every year.

Another reason why we like GSK is because of its vaccine portfolio. Although Shingrix is lagging a bit right now in a recovery, where people have more pressing concerns than shingles, it is still a valuable product. Moreover, GSK vaccines that will be helpful in managing co-circulation risks are already seeing increased growth. The Flu vaccine sales increased around 20% YoY, with its pneumococcal meningitis vaccine also staying strong despite reduced physician visits this year. Margins in this segment are superb at a normalised 50% operating margin, and once Shingrix sustains a robust recovery, those margins should begin to return to this segment from around the 44% mark.

We also generally prefer GSK’s dividend situation. Firstly, it performs slightly better than ABBV on the payout metrics, and with the generics erosion already taking effect now, we have a better picture of how badly the dividend might be pressured. On the other hand, ABBV has yet to see the full pressure on its Humira business in the US, where one of the best-selling drugs ever will finally be open to toppling. Below we provide the current figures on valuation and leverage based on TTM financial data up to Q3, including all relevant liabilities in the EV. 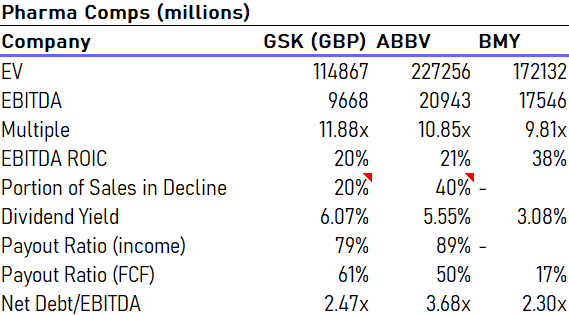 GSK is also less indebted, thanks primarily to its more conservative inorganic growth activities compared to ABBV. Ultimately, this debt load will fall even further when it spins off its consumer healthcare business, which according to management will take a disproportionate amount of the GSK debt sustaining a leverage ratio around the 3.5-4x mark over EBITDA. A higher debt load on ABBV will cost it more as it commits to its current capital allocation policy, with the largely deferrable portfolio obtained from Allergan still being a hazard in the COVID-19 environment, where vaccine rollout timelines remain unclear. With the Humira fall-off coming soon after the end of the COVID-19 crisis, we think that leverage will play a magnified role in future dividend safety and balance sheet health.

We rather like both the businesses, although we think there is more hazard involved for ABBV investors. It’s true that parts of its portfolio seem to have a better growth profile than most of GSK, but we think that GSK is generally more resilient, and with generics erosion already taking place, we have a better idea of the stress on its cash flow generation. There will be a lot of moving parts for ABBV to maintain a status quo, with the Allergan acquisition, although sound in the long term, having been timed poorly for the COVID-19 environment and oncology likely to get more competitive as the Humira expirations approach. GSK is still discounted for a reason though, as the rate of generics erosion could be volatile. However, its pressured biopharma business has offsets in other areas, including a recovering vaccine business and the consumer healthcare business, which still remains a part of GSK for the time being.

Additionally, the GSK multiple looks attractive, since it’s not far above the ABBV multiple with GSK at 11.9x against ABBV’s 10.9x EV/EBITDA multiple. Considering that the EBITDA base for GSK is already being damaged by generics impacts, while ABBV’s is being damaged by its aesthetics businesses acquired from Allergan, we think a greater premium for GSK could perhaps be justified given the incoming drop-off of Humira, which should depress the ABBV multiple on the basis of weaker growth expectations, or at the very least uncertainty about future cash flows coming from ABBV’s main drug. The yield also looks good lying at similar, though slightly higher, levels than ABBV. Ultimately, because of the uncertain pressures that ABBV’s cash flows will face, despite making forays into more exciting markets like oncology, we’d prefer to go with GSK, a devil we know better, with fewer risks relating to treatment market forays, more understood cash flows, vaccine tailwinds and finally a more healthy balance sheet and dividend.