Financial markets were wobbling throughout much of yesterday as polls started from suggesting that Democratic nominee Joe Biden will take the White House to growing premonitions that it may be a tight race. Risk aversion started to accelerate after votes in Florida, a perennial swing-state in US elections for decades – was beginning to turn red.

Shortly after Wall Street close, reports crossed the wires that Joe Biden won key swing state Michigan. The big question for markets continues to be Nevada and Arizona where Biden is leading at 49.3% and 51% with Trump only behind at 48.7% and 47.6%, respectively. If the former Vice President is able to get Nevada and Arizona, the presidency will be his even if Trump takes North Carolina, Georgia and Pennsylvania. This will bring his electoral count to the 270-winning threshold.

Ultimately, the key takeaway is uncertainty over which candidate will prevail. Market price action suggests investors are comparatively more fond of Biden than Trump. With the latter being viewed as a risk, at least if he is elected traders can identify what the risk is and allocate assets within their portfolio to be optimized in the new environment. However, if the outcome is unclear, traders are left in limbo.

The S&P 500 sprung up past the inflection point at 3391.75 which had originally functioned as the top earlier this year before the index along with its peers collapsed. With the election now, the benchmark may continue to rise if the polls show Biden narrowing the gap. In that scenario, it is not outlandish to suggest that the S&P may retest the prior swing-high at 3541.00. 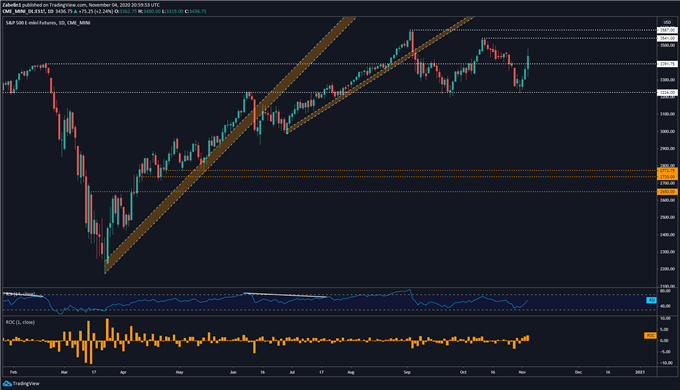 Gold Price Outlook: Gold fell beneath $1,800 for the first time since mid-July last week despite USD weakness While the fundamental landscape remains largely unchanged, the technical break might undermine the metal’s bullish outlook If […]