Shares of ProPhase Labs have been on the move recently. Since September 1st, they have soared higher – from about $2.70 to recent intraday prices of over $10 per share. This is an entirely hype based move. Holders should strongly consider selling, and those with an appetite for it may even consider going short.

Several years ago I published an article on SeekingAlpha which discussed ProPhase Labs (PRPH), at the time the producer of the cold remedy Cold-EEZE. I noted that although I was a big fan of the product, the company hadn’t shown much ability to grow the brand. Plus, its products in development didn’t seem too promising. I suggested readers stay away.

It turned out that management agreed with my sentiment on Cold-EEZE, but as a result, my hypothesis about shares didn’t work out. CEO Ted Karkus shared his thinking at the ASPIRE Dealmakers conference last year where he said of owning a single major brand, “it just created a situation where obviously we were losing money, it was inefficient. So it was either add more products and leverage the overhead or sell the brand.” He sold.

Mylan (MYL) bought the brand for $50 million plus entered into an agreement with ProPhase to continue manufacturing Cold-EEZE lozenges at their facility (more on this later). ProPhase shareholders were rewarded over the next few years with special cash dividends valued at nearly the amount shares were trading at when I made my post. They also retained ownership over what remained of the company.

The surviving ProPhase Labs consists of a lozenge manufacturing plant and the aforementioned developmental products. Neither of these are great businesses. Since the lozenges business is still largely dependent on Cold-EEZE it is both seasonal and unreliable. In years with low incidence of cold and flu, revenues falter. In good years, revenues have been better, but they aren’t making higher highs.

As one would expect, this action was driven entirely by the severity of the flu. Sick people buy Cold-EEZE, and the 2018 flu season was the worst in a decade. So, how much does ProPhase rake in when they do have a good year? Nothing. Even in the 2018 the company totaled a loss of fourteen cents per share.

How about the developmental products? Astute readers may have noticed the retail line on the year over year revenue statements I provided was not correlated with manufacturing. Although small, it doubled in 2018 and doubled again in 2019. Is this something that shareholders should be excited about? I would argue it is not.

ProPhase manufactures a line of products under the TK Supplements brand. The flagship product is called Legendz XL and purports to provide male sexual enhancement.

On the qualitative side, these products just don’t seem like something the market will be excited about. They’re just commodity ‘supplements’ that someone might pick up on a whim. 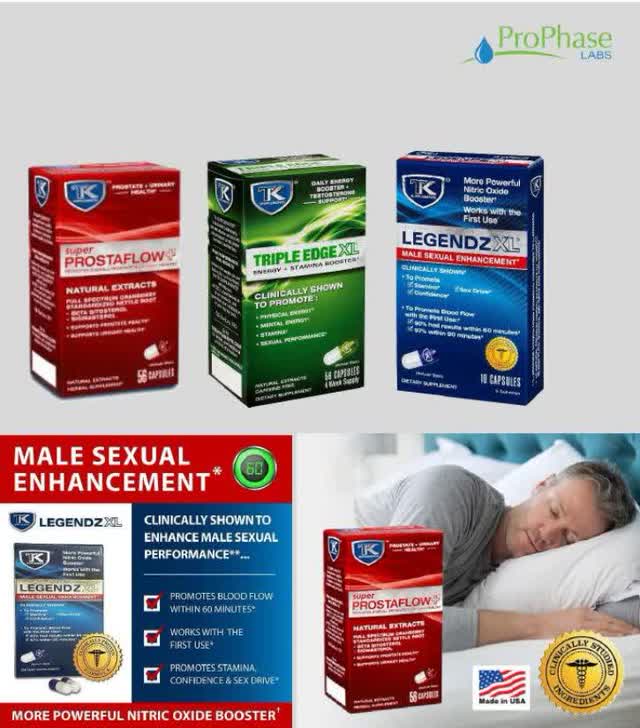 The latest company investor presentation from October mentions major retail placements. Product was scheduled to being hitting shelves at Walmart and CVS last month. This will of course boost sales, but growth will be incremental, not exponential. I don’t think the products have momentum for two main reasons.

First, the doubling of sales has stopped. Retail sales were down in the first half of 2020.

Could this be a COVID headwind? That’s unlikely. If explosive growth were continuing pre-COVID, Q1 numbers should at least have been up since it was really only March that was impacted. Instead Q1 retail sales were down about 15%. Either way, that’s not the only evidence.

Back in December of 2019, ProPhase began waving the white flag on their products. The company had previously set up a marketing agency for direct sales of TK Supplements. During the fourth quarter of 2019, they shut it down citing, “The underperformance of expected sales levels for our TK Supplements product line.”

Pre-COVID that’s the company. One that can’t really make money in the best years for its legacy business and whose growth initiatives are stagnating. At the time, the company shares were vacillating between $1.75 and $2.00, so this was a fine valuation. That puts the market cap around $20 million.

One final thing to keep in mind before addressing post-COVID ProPhase. Mylan is obligated to use the old Cold-EEZE manufacturing facility for their lozenges for a minimum of five years. It’s already been more than three. The agreement expires March 29, 2022.

If Mylan were to pull out rather than renew, that would be devastating to ProPhase. Their significant customer disclosure shows they only have a few clients, “Three third-party contract manufacturing customers accounted for 36.5%, 30.5% and 11.1%, respectively, of Fiscal 2019 revenues from continuing operations.” They don’t say which is Mylan, but I would be surprised if it weren’t one of the top two.

If 2018 was the worst flu season in a decade and the company did relatively well, how is it doing in 2020 with a pandemic raging? I would categorize it as good but not great. In Q2 2020, the company put up one of its best revenue quarters ever. It wasn’t a blowout number, but earnings just squeaked into the positives, netting one penny per share. The market rewarded this performance and share price hopped from around $2.00 to $2.75. Then everything went berserk. 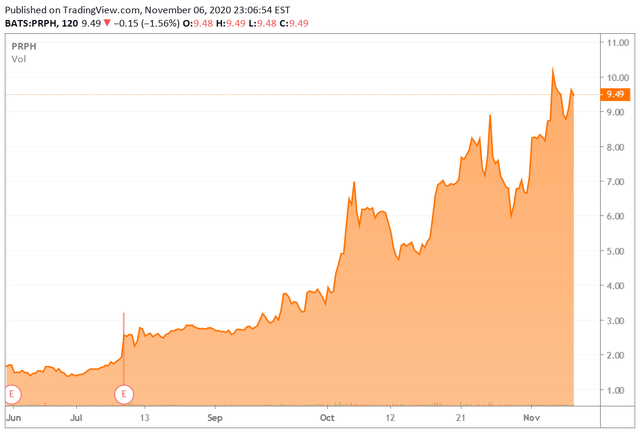 In mid-September ProPhase raised cash via both debt and establishing an ATM offering without tipping their hand as to its intended use. Two weeks later, they announced they were looking to acquire a lab for COVID testing. Soon after, on October 23rd, ProPhase entered into a definitive agreement to do just that, purchasing Confucius Labs. Today, Nov 6th, the market cap of the company is $111 million.

The new valuation hearkens back to the days of when Long Island Iced tea became Long Island Block Chain. Attach yourself to the hot new thing and watch your share price soar… for a while. Or for a more recent reference, look at the charts of some of the electric car companies going public via SPACs.

ProPhase isn’t even new at this game. After selling the Cold-EEZE brand, the company attempted to secure a marijuana license in Pennsylvania to cash in on that trend.

To be clear, it’s not that ProPhase can’t run as successful COVID testing lab. It’s that the market is acting as if they’re already up and running and cash is pouring into the coffers. The deal is an all cash transaction for $2.5 million. The market cap has increased by 75 million.

There are so many questions that come to mind. Here are just a few.

If this was such a good idea, why isn’t the current lab operator doing it? The entirety of ProPhase’s plan appears to be to upgrade the facility’s equipment and expand staffing as necessary. The owner of Confusius Labs, Arvind Gurnani is, “an experienced entrepreneur in this space who also runs two similar labs.” Surely, he knows the space better than anyone at ProPhase could. If it was going to be so extraordinarily lucrative to buy new equipment and go for it, what are the odds he would have passed up the opportunity?

Does ProPhase have some special synergy to offer via their staff or operational expertise? Not so. The existing lab staff are all going to remain in place, “Mr. Gurnani has agreed to provide transition services, including continued operational oversight of the lab. The current lab director, lab manager and all employees of the lab are expected to remain employed by the lab.” As for expertise in the subject matter, the best CEO Karkus could do in his business update is mention that, “ProPhase Labs has long been focused on respiratory health.” This is true, but it’s also like a chef saying he thinks he can be a successful farmer because he works with vegetables.

How can the market be buying Karkus’ projections? The equipment literally hasn’t even been delivered yet, but in the business update he casually compares ProPhase to Quest Diagnostics (DGX) and suggests they can probably match their margins. Then he makes up an expected daily throughput, multiplies, and suddenly this hypothetical version of ProPhase is a smashing success. It can’t be that easy. Or if it were, then that circles back to my original question about why the existing operator didn’t do it, or at the very least, hold out for a higher price since he surely would have had multiple bidders.

Finally, is ProPhase too late? The equipment is expected to arrive for installation in December. Then it’s a ramp up of capacity while simultaneously trying acquire clients. On Karkus’ rosy timeline, they expect to just be hitting their stride at the end of Q1. The Spanish Flu had three waves and lasted about a year. What if COVID19 is similar? The lab has additional diagnostic capabilities, so it’s not useless in a post-pandemic world, but that’s where all the value is coming from.

ProPhase is a $20-30 million dollar company that in the best of times can just barely turn a profit. Their retail products are generic and underperformed to the point that they shuttered their marketing subsidiary. Their lozenge business ebbs and flows and could be annihilated if Mylan drops them in 2022.

The move into diagnostics via the purchase of Confucius Labs may prove savvy, but the market has responded irrationally. I would be blown away if the company isn’t selling shares into the market at this price through their ATM and I think it would be wise for you to do so as well.

Whether to short or not is a trickier proposition. On the one hand, it’s obvious that the share price has come too far too fast. However, this has the potential to be a widow-maker. ProPhase has plenty of cash, and if they’re selling shares, they are accumulating more of it every day. What if they buy another lab? Prophase says, “We are also continuing our search for additional acquisition opportunities that will expand our testing capabilities, and we will seek out new sources of business for Confucius Labs and for any other diagnostics businesses we acquire.” If one diagnostics business acquisition is worth tens of millions, there’s no reason why the next one won’t be as well.

Disclosure: I am/we are short PRPH. I wrote this article myself, and it expresses my own opinions. I am not receiving compensation for it (other than from Seeking Alpha). I have no business relationship with any company whose stock is mentioned in this article.