Post-US election, the Canadian Dollar (CAD) has gained roughly 2.75% against the US Dollar. This comes on the back of expectation around eased trade duties which were increased during the Trump administration. As of this week, this expectation has now become reality with the U.S. Department of Commerce setting a new duty rate of 8.9% on average for softwood lumber imports from Canada – previously 20.2%. While this is a step in the right direction from a Canadian perspective, the Canadian international trade minister Mary Ng is calling for further reduction as they are deemed “unwarranted and unfair”. The softwood lumber tariff cut could be a sign of further cuts across other industries such as steel and aluminum which could have positive implications for the local currency.

Oil (a major Canadian export) price resurgence has reflected positively for the loonie as the currency is known for its historic positive correlation with oil. As COVID-19 vaccines are gaining in effectiveness (%), markets are expectant of upcoming economic revivals and trade which are reflective in markets such as oil. This bodes well for the Canadian Dollar (long-term) as oil is likely to continue its rise once vaccines are finalized and distributed.

Trader’s Toolbox: How to Identify Price Trends with Trader Sentiment 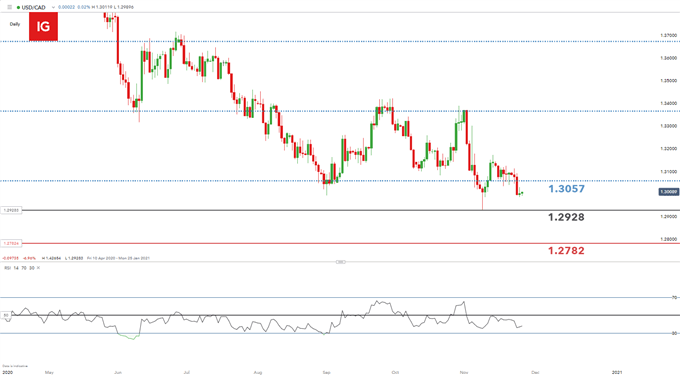 USD/CAD is trading firmly between the 1.3057 (61.8% Fibonacci level) and 1.2928 support swing low on November 9, 2020. The Relative Strength Indicator (RSI) is gradually approaching oversold territory which may mean an extension of the recent downward move. Initial support would come from the 1.2928 swing low. A break below could lead to further downside with the previous low (1.2782) tracking back to 1 October, 2018.

There is also a chance that the 1.2928 support holds firm and is then followed by a move higher towards resistance at 1.3057.

The economic calendar has no further high impact events this week but next week could provide significant price volatility on the USD/CAD pair should Canadian GDP deviate significantly from estimates. Q3 figures are expected to be markedly higher than Q2 with eased lockdown restrictions and government support.

Learn more on how to trade the news!

USD/CAD has been trading with an established short-term downward bias which could be sustained leading up to the Canadian GDP announcement next week. Positive GDP data may supplement further downward pressure which could lead to multi-year lows.

IGCS shows retail traders are currently prominently long on USD/CAD, with 75% of traders currently holding long positions (as of this writing). At DailyFX we typically take a contrarian view to crowd sentiment, and the fact traders are net-long is suggestive of a sustained bearish outlook however, with a higher net change in short positions relative to long positions by retail traders, the outlook is of a mixed disposition.