AVROBIO (AVRO) is a gene therapy company in early clinical stages of development. It has its lead asset, AVR-RD-01, targeting Fabry disease in a phase 2 trial, where dosing has already begun. It has a couple more phase 1/2 trials running in Gaucher disease type 1 and cystinosis. Other assets are preclinical.

AVROBIO’s gene therapy platform is called plato. AVROBIO is targeting lysosomal disorders where a mutated gene causes a particular enzyme to be missing or reduced from the body. Current standard of care is enzyme replacement therapy or ERT. which basically periodically replenishes the missing enzyme to the body. Patients have to stay under ERT their entire lives – ERT is not curative. In gene therapy, however, AVROBIO replaces the mutant gene with a functional copy, called a transgene, which then produces the correct enzyme. This is a one time therapy.

First, in a process that is called peripheral bloodstream stem cell harvesting, stem cells that reside in the bone marrow are mobilized, usually using a drug like Neupogen, to move into the bloodstream. Then blood from the patient is passed through a machine in a process known as apheresis, and stem cells are extracted from the blood. These stem cells are then enriched for CD34+, which assists in cell migration and is a basic step in all heme transplants. “These are used to make the therapy because they are capable of taking up residence, or engrafting, in the bone marrow and producing trillions of daughter cells.”

Now comes the actual work of the platform. It introduces a therapeutic gene, also known as a transgene, as a replacement for the mutated gene, into the stem cell, using a lentiviral vector. This transgene is meant to produce the missing enzyme in the body. The lentiviral vector is a modified virus stripped of its disease-causing ability, which can function as a delivery mechanism for genes into chromosomes.

As we can understand from the above diagram, the differentiating factor here is ease of use and improvement in quality of life; however, the permanent nature of the solution may also have efficacy effects. The issue that AVROBIO has to address is safety. ERT is a proven therapy with limited safety problems, whereas gene therapy is associated with infection and other issues. On the other hand, ERT also has limitations. A study of a subset of patients undergoing ERT had the following data:

AVR-RD-01 is a single infusion gene therapy for Fabry Disease which will have lifelong duration of efficacy. It has been granted orphan drug designation in the US. Patients will not need further ERT or other chaperone therapy, nor any concomitant medication – they will be cured of the disease. If it works as planned, the therapy will save millions of dollars in treatment costs. The therapy is to be suitable for all age groups and any mutation, and will be able to reach hard-to-reach organs like the brain.

The company has two trials running. One in Canada is a phase 1 trial that has dosed 5 patients. The other, FAB-GT, is a phase 2 trial begun in December 2019 in the US, Australia and Canada that has dosed four treatment-naive patients so far.

In its recent R&D Day on November 17, the company provided the following post-infusion assessment data:

This data only gives the duration post infusion; it does not provide how the patient is faring and if he is requiring other treatment, or if he is ERT-independent now. Given the profile of the therapy, however, I am guessing these patients needed neither ERT nor any other chaperone therapy post-infusion.

More such long duration therapy sustenance data is given in the following two charts:

Plasma lyso-GB3 is a biomarker for Fabry Disease patients under ERT therapy, and its reduction implies a reduction in disease burden.

The therapy showed tolerable and manageable safety profile so far. There were two grade 3-4 AEs that were related to the conditioning regimen which used Bu90-TCI. These were transient and subsided within a few days, showing the clear advantage of the regimen.

The following are the next steps in this indication: 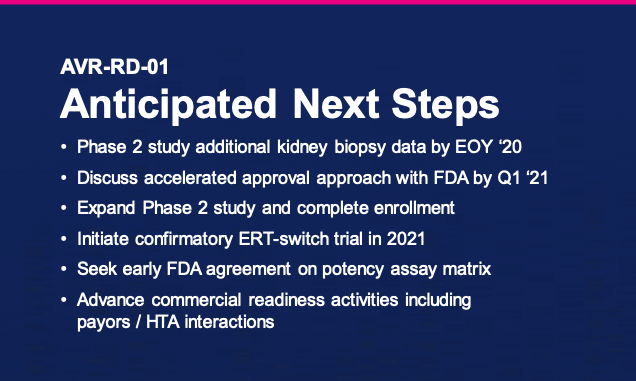 If the drug gets accelerated approval, then we would expect it to be in the market in 2022-23.

The company produced the following schematic in its latest R&D Day: 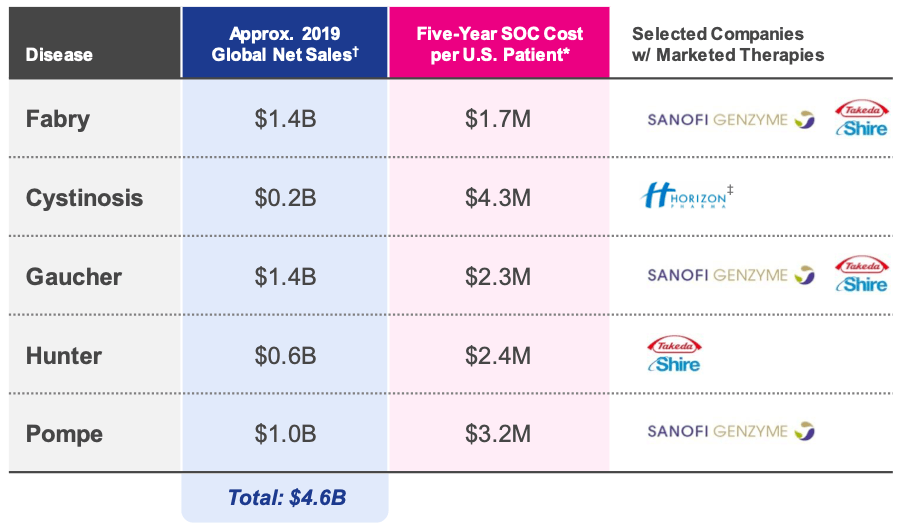 Fabry Disease is a rare debilitating genetic lysosomal disorder in which the lysosomal enzyme, α-galactosidase A (α-Gal A), is absent or has markedly deficient activity. This causes lipid buildup in blood vessels and internal organs, ultimately causing renal failure, cardiac disease and death. Other symptoms “include acroparesthesias (excruciating pain in the hands and feet which occur with exercise, fevers, stress, etc.); angiokeratomas (clusters of red to blue rash-like discolorations on the skin); anhidrosis or hypohidrosis (absent or markedly decreased sweating); gastrointestinal symptoms including abdominal pain and cramping, and frequent bowel movements; and a characteristic corneal dystrophy (star-burst pattern of the cornea seen by an slit-lamp ophthalmologic examination) that does not affect vision. With increasing age, the systemic GL-3/Gb3 deposition, especially in the heart leads to arrhythmias, left ventricular hypertrophy (LVH) and then hypertrophic cardiomyopathy (HCM), and in the kidneys to progressive proteinuria, renal insufficiency, and renal failure, and/or to cerebrovascular disease including transient ischemic attacks (TIAs) and strokes. Prior to renal replacement therapy (i.e., dialysis and transplantation) and enzyme replacement therapy (ERT), the average age of death of affected males with the type 1 classic phenotype was ~40 years.”

There are two subsets of Fabry Disease, types 1 and 2. The incidence of males with the type 1 classic phenotype is about 1 in 40,000 while for the type 2 late-onset disease it is at least 5-10 times more frequent than that of the type 1 males. Clinical difference between the two types is that type 2 patients do not show symptoms in early childhood or adolescence, but only in the third to seventh decades of their lives.

There are about 3000 US patients diagnosed with the disease. Given the prices of other therapies, lifetime costs, orphan drug status and curative approach, AVROBIO can price its therapy at upto $1mn. If so, we are looking at a TAM of $3bn in Fabry alone. A similar market exists for Gaucher’s Disease, and a somewhat smaller one for cystinosis.

Sanofi’s (SNY) Fabrazyme is the only US-approved recombinant ERT in the market. In Europe and elsewhere, Replagal from Shire Plc, now owned by Takeda, is also available.

An oral therapy, Galafold (migalastat, Amicus Therapeutics), which is a chaperone therapy designed to enhance the residual enzymatic activity of certain missense mutations, was approved in the US in 2018.

A few gene therapies for Fabry Disease are in pipeline stages. AVROBIO seems to be in the lead. Other companies include Sangamo Therapeutics (SGMO).

The competitive difference is durability of treatment. As Chief executive Geoff MacKay said, “the million dollar question about durability gets answered over time. For our first patient, we now see effect going out 28 months… It’s not the definitive answer, but 28 months is starting to give investors reassurance that it’s credible to think that some long-term engraftment has happened in the bone marrow. It’s unlikely that short-term progenitor cells would still be producing an effect going out 28 months.”

AVROBIO has a market cap of $600mn and a cash balance of $200mn as of the previous quarter. They just recently closed a public secondary offering in November, netting $75mn. That will be adequate cash until 2022, given the $20mn quarterly burn which will probably increase as we progress towards the market.

The company is largely institution owned:

The company has the following clinical collaborations:

The Magenta collaboration is recent and we covered it in May.

In terms of patents, although the company claims to have adequate coverage, I have not been able to get clarity on their AVR-RD-01 patent from published material I researched.

AVROBIO is a relatively early stage company. However, they have adequate cash to complete their trials, and their early data shows great promise to bring a curative novel therapy to an area of unmet need. Their price has taken a beating post coronavirus, and the lack of near term catalysts. This is an excellent time to pick up a pilot position in this promising gene therapy developer.

Thanks for reading. At the Total Pharma Tracker, we offer the following:-

Our Android app and website features a set of tools for DIY investors, including a work-in-progress software where you can enter any ticker and get extensive curated research material.

For investors requiring hands-on support, our in-house experts go through our tools and find the best investible stocks, complete with buy/sell strategies and alerts.

Sign up now for our free trial, request access to our tools, and find out, at no cost to you, what we can do for you.

Disclosure: I/we have no positions in any stocks mentioned, but may initiate a long position in AVRO over the next 72 hours. I wrote this article myself, and it expresses my own opinions. I am not receiving compensation for it (other than from Seeking Alpha). I have no business relationship with any company whose stock is mentioned in this article.

2/2 © Reuters. FILE PHOTO: 2019 World Economic Forum (WEF) annual meeting in Davos 2/2 By David Henry and Iain Withers (Reuters) – Working from home has been surprisingly successful for global banks during the […]