Largo Resources (OTCQX:LGORF) is a Canadian company that owns and operates a vanadium mine in Brazil. Largo is one of the biggest and lowest-cost primary vanadium producers. What is important, Largo can produce high-purity vanadium pentoxide needed for the production of batteries. Now, the company decided to take another step and become a vertically integrated battery producer. Therefore, Largo acquired several patented vanadium redox flow battery-related technologies from VionX Energy and established a new daughter company named Largo Clean Energy. The new company should address the high-capacity energy storage needs of the renewable energy industry. Moreover, Largo plans to expand its product mix by vanadium trioxide and titanium dioxide.

Largo’s Maracas Menchen vanadium mine is located in the Brazilian state of Bahia. The land package covers an area of 177 km2, but the production comes only from the Campbell pit (picture below). According to the 2020 production guidance, Largo should produce 11,750-12,500 tonnes (25.9-27.6 million lb) of V2O5, at a cash cost of $2.6-2.8/lb and a total cash cost of $3.2-3.4/lb. In Q3, Largo produced 6.8 million lb V2O5, at a total cash cost of $3.69/lb. The reserves are sufficient for another 8 years of mining at the current production levels. However, Largo is working on expanding the mine life.

There are several other known deposits (Novo Amparo, Sao Jose, Novo Amparo Norte, Gulcari a Norte, Gulcari B). During the 2019-2021 period, Largo focuses on these deposits, with an aim to expand the resources and reserves. However, as can be seen in the map below, a huge part of Largo’s property remains underexplored. The current exploration activities focus only on an approximately 30 km2 area to the north of the Campbell pit. There is only a very low risk that Largo won’t be able to expand the mine life of its operations well beyond 2030. 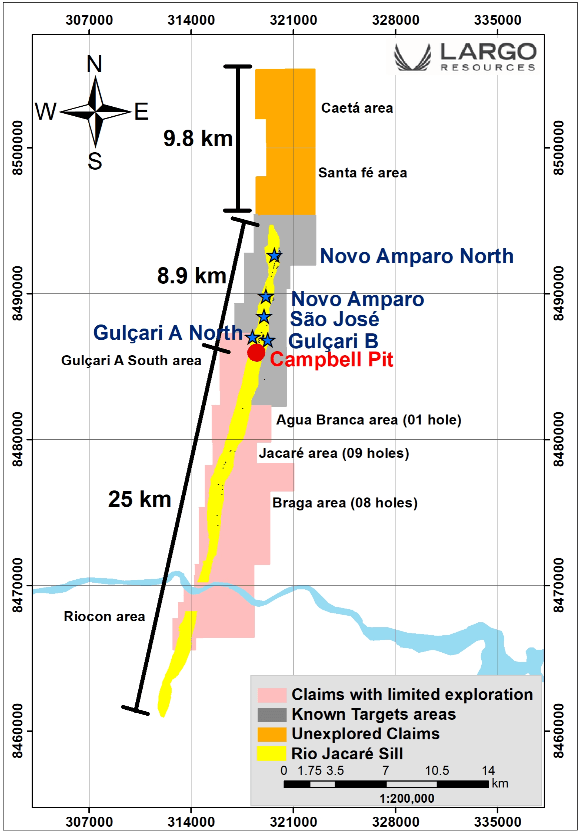 But Largo focuses also on the qualitative improvement of its operations and its product mix. Right now, Largo delivers to market standard grade vanadium pentoxide, high-purity vanadium pentoxide, and high-purity vanadium powder. However, it plans to build a ferrovanadium conversion plant that will allow it to produce ferrovanadium needed in the steelmaking industry. And also a vanadium trioxide processing plant, that will produce vanadium trioxide needed in the aerospace industry for the production of titanium alloys. The trioxide plant construction should start in Q1 2021, with the first production projected for Q3 2021. The CAPEX is estimated only at $9 million.

Largo is also considering the construction of a $124 million titanium dioxide plant to extract ilmenite concentrate and titanium dioxide from the non-magnetic tailings at Maracas. As stated by Largo’s CEO during the Q3 earnings call:

We are doing all the exploration work and we’re doing all the mining plan considering the titanium. So, it’s a huge work. It’s going to create a very strong and robust operation in Brazil, having two revenue streams. So, I cannot give you the IRR at this time. But I’m sure that you’re going to be happy when you see the final numbers by Q1 next year.

This is where Largo’s decision to enter the battery industry should help. Largo acquired 12 patent families from VionX Energy Corp. The patents will enable Largo to deploy VionX Energy’s battery systems under Largo Clean Energy’s VCHARGE± branding. Largo Clean Energy will be selling five variations of the vanadium redox flow battery, with a capacity of 4, 6, 8, 10, and 20 MWh. The life of the batteries is projected at more than 20 years. The batteries should serve especially for the renewable energetics industry, where the energy production is very cyclical and huge volumes of energy need to be stored and later distributed to the grid. 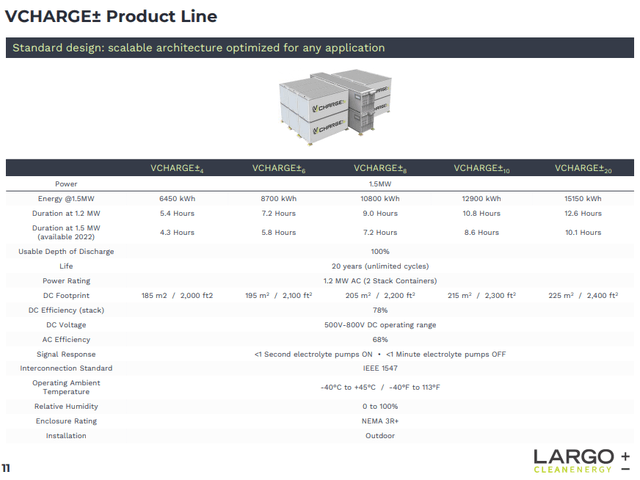 Thanks to Largo Clean Energy, Largo Resources has the chance to become a fully vertically integrated battery producer. However, no immediate miracles should be expected. Also Largo’s CEO Paulo Misk admits that Largo’s revenues will remain dependent on the steel, aerospace, and chemical industries in the near future:

Largo’s revenues will continue to be largely driven by sales in the global steel industry and high purity aerospace and chemical markets—but as vanadium demand from global VRFB deployments expands in the coming years, we expect significant growth in the VRFB sector. The launch of Largo Clean Energy also provides Largo with additional flexibility to deploy more of its high purity vanadium production into energy storage products.

Largo Resources is facing another period of low vanadium prices right now. In order to improve its market position and capture new revenue sources, it decided to enter the battery industry not only as a high-purity vanadium pentoxide producer but also as a vanadium redox flow battery producer. Although this seems like a reasonable decision, it will take some time before some meaningful results are visible.

Right now, Largo Resources has a market capitalization of $607 million. As of the end of Q3, Largo held cash and cash equivalents of $74.9 million and it had a debt of $24.8 million, which leads to an enterprise value of $557 million. This is a high price tag for a company generating operating cash flows of less than $10 million per quarter at the current V2O5 prices. Largo needs notably better financial results to justify the current valuation. Largo Clean Energy may help to reach them, but it will take time. Also the titanium dioxide production should present a significant additional revenue stream, however, in this case, not only time but also significant financial sources to cover the more than $120 million CAPEX will be needed. 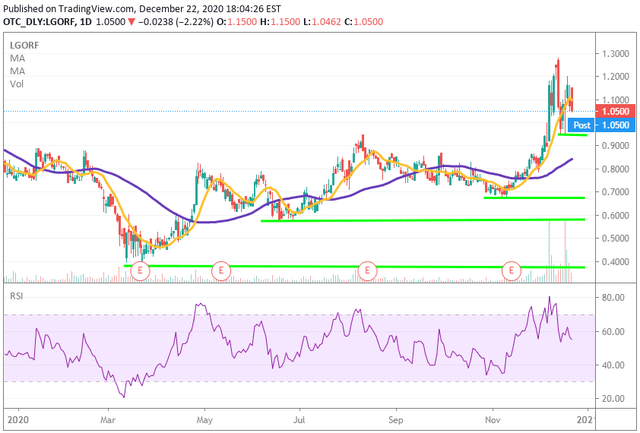 From the near-term perspective, it will be important whether the fresh support in the $0.95 area holds. If it doesn’t hold, the next one is down at $0.7. Although Largo Resources is expensive right now, I like its growth potential, whether in terms of titanium dioxide or the battery market. If the share price returns to the $0.7 level, initiating a new position will be worth considering.

Disclosure: I/we have no positions in any stocks mentioned, but may initiate a long position in LGORF over the next 72 hours. I wrote this article myself, and it expresses my own opinions. I am not receiving compensation for it (other than from Seeking Alpha). I have no business relationship with any company whose stock is mentioned in this article.

© Reuters. (Reuters) – Tesla (NASDAQ:) Inc’s vehicle registrations in the U.S. state of California jumped nearly 63% during the fourth quarter compared with last year, largely due to the success of the company’s Model […]