Small-cap healthcare provider The Joint Corp. (JYNT) has had a terrific 2020. Shares tanked initially on COVID shutdowns into March, but since then, the stock has more than 3X’d to nearly $26. With a consolidation pattern in place since early November, and outstanding growth potential, I think the stock offers long-term growth, even if the value proposition of the stock has suffered of late. 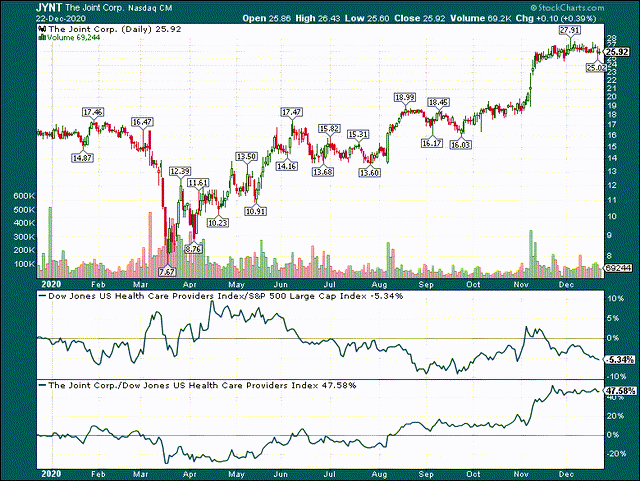 Health care providers haven’t been particularly strong this year, but JYNT has destroyed its peer group, beating the index by nearly 50% over the past year, and by nearly 70% since March. This sort of outperformance is unlikely to occur for the long-term simply because the numbers are so large, but I see JYNT has a high-growth company in a sector where that isn’t commonplace.

It’s all about the growth

JYNT is priced fully today, but that’s because its market opportunity is vast, and importantly, it is executing against its potential. The company is a chain of chiropractic offices in about two-thirds of US states, with more than 500 locations. The vast majority are franchised, but some are company-owned/managed units. This model is similar to the one employed by various fast food chains, for example. 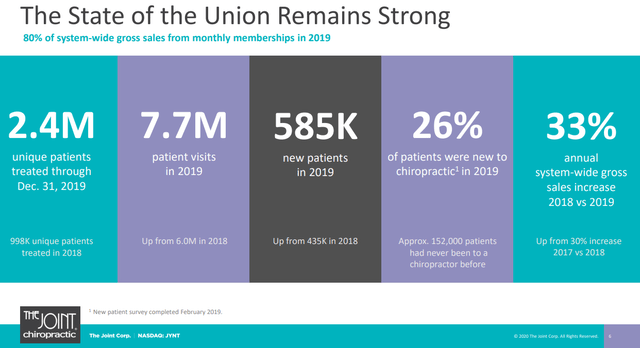 The company’s unique patient count more than doubled in 2019, total visits were up ~28%, new patients soared, and system-wide sales were up 33%. These are big numbers, and they are due in large part to footprint growth for JYNT.

The company has been aggressively selling franchise licenses in order to expand its footprint in the US, gaining scale in an industry that has essentially none. 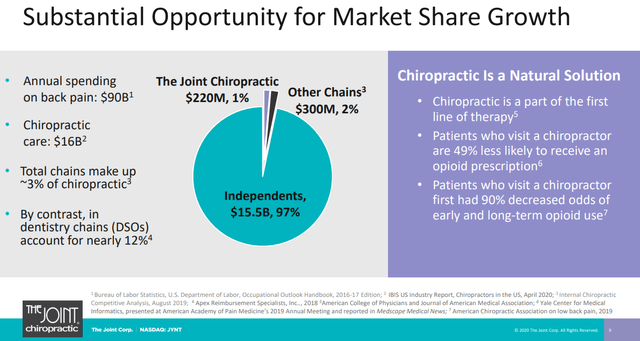 JYNT reckons spending on back pain is around $90 billion annually, with $16 billion of that on chiropractic care. As you can see, substantially all of the revenue generated in chiropractic care is from independents, which are simply neighborhood chiropractors that setup shop for themselves. JYNT is taking that model and scaling it, gaining marketing and best practice expertise it can share with franchisees across the country, and collecting lucrative fees in the process. The market opportunity is exponential for JYNT if it can execute properly.

Part of that strategy, as I mentioned, is to aggressively expand the footprint. 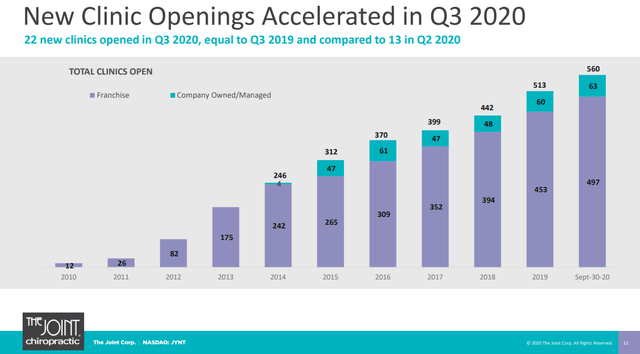 JYNT has been opening 50 to 60 offices annually, or about five per month. The pace of new licenses slowed with COVID outbreaks, which is to be expected. However, new license sales are approaching pre-COVID levels as of Q3, so it certainly appears demand for the licenses is intact. 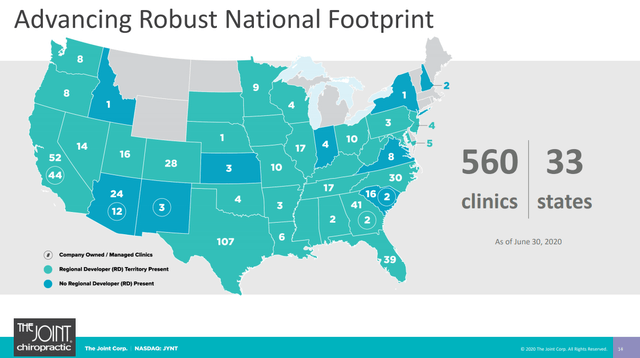 The opportunity for JYNT is huge, as it currently has less than 600 stores, but believes its total opportunity is about 1,800. That ~3X store count will go a long way towards producing revenue growth, but over time, as the concept scales, we should see margin leverage come into play as well. JYNT is too small for that to occur just yet, and it is spending aggressively to grow. But when the footprint is mature, I expect much stronger margins to begin accruing.

The investment case for a chiropractor that is considering opening a location is improving as well, which should only serve to speed up the footprint expansion process. 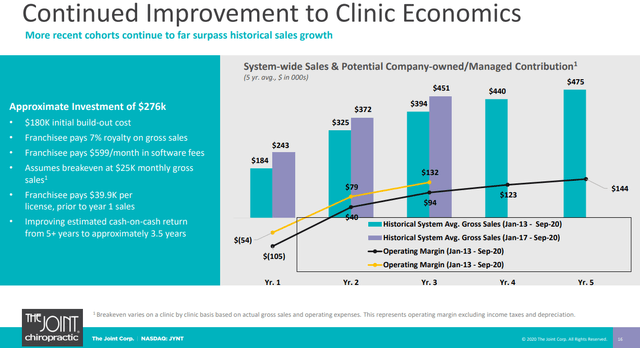 The unit economics of a The Joint Chiropractor office steadily improve over time. Sales start out at ~$250k annually, which is slightly below that of the breakeven level that JYNT has identified, which is about $300k in annual sales. However, sales ramp quickly into year 2 and beyond, with year 5 offering $475k in sales, on average.

That means that by year 5, JYNT is receiving ~$33k annually in revenue royalties from each franchisee, in addition to ~$7k in annual software fees. That works out to recurring revenue of ~$40k per location, so if JYNT expands to 1,800 locations, we’d be looking at $72M in annual recurring revenue as a baseline. That assumes that none of the consumer adoption techniques the company is working on bear any fruit, and that $475k is the max per location.

However, there is cause for optimism in terms of raising that $475k ceiling per location.

Even this year, when COVID has disrupted operations significantly, JYNT is seeing a 12% increase in comparable sales for stores with at least 13 months of operating history. For stores that are at least four years old – which is when they are supposed to be mature – JYNT is seeing 7% comp sales gains. That’s why I think $475k is too low, and that there is significant upside over time, even after the store base is built out.

Keep in mind also that as a chain scales, brand awareness increases. Thus, it creates something like a snowball effect in terms of generating buzz for the company’s services, so there is no reason to think these comparable sales gains are temporary.

I also see JYNT as having significant competitive advantages in an industry that hasn’t evolved in, well, forever. 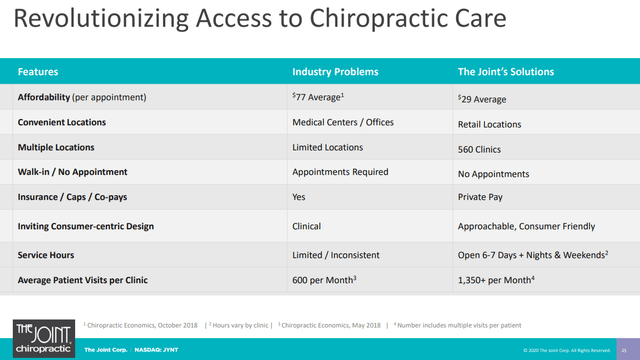 The standard, old-style chiropractic office requires an appointment, and is generally quite expensive, even if you have decent medical insurance. I know this firsthand as my wife has been visiting chiropractors for years, and finding one that takes insurance is difficult, and even when we can find one, it is anything but cheap.

JYNT has very low rates, requires no appointment, and offers longer hours than a typical 9 to 5 doctor’s office. That is a big reason why JYNT believes its offices seen ~2X the patients per month that an old-style chiropractor sees.

The lower price point and easier approachability of JYNT’s offices means that its goal of spreading chiropractic care to the masses should be easier than a traditional model.

Let’s look at some numbers

Revenue growth has been absolutely outstanding for JYNT, as it has successfully executed against its scale plans.

Revenue is moving up sharply each year, and estimates are for that to continue essentially indefinitely. Given the company can 3X its current store count, and that it continues to see robust comparable sales growth, I see JYNT as having years and years of strong revenue growth in front of it.

As you’d expect for a small and growing company, profits were elusive for some time. However, last year was the company’s first meaningful profit, and the gains are expected to continue to accrue at high rates of growth. 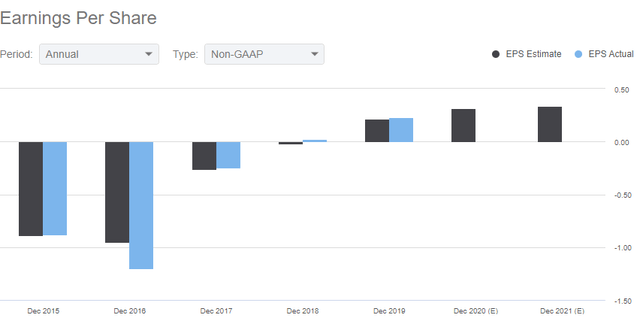 I mentioned JYNT is spending to grow at this point, and given how well the expansion has gone thus far, that seems plenty prudent to me. At some point – and I don’t know when this will be – JYNT won’t have to spend as heavily and will be able to instead begin to build margins via higher revenue and lower relative expenses. This is likely years out considering the store base expansion plans, but that’s the playbook JYNT is following. It has worked for countless other companies, and I see a lot of reasons why it should work for JYNT.

Given where JYNT is in its growth cycle, valuing it based upon earnings is a bit pointless. Instead, let’s take a look at EV/sales, which I have below for the past five years.

JYNT’s multiple soared in early 2019 when it became clear the company’s expansion plans were working, and EV/sales went from ~3 to ~6. We are back at nearly 6 times EV to sales today, so I wouldn’t say JYNT is necessarily cheap. However, as growth continues, and as sizable profits begin to accrue, there is no reason why we shouldn’t be able to maintain or grow that multiple over time.

Even if the multiple remains the same, sales are expected to grow at 20%+ annually for the foreseeable future, so the share price should theoretically grow by the same amount, if the multiple remains steady. That’s the base case, but I also think that as profits begin to accrue, and JYNT shows the model can mature and produce better margins, we may see an even better multiple. I want to make it clear we do not need a higher multiple for the bull case to work; that would simply be a bonus.

JYNT is producing outstanding growth in a sector where that can be hard to come by. Its model is differentiated and improves on a traditional process that is a long way from being customer-friendly. JYNT is an approachable way for consumers to receive back pain care, and the market is enormous. I see the growth runway as years-long, and despite the relatively high valuation, JYNT is a buy.

Disclosure: I/we have no positions in any stocks mentioned, but may initiate a long position in JYNT over the next 72 hours. I wrote this article myself, and it expresses my own opinions. I am not receiving compensation for it (other than from Seeking Alpha). I have no business relationship with any company whose stock is mentioned in this article.