Furthermore, stocks are poised to bounce back from that temporary retreat after stimulus measures. Additionally, in the medium term, some forthcoming developments in the utilities sector point to higher valuations.

First, for investors in general and those investing in tech in particular, it is important to have a look at the reasons for including utilities as part of the portfolio.

The appeal of utilities

Investors turn to utilities because they want returns. With the Federal Reserve keeping interest rates low for so long, there isn’t much return in fixed income. This leaves utility stocks as one of the best places to find yield.

As a sector, despite underperforming the S&P 500 index, which is now quite tilted towards tech, utilities grew 25% in the past nine months, outperforming financials.

As seen during the last one month, there is no guarantee that this trend will continue, but investing in utilities still makes sense from a diversification point of view. For this matter, XLU tracks the price and performance of the Select Utilities sector index. Its net assets are nearly $12 billion and its management expense ratio is 0.13%.

Now, some investors primarily opt for issuers which charge less. This is a good strategy to limit overheads but a better one is to also consider the distributions to shareholders, more specifically the dividend growth as these funds are generally held for years.

In this case, while dividend yields currently hover around the 3 to 3.26% range, the State Street issuers have been able to grow dividends for 10 years resulting in a four-year average yield of 3.29%, the highest. 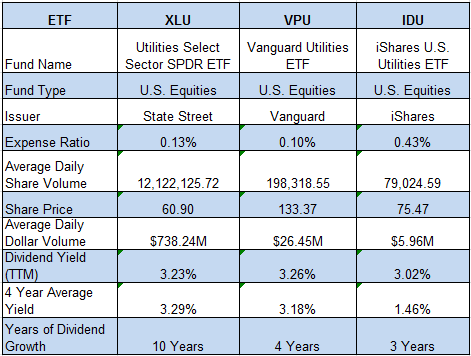 On the other hand, for those who lay more emphasis on market fluctuations, XLU exhibits more concentration risks with only 30 stocks and 64% of assets limited to the top ten holdings. However, at a beta of only 0.85, XLU is less volatile than the overall market, normally exemplified by the S&P 500 index.

Also, the fact that XLU’s normal average daily share volume, at 12 million, outpaces peers by far, shows more confidence on the ability of the ETF by the market.

Looking from the wider perspective, utilities have a reputation of being the slow moving constituents of the equity market but this did not prevent the sector to outperform the S&P 500 Index during the COVID-related selloff in the spring.

Moreover, in terms of share price performance, XLU is more of a longer term play with a five-year investment horizon. 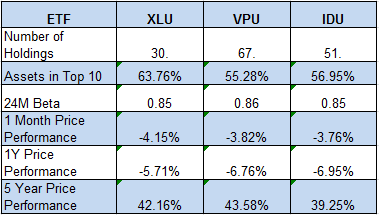 In addition to investing in XLU, some can invest in one of the ETF’s individual holdings like Dominion Energy (D) with impressive revenue growth. However, the company has cut down on yields while peers like the Southern Company (SO) and American Electric Power Company (AEP) have consistently grown dividends for decades. Therefore, as a combined offering, XLU provides for both income and capital appreciation with the latter benefiting from changing market dynamics in electricity generation and distribution.

When talking about the electric vehicle market, most refer to the flashy battery powered cars from Tesla (TSLA) but few talk about charging infrastructure where the U.S. lags both China and Europe, according to a report by Wood Mackenzie.

The report further adds that supportive policies and innovation in these markets are leading to rapid development of electric vehicles’ charging installations. It is estimated that by 2030, there will be 10.8 million stations in North America up from 1.3 million in 2019.

Looking deeper, with investments in charging infrastructure expected to exceed $29 billion over the next seven years, a battle is unfolding as to who should control charging stations that are expected to gradually replace gas pumps.

Hence, utilities like Exelon (EXC) are seeking authorization from regulators to invest in modernizing their facilities in order to be prepared for the development of electric charging. 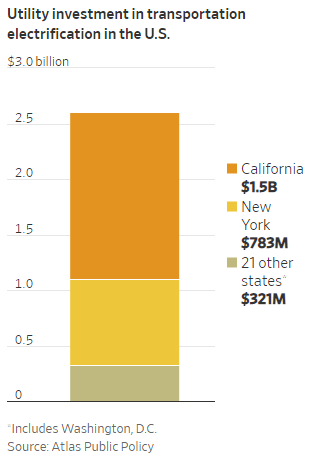 While these plans are being opposed by consumer groups on electricity pricing grounds and oil companies fearing competitors to be subsidized by states, it remains a fact that broader adoption of electric vehicles will require boosting of charging infrastructure.

However, energy utilities, in contrast with oil majors do not operate in a normal free market system where profits are only determined by consumers’ ability to pay. Rather, they can be viewed as monopolies, regulated through price fixing for consumers by public officials across the U.S. Thus, utilities have to go beyond the price paradigm to make profits and this is the reason why larger the infrastructure built, higher are the profits which can be generated.

Still, given that more states are opening up to the idea of utilities adopting a wider role in the charging industry in comparison to start-ups which have focused more on the innovative technology side, there should be considerable investments in this sector.

On the other hand, investors should be aware that given debates within regulatory commissions and states about the roles startups and oil companies should play in charging stations, it will not be a smooth ride for utilities.

Given that economics of renewable energy have changed and society has become more concerned about emissions, investment dynamics are changing as solar and wind energy have to form a more significant part of the energy mix.

Also, regulation means that utilities are limited in what they can spend unless there is a change in policy.

In this context, given the commitment of the Democrats to green energy, utilities would likely need to invest in technology to meet new environmental standards. Now, depending on how efficiently investments are made, this could all lead to earnings growth.

Investigating deeper, NextEra Energy, XLU’s largest holding at 16.5% has been selected by analysts at Bank of America (BAC) to be included among the top utilities sector’s stocks for 2021. The reason provided is that the company will “benefit from a shift to renewable/alternative energy”.

Also, there have been more inflows, at about $323.2 million as from December 14 in XLU, which represents a 2.8% increase week over week in outstanding units.

However, the inflows have subsided as utility companies across the U.S. have allowed COVID-affected residential and small business customers to defer payment on their power bills without the threat of losing service. Now, according to UtilityDrive.com, residential and small business customers could owe as much as $40 billion to their utilities by next March.

Therefore, that huge debt has been weighing on the sector but XLU formed part of the broad stock rally during mid-December as a result of stimulus negotiations in the congress.

Consequently, stimulus measures when voted should have an overall positive impact as millions of Americans who lost their jobs during the pandemic will have money to pay rent and utility bills.

Furthermore, XLU is currently trading at a premium to NAV but at more than 13 million daily trades, spreads are low at 0.02%. 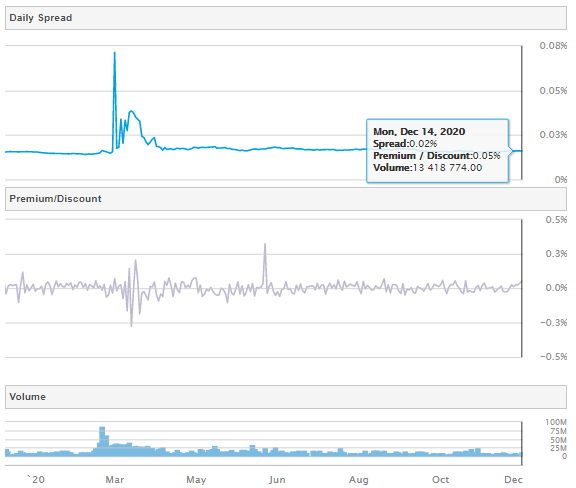 Current Price to Earnings ratio is at 21.28, far from the 85.17 of the Global X Autonomous & Electric Vehicles ETF (DRIV) which seeks to invest in companies involved in the development of autonomous mobility technology, electric vehicles, EV components and materials.

Thus, the medium term price target is $68-70, after a volatile end-of-year as politicians are embroiled in a tussle as to the amount each U.S. citizen needing fiscal support should perceive.

Going forward, just like the names tied to electrification, including Tesla and General Motors (GM) more recently, utilities that provide infrastructure around the electrification of the transportation fleet should benefit from higher valuations as from January 2021 after change of tenant in the White House.

Finally, the average dividend payout ratio of XLU’s first six stocks, constituting nearly half of holdings is at 67.5% which when viewed in light of forthcoming stimulus measures, signifies that dividends are safe.

Equally important, for growth investors, with an average long term debt to capital ratio of 51% for its first six holdings, XLU merits a closer look.

Additional disclosure: This is an investment thesis and is intended for informational purposes. Investors are kindly requested to do additional research before investing.

EUR/USD Rate Talking Points EUR/USD struggles to preserve the advance following the European Central Bank’s (ECB) first meeting for 2021 as the US Dollar appreciates on the back of waning investor confidence, and the exchange […]

© Reuters. By Yasin Ebrahim Investing.com – The Dow moved off session lows on Monday, as declines in cyclical stocks were offset by strength in technology ahead of a busy week of market-moving data from […]