Yesterday, the IMF projected India as the only major economy with double digit growth in 2021 which puts the Asian powerhouse on track toward the ‘$5 trillion economy’ status. Lockdown measures implemented by Indian government were viewed positively by the IMF as a better than expected economic recovery ensued after the lockdown period.

This reflected well today with the Indian Rupee appreciating 0.14% against the greenback (at the time of writing). Analysts and economists alike are now favoring a V-shaped recovery for the emerging market which could bode well for the local currency going forward.

FOMC guidance given in December’s meeting will likely continue today as Federal Reserve Chair Jerome Powell is due to address the public after the two-day policy meeting. Persisting with interest rates near zero along with a continuation of the bond buying initiative ($120 million monthly) is expected. Until such time as an improvement in employment and inflation data is seen, the FOMC will presumably continue with the current policy approach. This dovish stance could lead to further downside on the USD/INR pair due to Dollar weakness.

The worlds largest inoculation strategy is underway but many frontline workers are cautious around the safety of the vaccines. This could prolong India’s plan to vaccinate approximately 300 million people by July 2021 and reduce vaccine optimism which could hamper economic growth projections. 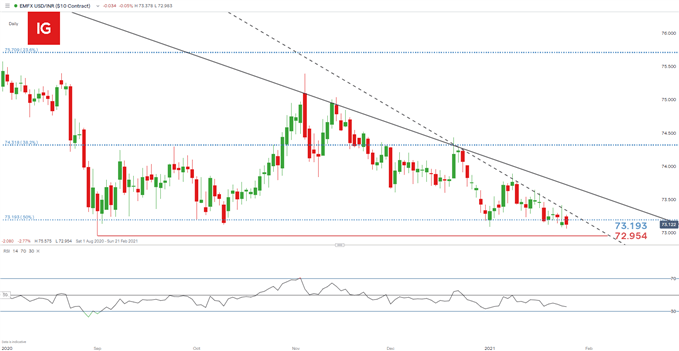 Previous support target (73.139) was breached as mentioned in my previous article which further emphasizes the 50% Fibonacci level. The steeper downtrend (dashed black line) has now established itself with multiple daily candles serving as confirmation. With the U.S. Dollar heavily influencing price action on EMs including the Indian Rupee, short-term volatility is expected with several high impact economic events schedule this week. Upside will require a break of the near term downtrend with subsequent resistance provided by medium-term resistance (solid black line).

USD/INR bears will be focused on a confirmation break below current support (73.139) succeeded by the 72.954 September 2020 swing low.

The Relative Strength Index (RSI) suggests a bearish bias which favors further downside but is slowly approaching oversold territory. This could mean a cap on the downside for INR bulls which may indicate a range between 72.439 – 73.500 short-term.

U.S. DATA IN THE SPOTLIGHT THIS WEEK

Several economic announcements present this week from the U.S. which could spark market-wide volatility depending on actual figures. The Fed Interest rate decision later today and GDP figures tomorrow will be the main focus for market participants however, any significant deviation from estimates through all events below could source large price fluctuations. 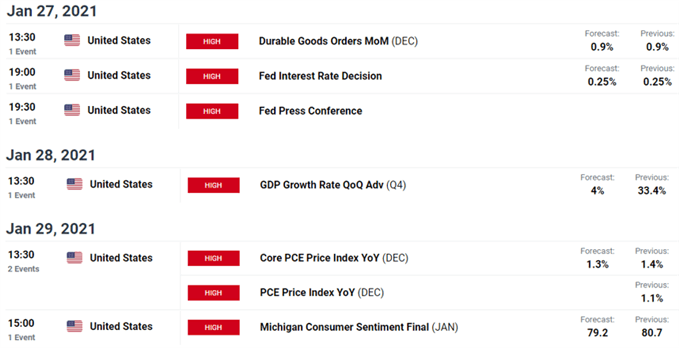 Oil Price Talking Points The price of oil trades to a fresh yearly high ($63.79) despite an unexpected rise in US crude inventories, with the technical outlook clouded with mixed signals as the Relative Strength […]

© Reuters. By Gina Lee Investing.com – Asia Pacific stocks were down Friday morning, with global bonds started to stabilize from an aggressive selloff that drove steep losses in U.S. shares. Japan’s slid 2.29% by […]