During this volatility, the RBA doubled its typical QE purchase size in order to maintain its yield target on the 3-year Australian Government bond. The RBA then held its monetary policy unchanged on Tuesday.

The ASX 200, Australia’s leading market index, hit a pandemic high around 6,900 in mid-February before edging slightly lower. The index dropped to a nearly one-month low around 6,660 during the volatility episode but sprung back as markets stabilized, rebounding to an early Tuesday high of 6,850. The index then slipped lower throughout Tuesday’s trading session as risk sentiment remains mixed.

Despite the recent pandemic highs set in mid-February, strength from the ASX 200 seems to have exhausted itself for the time being. The index had its last strong move higher in November before trading mostly sideways into the new year.

While the ASX 200 has failed to reclaim its pre-pandemic highs, the Nikkei 225 has climbed far above its early 2020 levels. The Nikkei has risen by over 20% from the February highs. When it rose above the 30,000 level in mid-February, it was doing so for the first time since 1990, when the Japanese bubble was deflating.

The Nikkei hit a 30 year high around 30,600 on February 16th before slowly slipping back downward through the second half of the month. As sharp movements in government bond yields drove general market volatility in the last week of February, the Nikkei dropped back below the 30,000 mark. 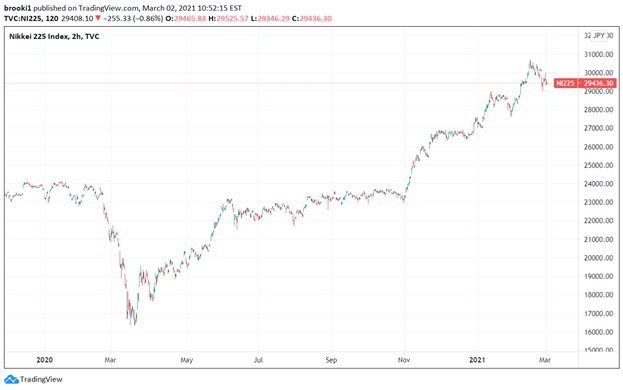 After an early morning attempt at the 30,000 level on Tuesday, the Nikkei edged lower to consolidate around the 29,400 level throughout the afternoon. A weak session in US equities may spill over into this index on Wednesday, potentially driving further selling pressure. The 29,000 level provided a key level of support during late February’s bond market volatility and could come into play again this week if selling pressure builds.