Wall Street equities closed mixed on Monday, with the Dow Jones continuing to outperform the tech-heavy Nasdaq 100. President Joe Biden will announce a massive $3-4 trillion infrastructure and job-creating plan on Wednesday, boosting reflation hopes further. He also said that 90% of US adults will be eligible to Covid-19 vaccines, which buoyed market confidence about a faster pace of reopening. Meanwhile, hedge fund Archegos’ forced liquidation led to concerns about its ripple effect across financial markets, weighing on bank stocks.

A rapid US recovery narrative eclipsed a potential third viral wave in Europe, sending the DXY US Dollar index to a fresh four month high as the Euro continued its decline against the Greenback. A strengthening US Dollar may serve as a near-term headwind for Asia-Pacific emerging markets, which are likely to see capital inflows slowing. The prospects of another large US spending plan sent Treasury prices lower while yields higher, as markets foresee more issuance of government bonds to fund fiscal stimulus. The 10-year Treasury yield resurged to above 1.70%, potentially weighing on precious metals and risk assets.

A $20 billion forced liquidation of positions held by family office Archegos pulled several stocks sharply lower on Friday, including ViacomCBS, Discovery and Chinese ADRs Baidu, Tencent and Vipshop. Bank stocks declined on Monday as investors weighed their potential losses from this incident. Japan’s largest investment bank, Nomura, saw its stock price plunge 16% after it flagged an estimated $2 billion losses at its US subsidiary. Credit Suisse also warned “significant and material” impact from “a US-based hedge fund defaulting on margin calls”. Its share price tumbled 15% as a result. Other banks involved in the liquidation include Goldman Sachs, Morgan Stanley and Deutsche Bank.

Japan’s Nikkei 225 index opened modestly higher on Tuesday after the release of an upbeat jobless rate and retail sales figures. The unemployment rate came in at 2.9%, lower than a baseline forecast of 3.0%. Retail sales grew 3.1% MoM, smashing analysts’ forecast of a -0.5% decline.

Meanwhile, Bank of Japan Governor HaruhikoKuroda reassured markets that the central bank will continue to purchase ETFs and will not unload its huge stock holdings even after the pandemic subsides. His comment may help to lift market sentiment as the BoJ is the largest investor of Japanese stocks with more than $ 400 billion holdings.

Looking ahead, German inflation data headlines the economic docket alongside the US CB consumer confidence index. Find out more from theDailyFX calendar. 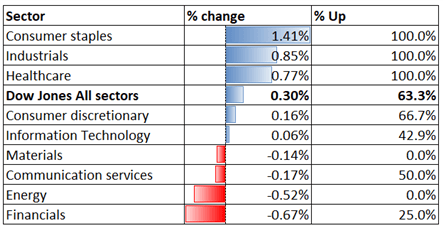 The Dow Jones indexbroke above the ceiling of the “Ascending Channel” for a second attempt this month, underscoring strong upward momentum. The index has also broken an immediate resistance level at 32,863 (the 100% Fibonacci extension) and thus opened the door for further upside potential with an eye on 33,954 (127.2% Fibonacci extension). The overall trend remains bullish-biased as suggested by the upward-sloped moving averages. A bearish MACD divergence however, suggests that a near-term pullback is possible.

The Nikkei 225 index bounced off an immediate support level at 28,357 (100% Fibonacci extension). The index appeared to be range-bound between this level and 30,214 ( the 127.2% Fibonacci extension) since mid-February. The 20-day SMA lines is about to cross below the 50-day line, potentially forming a bearish crossover. The MACD indicator is trending lower, suggesting that near-term momentum is tilted to the downside. 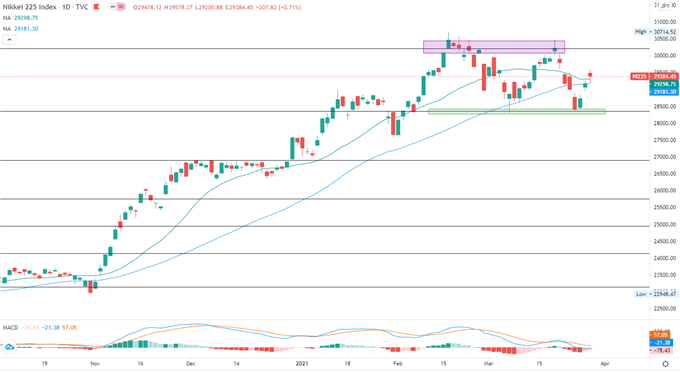 The ASX 200 index remains in an “Ascending Channel” but upward momentum appears to be fading as suggested by the downward-sloped MACD indicator. The overall trend remains bullish as suggested by upward-sloped 50- and 100-day SMA lines. Holding above 6,730 – the 161.8% Fibonacci extension level – may pave the way for further upside potential towards 6,935 – the 200% Fibonacci extension.