PCE RECAP: With economic data currently playing second-fiddle to driving markets in the very near-term as we approach the month/quarter-end. The PCE data had been met with a relatively muted reaction, the monthly core PCE reading rose 0.1%, taking the yearly rate to 1.4% and thus slightly missing expectations of 1.5%. Meanwhile, the headline figure rose 0.2% on the month with the yearly rate at 1.6%. Going forward, it has been well documented that inflation risks are tilted to the upside, largely on the premise of base effects, the question is whether this is merely a transient spike or a more meaningful surge.

How to Trade After a News Release

The US Dollar has made a key technical break with the crossover of its 200DMA and indicator that has not been traded above since May. While an unwind of crowded short positioning has aided the greenback, alongside US growth forecasts and yield differentials remaining USD positive, the question being asked is whether we are heading for another period of US exceptionalism, particularly as Europe head towards a third Covid wave. In the short run, as I mentioned earlier, rebalancing flows are likely to be USD positive heading into month/quarter-end. Regarding the medium-term outlook, unlike in 2018, the US is not waging a trade war with China, while the Federal Reserve’s average inflation targeting sees the Fed remaining dovish for the time being with June being the key decider for Fed policy as dot plots are once again revised. 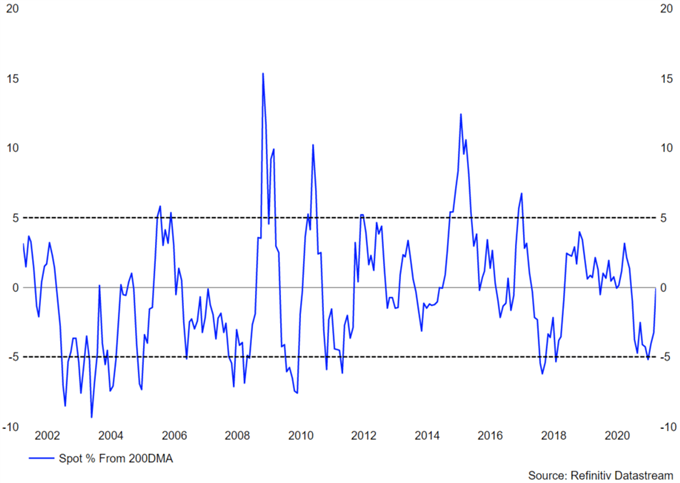