WHAT IS THE SUEZ CANAL?

The Suez Canal is among the top chokepoints for global oil trade, other key waterways include the Strait of Hormuz. The Suez Canal is the quickest sea route between Asia and Europe, which connects the Reds Sea and Mediterranean sea.

WHY IS THE SUEZ CANAL IMPORTANT?

According to the EIA, roughly 9% of total seaborne oil passes through the waterway, while Vortexa notes that the top 3 exporters of crude through the Suez Canal is Russia (546kbpd), Saudi Arabia (410kbpd) and Iraq (400kbpd), with the top 3 importers being India (490kbpd), China (420kbpd), and South Korea (380kbpd).

A skyscraper-sized container ship, Even Given (400 meters long), has become wedged sideways in the narrowest path of the Suez Canal, subsequently blocking the pathway for other vessels and tankers to pass. As such, Vortexa has estimated that as many as 10 tankers carrying 13mbpd could be affected by the traffic disruption, which in turn has provided modest support for oil prices in the face of the recent bearish trend.

How to Trade Oil 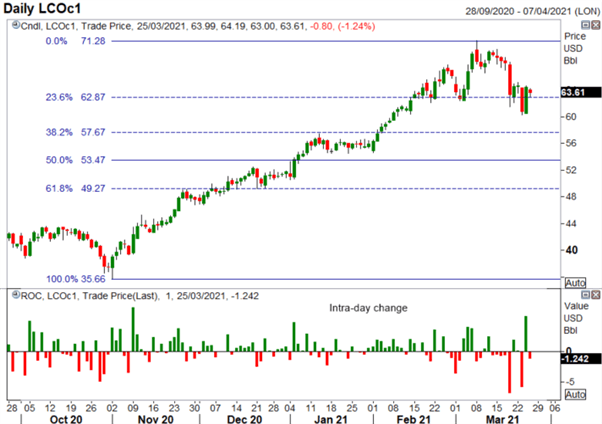