The outlook for AUD/USD remains mired by a head-and-shoulders formation amid the failed attempt to defend the February low (0.7564), but the Reserve Bank of Australia (RBA) interest rate decision may shore up the exchange rate if the central bank alters the forward guidance for monetary policy.

AUD/USD Trades Within Head-and-Shoulders Formation Ahead of RBA

AUD/USD carves a series of higher highs and lows ahead of the RBA meeting as the board is widely expected to keep the official cash rate (OCR) at the record low of 0.10%, and it seems as though the central bank is in no rush to conclude its quantitative easing (QE) program as “a further $100 billion will be purchased following the completion of the initial program.”

More of the same from the RBA may drag on AUD/USD as the board pledges to “not increase the cash rate until actual inflation is sustainably within the 2 to 3 per cent target range,” and it remains to be seen if the central bank will utilize its emergency measures throughout 2021 as the update to Australia’s Employment report shows the economy adding 88.7K jobs in March versus expectations of a 30.0K rise.

As a result, the RBA may show a greater willingness to shift gears as the central bank acknowledges that “market participants had brought forward their expectations for an increase in policy rates in a number of economies, including Australia,” and a batch of less dovish remarks from Governor Philip Lowe and Co. may generate a bullish reaction in the Australian Dollar if the board starts to adjust the forward guidance.

In turn, the decline from the February high (0.8007) may turn out to be a correction in the broader trend rather than a change in AUD/USD behavior as the measured move for the head-and-shoulders formation has yet to play out, and the recent flip in retail sentiment may also end up being short-lived like the activity seen in 2020. 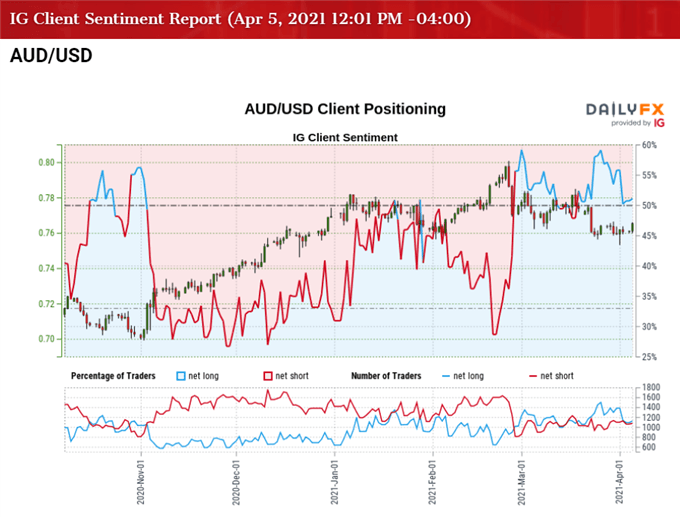 The IG Client Sentiment report shows 52.54% of traders are currently net-long AUD/USD, with the ratio of traders long to short standing at 1.11 to 1.

The number of traders net-long is 11.10% higher than yesterday and 9.69% lower from last week, while the number of traders net-short is 3.21% higher than yesterday and 0.09% higher from last week. The IG Client Sentiment index has narrowed from 54.55% during the previous week amid the decline in net-long interest, while the small rise in net-short position comes as AUD/USD fails to defend the February low (0.7564).

With that said, the shift in retail sentiment may persist as AUD/USD trades within a head-and-shoulders formation, but the failed attempt to close below the neckline may generate a larger rebound in the exchange rate, with the Relative Strength Index (RSI) reflecting a similar dynamic as the oscillator breaks out of the downward trend from earlier this year.