CHF/JPY Struggles to Break Resistance Around 118.60, What’s Next?

CHF/JPY hit its highest level since early 2016 in February, rising to briefly trade around the 118.80 level. The pair met resistance around this multi-year high and grinded back lower, falling to support around the 116.00 level.

Another attempt on 118.00 in mid-March met a similar fate, sliding back to the 116.00 level. From this March 23rd low, the pair steadily strengthened through mid-April, rising as high as 118.70 before meeting resistance and turning slightly lower. Over the following week, price action whipsawed between 118.60 and 117.70, with attempts higher quickly rejected.

The pair slipped to a fresh two week low on April 21st, falling to 117.60. While further attempts at 118.60 may be in store for the near future, the longer-term outlook for the pair is looking mixed which lends itself to range trading strategies. 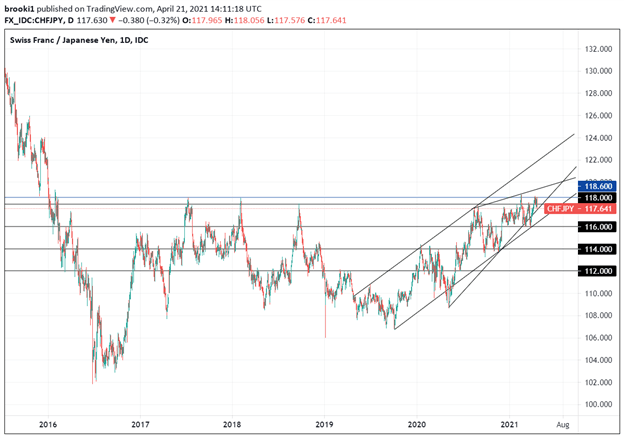 While CHF/JPY has trended higher since the March 2020 lows around 109.00, there may not be much remaining in the way of further strength. In 2021, the pair has mainly consolidated between the 116.00 and the 118.00 level, with a failed attempt at breaking to new multi-year highs in February. With another attempt at the 118.50 level rejected in mid-April, further downside may be lurking.